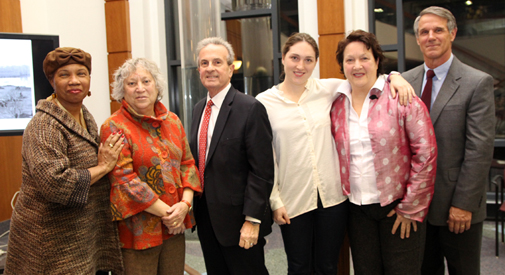 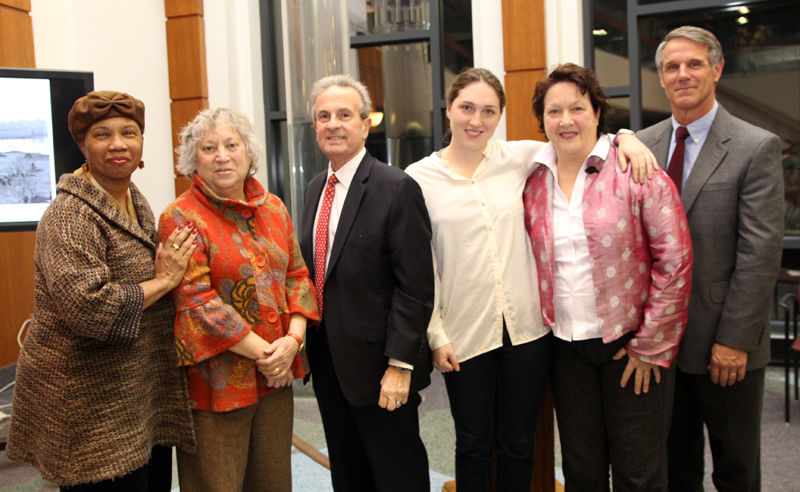 From the City of Cambridge, Jan. 21, 2016: City officials presented the year’s Fresh Pond Stewardship Awards to former mayor and city councillor Henrietta Davis and the late Chip Norton, who served as Watershed Manager from 1991-2014. Both were recognized for their environmental stewardship and long-standing commitment to the Fresh Pond Reservation and their overall efforts to help preserve, protect and maintain this natural resource and its 11,730 linear feet of accessible paths.

Davis served as a councillor for 16 years and was a prominent steward of Fresh Pond Reservation throughout. Davis came up with the idea that led to the establishment of the annual Fresh Pond Day to celebrate the reservation and educate residents about the wildlife habitat that protects the city’s drinking water supply and provides the community with a large open space and green, recreational oasis. When the Fresh Pond Master Plan was being developed, Davis supported and helped preserve the Maynard Ecology Center, which educates Cambridge school children about the benefits of nature, wildlife, plants and the water cycle.

“Henrietta helped pave the way for so many of the ‘green’ policies we have today,” City Manager Richard C. Rossi said. “When I think of all she has done to help us preserve this great open space, this award is well deserved.”

“I can’t think of a better way to acknowledge and honor Chip for all he contributed to this precious natural resource we have to enjoy,” said Water Department Managing Director Sam Corda, who also thanked Chip’s family for attending the ceremony and accepting the posthumous award.

“I am so pleased to be here today to honor these recipients for the legacy they are leaving for our children,” Mayor E. Denise Simmons said. “Thanks to all our stewards who help keep this jewel so vibrant.”