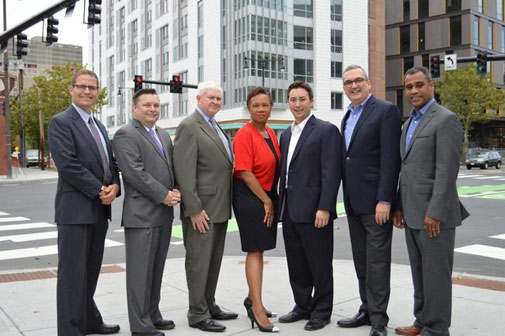 The seven-member “Unity Slate” of reelection candidates formed in the run-up to last year’s City Council elections did not violate the state’s Open Meeting Law, the Massachusetts Attorney General’s Office has found in a decision dated Monday. The decision is in response to a complaint filed in September by council candidate Ilan Levy of East Cambridge.

The decision was posted to the AG’s website today and was written by Kevin W. Manganaro, an assistant attorney general in the office’s Division of Open Government.

The Unity Slate was made up of then-mayor David Maher and councillors Dennis Benzan, Leland Cheung, Craig Kelley, Marc McGovern, E. Denise Simmons and Tim Toomey; it was announced in a Sept. 9 Cambridge Chronicle article. All members were reelected in the November council election except for Benzan. The slate excluded incumbents Dennis Carlone and Nadeem Mazen, who were also reelected.

“While it is true that a quorum of the council engaged in discussions outside of noticed meetings, we find that these discussions did not concern ‘public business within [the council’s] jurisdiction,’” Manganaro wrote.

Saying that the “magic of this decision lies in the footnotes,” Levy said he was “extremely surprised” that the slate met 15 times between July and October, as revealed in Manganaro’s decision. He said many of the

slate meetings were on the same as days as council or subcommittee meetings, and “it seems kind of amazing that they would not discuss any ongoing City Council business.” Levy was also concerned that neither the councillors nor their staff took any notes at the 15 meetings, according to the decision.

Levy had alleged in his complaint that “the seven councillors exchanged views on a wide range of major issues, from affordable housing, to residential tax rates, to their joint current and future collaboration on these issues. Such communications involved questions of public improvements, finances and the body’s own leadership – business that falls squarely within the [council’s] jurisdiction.”

But the list of priorities for the slate listed in the Chronicle article was produced by the slate’s campaign manager, Brian Muldoon, “based on the individual websites and past speeches” of the members, the decision said.

“Statements made by public body members for political purposes that do not involve matters presently or likely to come under consideration by the public body in the future are not communications on public business within the jurisdiction of the body, regardless of whether they are made by an individual public body member or by the members collectively,” Manganaro said in the decision.

“Here, the discussions that took place during the Unity Slate meetings concerned the political campaign activities of the Unity Slate members and not the business of the council. Further, the list of priorities included in the Cambridge Chronicle article was prepared by the shared campaign manager and did not reflect the result of deliberation among the candidates. For these reasons, we find that the council members at issue did not violate the Open Meeting Law.”

Levy also expressed concern that city councillors had already secretly agreed to renew the city manager’s contract for one year, but that he would not be able to meet the standard of proof to succeed in an Open Meeting Law complaint. On Monday, the council passed a late policy order starting negotiations with Richard C. Rossi to continue his employment as manager.

According to a list on the AG’s website, there remains one pending OML complaint about the council – from candidates Kim Courtney and Xavier Dietrich regarding the accuracy of minutes of an Aug. 10, 2015, meeting that the council halted while Courtney and Dietrich spoke. Additionally, Hasson Rashid filed a complaint in January regarding a deal between the council and Boston Properties to ensure homeownership units (rather than rentals) in Kendall Square. Rashid’s complaint does not yet appear on the list.

Mazen said he thought the current council was “far and away more collaborative, more engaged and more sensitive to public input than it felt last term. So irrespective of what happened on the campaign trail, I can say with some confidence that the body is healthier with that behind us.”