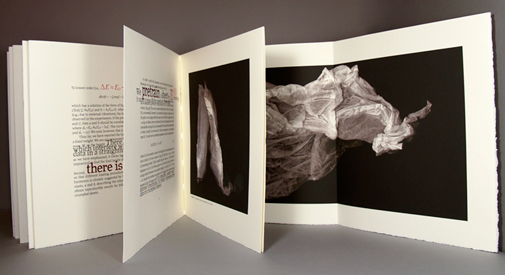 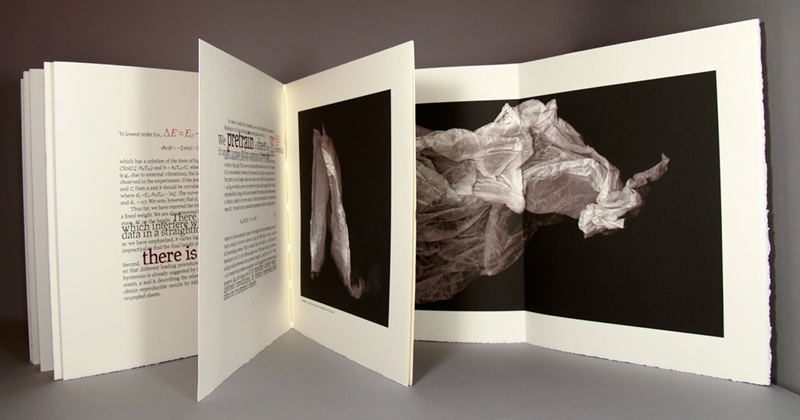 Rutherford Witthus’ “Crumpling a thin sheet” will be exhibited starting Thursday at “Reading with the Senses,” an exhibit at Lesley University.

There are pages of solid black to represent grief in the novel “Tristram Shandy,” first published by Laurence Sterne in 1759, and endless typographic manipulation in the 2000 novel “House of Leaves” by Mark Z. Danielewski meant to reflect the mystery of the manuscript and its inexplicable topic – a house that swallows people into its endless architecture.

But those are child’s play compared with the 54 books in “Reading with the Senses,” an exhibit opening Thursday in Lesley University’s Roberts Gallery. Rutherford Witthus’ “Crumpling a thin sheet” takes those typographic tricks of Danielewski’s as a starting point and applies them to the text of four authors exploring chance in the form of crumpled sheets, adding images and even fold-out pages, for a book with only 11 copies; “In Visible Cities” had a print run of 73 for its textural rendering of the work of three poets – in hand-set type on handmade paper. 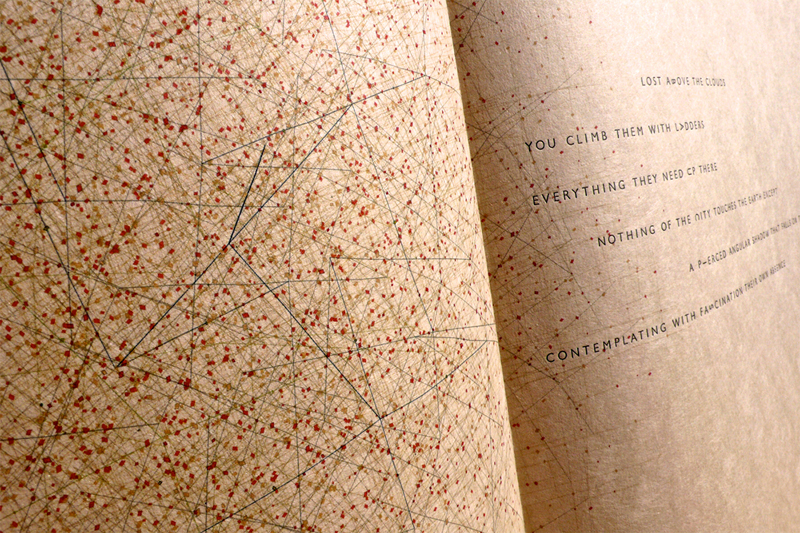 “In Visible Cities” by Harry Reese, Sandra Liddell Reese and Jean-Pierre Hébert is also on display at the exhibit.

As explained by Ruth R. Rogers, curator of special collections at Wellesley College and of this exhibit, these volumes of “artists’ books” were chosen because they challenge readers to see and comprehend their meaning “not through one dimension, such as text, but through the merging and blending of all their elements: form, materials, color, texture, words and image.”

“Whether consciously or not, the viewer is asked to read and comprehend not by text alone, but with our senses,” Rogers said of her selections.

There’s a bit of a redemptive spirit in the collection, she suggested, because “as a genre, artists’ books are primarily viewed in terms of their nontraditional structures and materials, privileging them as ‘art’ but isolating them from the central act of reading.” 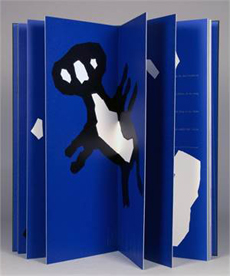 Anja Harms’ “Peleus,” which sold at auction last year for $438, will be exhibited.

But the books in “Reading with the Senses” – hybrids of the traditional book and visual art – makes an argument for their importance just as video games and other filmed entertainment are moving into the realm of virtual reality despite not quite conquering the medium of 3-D first.

“At a time when the dissociation of text and physical book is ever increasing through digital devices, artist-made books continue to engage the reader’s senses in ways that are both ancient and novel: meditative, haptic and associative,” said Rogers, who oversees a collection of more than 40,000 items – including rare books, medieval and renaissance manuscripts, modern fine press books and contemporary artists’ books – in her day job, specializing in the evolution of the book as culture, visual communication and artistic form and lecturing on the critical reading of artists’ books and their research potential in the academic curriculum.

She’ll be giving a curator’s talk at the Cambridge exhibit’s artists reception from 6 to 8 p.m. March 24 in the Lunder Arts Center, where the gallery is. A panel discussion, “What Do Books Awaken in Us?” is the other special event associated with the exhibit; it takes place from 6 to 7 p.m. April 14, followed by an associated student pop-up exhibition from 7 to 8 p.m.

“Reading with the Senses” is open through April 17. Lesley University’s Lunder Arts Center is at 1801 Massachusetts Ave., Porter Square.