‘10 Cloverfield Lane’: Chained to the wall, the end of the world and not much to go on 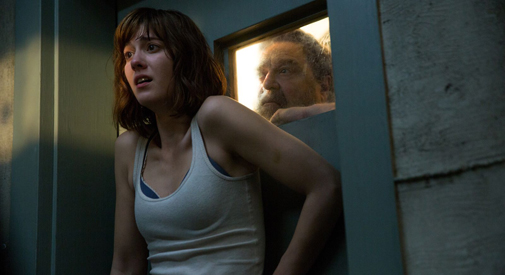 ‘10 Cloverfield Lane’: Chained to the wall, the end of the world and not much to go on

Secrecy surrounds the J.J. Abrams-produced “10 Cloverfield Lane.” This is a film that is best seen with little to no prior knowledge – the less you know, the better – but thrilling, terrifying and sporting one of the best “final girls” of the past decade, “10 Cloverfield Lane” has more to it than its giant-monster sibling from 2008 (called simply “Cloverfield”) may suggest. 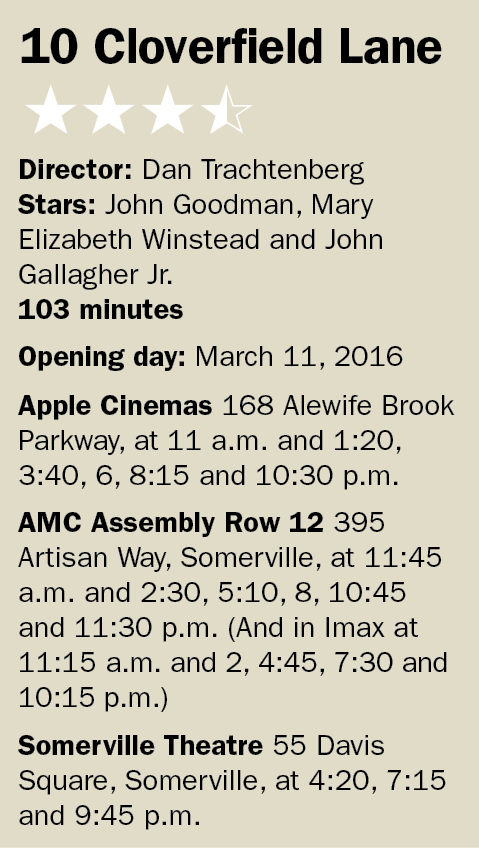 After awakening from a violent car accident, Michelle (Mary Elizabeth Winstead) finds herself in an abandoned cellar in an underground bunker and chained to the wall. Her captor (or savior, by his logic) Howard (an impossibly good John Goodman), tells Sarah that a chemical attack has taken place, that the air is contaminated and everyone she knows or loves is likely dead. Between being given just enough proof to be wary of the outdoors, the complication of a third bunker mate in Emmett (John Gallagher Jr.) and her general distrust of Howard, Michelle can’t tell what the truth is.

That’s all you should know before buying a ticket.

Striking a chord of unrest from the moment Michelle begins driving – in a nice and fitting Hitchcockian “Psycho” model where the camera pans in on her face as the sinister music grows louder with each moment – the film never lets us forget that we have found ourselves in a nightmare. Having been described as a sister piece to “Cloverfield” but more in atmosphere than universe, director Dan Trachtenberg thankfully does away with the found-footage and shaky-cam style of the original in favor of a stillness that accelerates the mounting dread and sense of claustrophobia. His style of shooting, along with the script by Josh Campbell and Matthew Stuecken, give the film its steady, rising heartbeat of a backbone. It’s script is a pressure cooker, building in anticipation and anxiety until the film lets loose. It’s easy to show the horror, harder to hint at it with sound and glimpses of the outside (and the sound design is excellent).

Over the past few years we’ve seen a resurgence of powerful leading ladies in the thriller and horror genre, of all things. From more strictly slasher films “You’re Next” and “It Follows” to indie darlings such as “The Final Girls” alongside the more ambivalent and moody “The Babadook” and “A Girl Walks Home Alone at Night,” the genre has surprisingly become a home for strong female characters. Winstead’s Michelle joins this growing group with a character who fails to fall into the Scream Queen trope and rather is unquestionably resourceful – someone you’d want on your side, leading the charge if the world were to seemingly crumble down around you.

Greater still than the empowerment given her through action and an agency that’s never stripped from her is the character-building she gets over the course of the film. At a lean running time, it wouldn’t have been surprising if the film had focused mainly on the shocks and jump scares, but instead spends quite a bit of time fleshing out its main trio, something Michelle benefits greatly from. We end up with a fully realized character whose past influences her decision-making as much as the crossroads she found herself in moments before the crash.

The cast is uniformly terrific, allowing three actors to play with the big back stories they’re given. Goodman’s Howard is terrifying in his uncertainty, almost always behaving in ways that read as threatening while also showcasing rare moments of levity. It’s that pendulum of uncertainty that keeps a sense of dread tangible – his belief of himself as the benevolent savior of Michelle, juxtaposed with the more threatening figure he imposes. Adding layers to Howard many actors wouldn’t think of, Goodman is a towering, unidentifiable presence in this film, giving way to the idea that the scariest monsters are the ones whose motives are unclear.

Gallagher is equally as good, if given less to do overall in playing Michelle’s fellow fearful strategist and Howard conspiracy theorist. Effortlessly charming though, Gallagher is a strong character actor and leaves a lasting impression.

Rather than relaxing by the film’s end, the third act only picks up the pace, as exciting to watch play out as it is horrific. Were there some contrivances taken to get one character from one point to another? Sure. And yes, the film is much more in the psychological thriller genre vein, so  hardcore horror fans may be disappointed. But it barely diminishes the shine of the film, an excellent and confident addition to the genre.