‘Knight of Cups’: Malick brings the wonder to tale of L.A. debauchery and banal excess 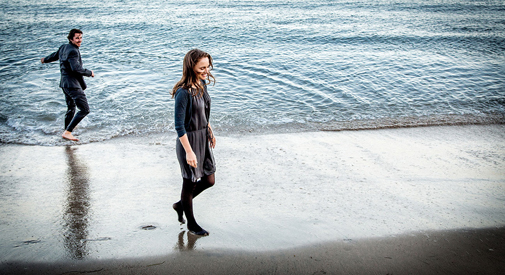 ‘Knight of Cups’: Malick brings the wonder to tale of L.A. debauchery and banal excess

We once had only a glimmer of the haunting, transcendent etherealness of Terrence Malick. His true-crime debut “Badlands” back in 1973, while stunning to behold and brilliantly composed, didn’t employ those dreamy voiceovers or lingering portraits of nature we’ve come to expect from the famously reclusive director. It wasn’t until “Days of Heaven” in 1978 that Malick started to experiment and form those now revered filaments of filmmaking. Then, as Malick laid out his next few projects (one of great personal passion called “Q” concerned the origins of the universe and humans’ place in it and would ultimately become “The Tree of Life”), he ran into conflict with the studio and settled into a self-imposed hiatus (in Paris) for 20 years before returning to the screen with “The Thin Red Line,” the auteur’s contemplation on man and war based on James Jones’ account of the U.S. campaign in the South Pacific during World War II. 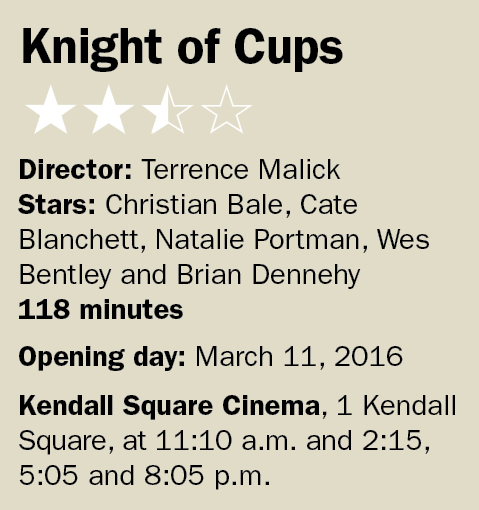 Since then Malick has released four movies, all imbued artfully with discovery and revelation. The first two, “The New World” and his arguable magnum opus “The Tree of Life,” take place in unique temporal settings and deal with larger cultural and philosophical themes. His latest and 2012’s “To the Wonder” are rooted in the inward and, as a result, don’t resonate with the deep, provocative soulfulness of the prior works. “Knight of Cups” begins with the late Sir John Gielgud reciting “The Pilgrim’s Progress” and heavenly imagery of the aurora borealis before we settle in on a distant-looking Christian Bale rooted in the glitzy concrete jungle of Los Angeles as the venerable Brian Dennehy voices over the titular tale of a knight who, on a quest, succumbs to a sleep potion. This makes sense, as Bale’s Rick is a screenwriter on the cusp of his biggest payday, though he’s in a creative funk and spends most of his days dallying with one lithesome body (or bodies) after the next. The title too is a reference to the tarot card that, right side up, connotes the bringer of ideas (hey, that must be the screenwriter), but when upside down (as the movie’s poster shows Bale) implies false promises and chicanery. But who is fooling who?

With so much at his feet, Rick’s not a settled man. He’s searching, for what we don’t exactly know as he descends into strip clubs and casinos to work it out. It’s a pretty thin and decadent existence, though in flashback we learn that Rick was married to a smart, unpretentious doctor (Cate Blanchett) who tends to hardship cases from the inner city. Their marriage is doomed just by the topography of their clientele. Then we bump into Rick’s brother (Wes Bentley, who never seems to age) full of spit and their dad (Dennehy) pushing the blame back and forth for the demise of a third brother. This is about as close as the film gets to registering a palpable human heart. There’s also the dilemma with a married woman (Natalie Portman) who becomes pregnant and unsure who the father is. From the two you get a sincere sense of yearning and a glimmer of happiness, but so brief and ephemeral that it’s gone before we can take root in the emotional complexity of it.

If the banality of excess is the film’s point, it’s not pointed enough. Malick almost puts a gauzy halo around Rick’s ennui, and there’s only above-average females in his wheelhouse – and of courses there’s plenty of the religious imagery and motifs Malick’s been mixing in more and more in his recent works. Nonetheless, “Knight of Cups” delivers on all things Malick. The cinematography by Emmanuel Lubezki, who’s shot Malick’s past four projects and just picked up his third Oscar, opulently embosses the sterile vacuum of high living in L.A. One of the film’s most gratifying sequences has a dog underwater in a pool trying to retrieve an eerily elusive tennis ball. You half expect “Scarborough Fair” to queue up on the soundtrack.

What ultimately elevates “Knight of Cups” above the similarly slight and indulgent “To the Wonder” are the performances. “Wonder” left too much to Ben Affleck, an actor not known for physical emoting – something Malick’s films require of their protagonists, who remain largely silent in the present action while other players provide voiceovers explaining in teasing, arcane wisps the backstory and dilemma du jour. Bale, so quirky and masterful in films such as “The Fighter” and “The Big Short,” gets it, and he’s blessed with a talented ensemble to bounce off of (the cast list includes everyone from Fabio to Antonio Banderas). His Rick is far less appealing than Affleck’s homeboy, but “Knight of Cups” is the film that bares greater wonderment – and it’s still subpar on the Malick meter.

Given Malick’s slow, careful procession of masterworks over the decades, one can only hope the celerity of his recent output resets to the pace of a pilgrim’s progress.