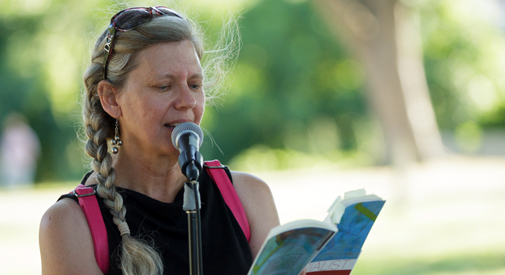 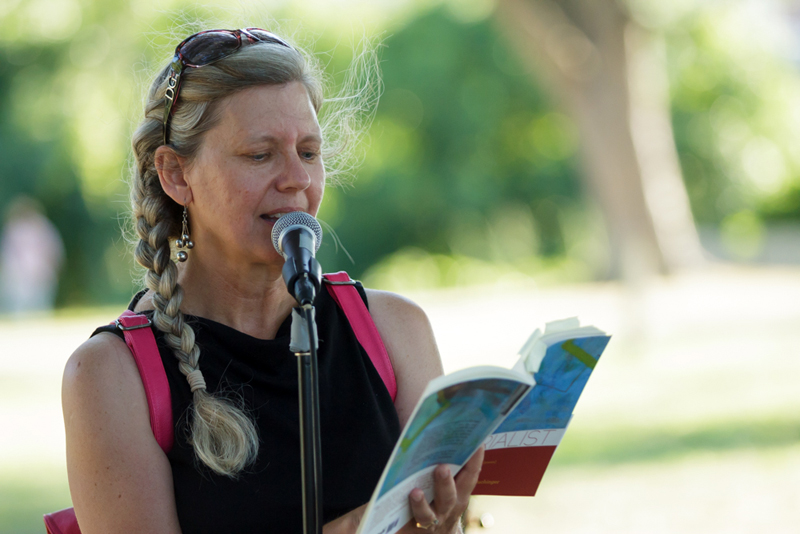 Mary Buchinger is the spring poetry ambassador for Cambridge.

In addition to using April – which is National Poetry Month – to judge entries in the second city Sidewalk Poetry Contest, the Cambridge Arts Council is celebrating by hosting its first community open mic April 11.

Residents are invited to claim three-minute slots for the evening event, which is planned for the council’s Gallery 344. Poets will perform surrounded by the latest art exhibition works of Lisa Houck, called “A Long Walk with No Destination” (and described by the council as Houck’s “vibrant visual poetry”).

The city’s third major poetry push of the year is the work of its poetry ambassadors, said Molly Akin, director of marketing and public relations for the council. Each gets a three-month term to be used to engage with the community on the art of poetry. The ambassador program is also in its first year, kicked off by former Poet Populist Toni Bee on Dec. 10 with a reading at the Central Square Library on the theme of parenthood.

Next up is Mary Buchinger, an associate professor of English and communication studies and author of two books (including last year’s “Aerialist,” shortlisted for three prizes) who has been anthologized and published in a wide array of collections and journals. The summer ambassador is Nadia Colburn, a Harvard grad who has taught literature and creative writing at MIT and Lesley University, among other places, and been published in The New Yorker, The Boston Globe Magazine and other periodicals while running a local reading series and Continuities: Readings and Discussions, which paired local poets with activists. The fall ambassador is Jade Sylvan, an author, poet, screenwriter, producer, and performing artist whose current focus is the production of her original, full-length musical, “Spider Cult the Musical,” premiering June 24 at Oberon in Harvard Square.

Each is organizing community events for their term: a poetry-jazz collaboration at Cambridge Rindge and Latin School; an exploration of attention and awareness in verse; and a program giving voice to LGBTQIA poets.

As to the Sidewalk Poetry Contest, not only will selected poems be imprinted in a freshly poured city sidewalk this fall; their authors will also be invited to read at the Cambridge Arts Open Studios to be held May 14-15 and in the poetry tent at the River Festival being held June 4.