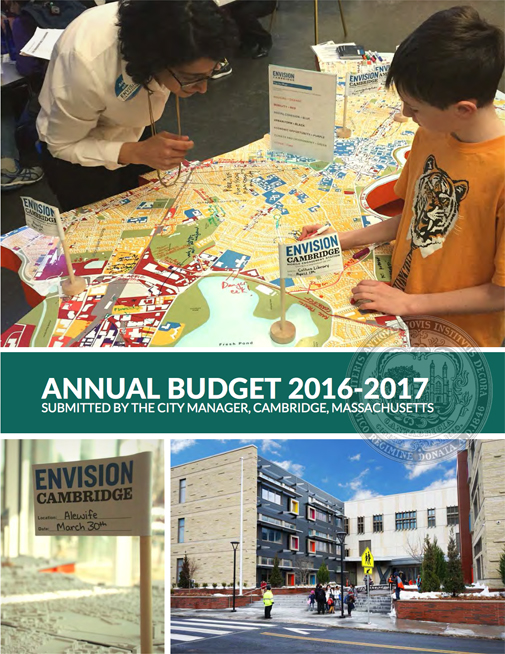 Click on the above image to read the city’s proposed budget for the 2017 fiscal year. It is available as a searchable PDF that can be read in or exported from a browser window.

A massive municipal budget of $574.6 million is projected for the coming fiscal year, 4.8 percent and $26.3 million bigger than the current adopted budget, and it comes with an expected bump of 6.2 percent in property tax, meaning city property owners will be expected to collectively pay $22 million to pay for city hiring and services.

But continuing a Cambridge tradition, homeowners will feel little of that, officials said Monday at the unveiling of a proposed budget to be discussed in the coming month.

“We have been able to … really minimize the property tax increase on our residents, which really helps people who’ve lived in the city for a long time who own homes now worth more than many of us ever thought homes would be worth,” said Marc McGovern, the chairman of the City Council’s Finance Committee. “By keeping property taxes low, they’re not paying huge amounts on those much higher assessments. It allows them to stay in our city.”

A tax rate comparison of what homeowners pay for each $1,000 their property is worth in the current year shows Cambridge at $6.99 with a residential exemption for owner-occupied homes, while nearby communities are significantly higher – $12.53 in Somerville, $12.80 in Arlington, $13.68 in Watertown and $11 in Boston, for instance.

“Our sound financial practices have left the city with substantial reserves,” including $192.7 million in free cash, the budget book says.

In addition, property tax increases should be even smaller in the four years that follow, starting with the fiscal 2018 budget, according to the proposed budget crafted by a team led by Louie Depasquale, the city’s finance director.

Schools and other costs

The public schools budget is estimated to rise 6.9 percent, to $172.8 million, which is 30 percent of the total budget.

With a two-school campus completed for $95.5 million but two more such projects slotted into the city’s five-year plan, educational expenses loom large in the budget and the city’s debt picture. (The King Open and Cambridge Street Upper Schools & Community Complex is expected to cost about $159.1 million.) But there are other costly priorities on the way, including municipal building expansion and investment in affordable housing, and they arrive as Rossi leaves, retiring after 45 years working with the city and overseeing work on every major project the city has done.

Set for the future

But Rossi told councillors he had used his three-year term as city manager, after decades as deputy city manager, ensuring that each department had good leadership in place.

“We’re strong and we should remain strong,” Rossi said. “This is a plan which benefits our entire community and we need to stick to it. If we stick to it, I tell you that I think this community can continue to be successful for a long time.”

Tim Toomey made an appearance as a city councillor long enough to mention that budget discussions had also begun in his dual role as state representative – and that the disparity between Cambridge’s growth and Massachusetts’ fiscal worries was striking.

In addition to building structures and finding money for growing services, the city plans to add 21 full-time positions in the budget, including a four-person street cleaning crew that will start work cleaning squares in the early morning and five positions in Public Safety.

The budget will be examined before its June 6 adoption deadline in a series of May hearings open to the public. There will be 9 a.m. meetings May 5 and May 12 on the city side and at 6 p.m. May 10 for the schools budget. All are to be held at City Hall and televised.

There will be a 9 a.m. May 17 hearing added if necessary, McGovern said. The council plans a budget adoption vote for its regular May 23 meeting.

The entire proposed budget is available here as a searchable PDF that can be read in or exported from a browser window.