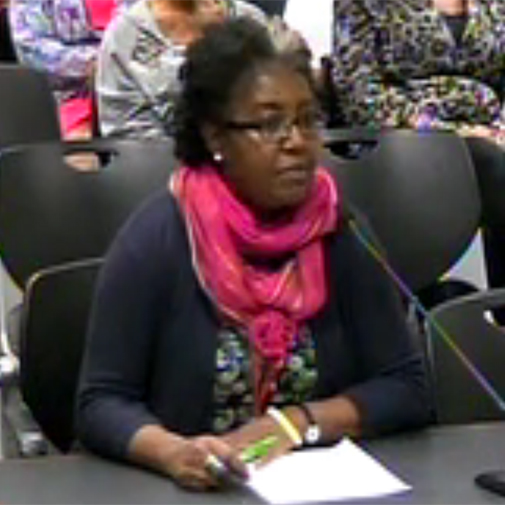 CRLS English teacher Wambui Githiora-Updike reminded the School Committee on Tuesday that “there is not a single black man” on the school’s core class faculty.

Several Cambridge Rindge and Latin School teachers, with backup from students, appealed to the School Committee to improve hiring and retention of teachers of color during public comment at a meeting Tuesday.

“At present, a student can take all core classes and not have a single teacher of color,” high school teacher Archy LaSalle said.

“There is not a single black man on the core faculty,” added English teacher Wambui Githiora-Updike, referring to the required academic subjects known as core classes. She also cited “a lack of administrative support to confront systemic problems of race and microaggressions” as a critical factor in hampering retention of teachers of color.

“Not only should students feel a strong connection to their teachers” by having a more diverse staff, student Kavya Crasta said, “but also it can open up conversations about race that can be relevant to outside events.”

The teachers read from a memo highlighting the importance of a diverse faculty and including “demands” to improve recruitment and retention. They also offered personal comments.

Guidance counselor Lorraine Davis talked about the importance of having role models among her teachers while growing up as a Cuban American in Miami. “I was one of the few Cuban Americans in my elementary school at that time, and it was really important to me to see that there were people just like me in positions of power.”

Teachers stressed not only the importance to nonwhite students of having teachers who “looked like them” and shared a background – including religion, ethnicity and culture – but also the importance of diversity to white students to better prepare them to be “global citizens.”

Teachers and students also raised the oft-discussed issue that in the high school, the student body is largely segregated, with most of the white students in the advanced placement and honors classes and most nonwhite students in the misnamed, less-demanding “college prep” classes. Mayor E. Denise Simmons is among those who have noted that CP classes are often better known as “colored people” classes. 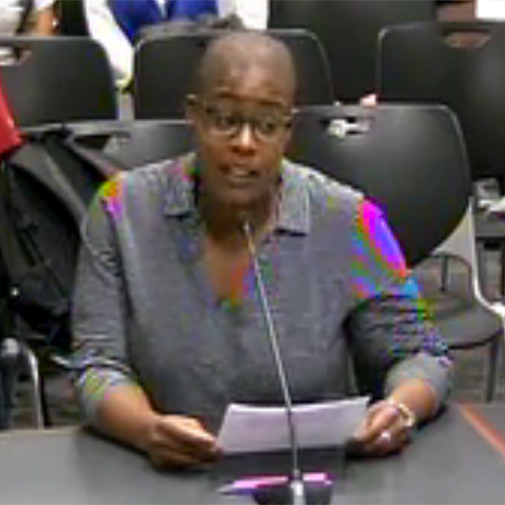 English teacher Kim Parker said she has been scolded by her evaluator for raising questions about racial inequity at CRLS.

The demands include bringing the percentage of faculty of color – not including administration – up to 30 percent; always including at least two staff of color on hiring committees; ensuring districtwide cultural proficiency training; and launching a Lawyers’ Committee on Civil Rights and Economic Justice review of teacher evaluations, which they said often penalize teachers for raising questions of equity for students and staff. “This year I have been scolded by my evaluator for raising questions about racial inequity,” English teacher Kim Parker said, “being called ‘divisive’ and creating low morale.”

In the district’s most recent update on affirmative action in June, Human Resources Director Barbara Allen and Affirmative Action Officer Kahris McLaughlin reaffirmed a goal of reaching at least 30 percent for teachers of color. They reported October 2014 data that indicated the level was 22 percent – a district average across all schools and many staff categories. Broken down by staff category, 19 percent of classroom teachers are of color; for assistant principals and deans, the figure is 58 percent.

Even at 22 percent, Cambridge has the second-most diverse staff of the state’s 351 state districts, behind the Boston Public Schools, which report 45 percent nonwhite staff.

During that presentation to the committee, Allen and McLaughlin reported that Boston has an active recruitment program – which they attributed in part to the fact that Boston is able to bring on a pool of teachers early in the hiring process they can later disperse to schools. In addition, they pointed to an attractive recruitment tool: a Boston’s residency teachers program that supports teachers’ pursuing master’s degrees.

They also announced that educators were resurrecting a dormant Teachers of Color affinity group in Cambridge. The teachers who appeared Tuesday are part of the group.

The issue of staff diversity was not on the committee agenda. Simmons interrupted LaSalle, the first speaker, to allow member Fred Fantini to ask for suspension of rules to allow public comment on a non-agenda item. 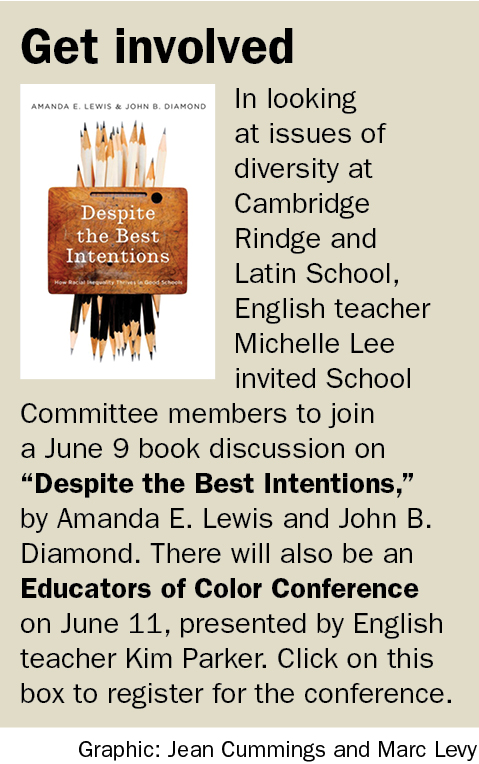 While clearly interested in the issue, Simmons made it clear to the speakers that it would be preferable for them to have asked for the topic to be on the agenda. “I appreciate that you came forward,” she told the group, “but you need to get things on the agenda. Then the entire community knows it’s on the agenda so that others in the community have an opportunity to speak to the issue.”

Not being on the agenda, she said, also meant that the committee would not be addressing the issue at that meeting. After public comment, Simmons again asked for a suspension of rules to explain to the group that they should not wait around expecting committee discussion. She also explained – for the third time – the rule limiting public commenters to three minutes each, following a student’s objection to “showing disrespect by cutting [the teachers] off.” The rules for committee presentation and comment are posted on the its website.

“I don’t know who ill-advised them about how to come forward,” Simmons said later in the meeting.

Asked later about the timing of the public comments, Parker wrote Cambridge Day that “in the last month, we had lost the opportunity to hire a black male for core faculty and the English Language Learners Department hired new teachers, all of whom were white and none of whom are Haitian-Creole speakers” although, she said, Haitian-Creole speakers make up the largest percentage of the English Language Learners program, which hired three teachers.

“We have been meeting as an affinity group since the fall,” Parker said. “The group knew it was time to make our concerns public, and a School Committee meeting was where we knew we would be able to talk to as many decision-makers as possible.”

The upshot of the unscheduled public comment, though, was a commitment to schedule a roundtable discussion on the issue, initially proposed by CRLS student committee member Ben Austin. He and fellow student committee member Griffin Andres, white seniors who have been in Cambridge Public Schools their entire school career, offered strong support to the issues presented by the teachers. “I wish I could talk about some great experiences I’ve had with teachers of color,” Austin said, “but unfortunately I can’t” – at the high school his core teachers were white, with the exception of two Asian teachers.

Austin and Andres supported student Emmanuela Fede’s statement that the issue needs to addressed in the lower grades as well. Simmons commended Austin for his proposal to put aside time for a broader community discussion on the issue, and promised to propose it to the Teachers of Color group. “I will say it is on your recommendation,” Simmons said.