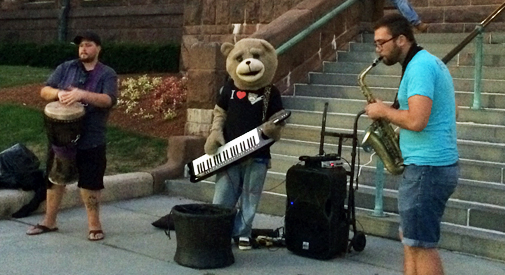 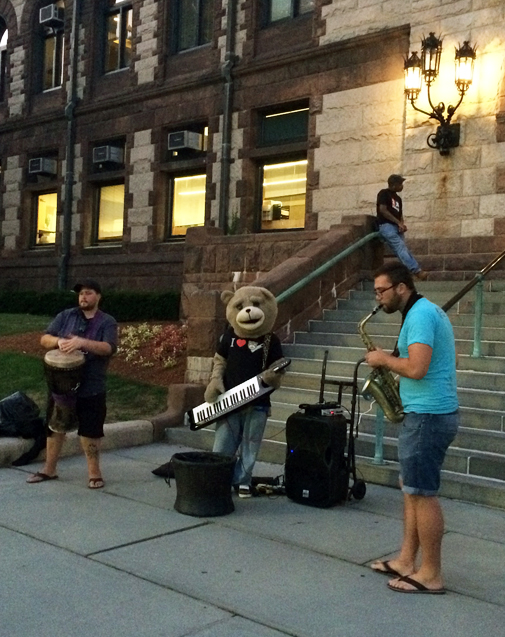 The loss of artists in Cambridge has reached a crisis point, say city councillors trying to grant resident artists a one-point advantage in the formula to apply for rentals in lower-income inclusionary housing.

“We’ve gone from being literally a world mecca for artists to not even being on the map. That’s a thing that’s happened in the past 20 years,” Nadeem Mazen said, explaining the proposal made with Leland Cheung to fellow city councillors at a Monday meeting. As real estate prices have surged for living and working space, he said, “this group is struggling and has no support network at all.”

This is not Mazen’s only effort to find ways to help local artists. He is hosting an Arts Panel & Mixer on June 2 at his maker-based business danger!Awesome Underground in Central Square, with city and state officials and members of the Cambridge and Somerville arts community aiming to exchange ways to keep a vibrant creative economy in place. Ideas from the event could be brought forward to the council’s Neighborhood & Long Term Planning, Public Facilities, Arts & Celebration committee, which he leads, and then to the full council.

The housing initiative, however, went nowhere Monday as Mayor E. Denise Simmons used her “charter right” to delay a vote until the next council meeting – and with Memorial Day being celebrated in the coming week, that’s not until June 6.

“We are right at the beginning of a very long, very thoughtful process of looking at inclusionary zoning,” Simmons said, referring to a discussion for which the next step is a May 31 committee meeting about a recently completed Inclusionary Housing Study. “What happens if this [artist policy order] passes? It says the city manager should take this up … does it take precedence over the inclusionary zoning discussion? I should think not.”

Even before Simmons blocked immediate action on the proposal, vice mayor Marc McGovern had asked to substitute discussion in committee for what Mazen and Cheung wanted – for the city manager and Cambridge Arts Council to create a process to award artist certification to full-time and career artists and prioritize slightly their placement in inclusionary housing. “There are no shortage of occupations who have been priced out of the city,” McGovern said, stressing that his comments were not to be taken as a lack of support for artists, their work and their presence in the city. “Let’s have a conversation, [because] I’m not going to pit one needy group against another.”

“I’ve been here a long time, and I remember when there were teachers and firefighters living on my street, and when there were community activists who could afford to live here,” McGovern said. “Those things are gone too … you could insert 50 different occupations instead of ‘artists’ there. There’s no shortage of occupations that are being priced out of the city, and I have a really hard time prioritizing one over another without having a much larger conversation.”

Taking this approach specifically for artists meant a policy order might be introduced next time giving people in some other occupation a point in the inclusionary housing formula, McGovern said.

Mazen said he respected the substitute motion, and he acknowledged Simmons’ point about the city’s larger look at inclusionary zoning and selection criteria, which she called “clearly on the agenda” of the Community Development Department.

But Mazen and some other councillors saw reason to make the city’s artists something of a protected class, despite similarly compelling need on the part of other professions whose pay hadn’t kept up with exploding rental or homeownership costs.

Firefighters and teachers were at least represented by unions, Jan Devereux noted, but artists had no such protections or reliance on cost-of-living increases. Dennis Carlone carried on a theme raised by Mazen, that once a city loses its artists, the “quality of life does change dramatically.”

There was a need to act fast, before the factors that support artists in the community were gone entirely along with affordable housing, Mazen said, and Carlone and councillor Craig Kelley agreed that some hope lay in changing zoning to allow for parts of private homes to be used as studios or live/work space for artists. While hardly as useful as the massive, repurposed industrial spaces still found in communities such as Lowell, renting out space over a garage could help the “overhoused” elderly who need to pay property taxes as much as it could benefit an artist. “We need to rethink how we use space,” Kelley said.

The debate was uncontentious, although Mazen stressed the need for urgency.

“We’re woefully behind in this city in protecting artists as a special group,” said Mazen, who recalled coming into the city as a high schooler to attend gallery shows of world-famous artists and enjoying lively squares filled with buskers – and who held a Sept. 1 committee meeting addressing the dwindling of musicians on city streets.

“We need to get that dynamic fervor back … this is just one simple way to do that. I think we should do something like this quickly and look at a comprehensive arts package. And then I think we should look at other groups that are in need – not because there’s one group of people who are more in need than another, but just because it’s been longer that artists haven’t gotten any support on this level than other groups.”