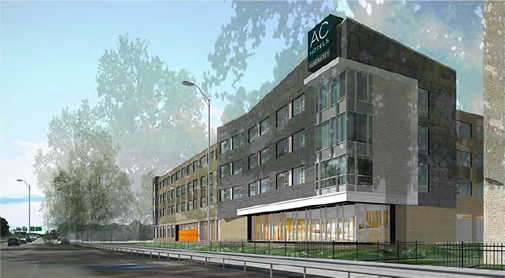 A rendering shows the AC Hotel under construction along Route 2 in the Alewife area.

A “hip and trendy” 150-room hotel and restaurant is coming to the fast-growing Alewife area, with plans to open its doors in September.

AC Hotels, a midrange Marriott brand out of Spain with only seven locations in the United States, was given an inn-holder’s license Tuesday by the License Commission to begin occupancy once construction is complete. Work is underway at 10 Acorn Park Drive on the old Arthur D. Little site, now known as Discovery Park under development by the Needham-based Bulfinch Cos.

The hotel concept was welcomed when it appeared before the Planning Board in September 2014, and in representing the project to commissioners, attorney James Rafferty said it would be a benefit not only to business travelers and tourists, but for people who have moved into the large, fancy apartment complexes along Route 2 and need more dining options. the hotel comes with a restaurant serving from breakfast to 1 a.m.

In the simple menu presented Tuesday, the restaurant serves small plates for $8 or less, including a grilled trio of sausages served with flatbread, caramelized onions and Dijon mustard for $7 and a $6.50 Pollo Maroqui – a chicken casserole with Moroccan spices, mango and raisins served with Israeli couscous.

“This is a hip and trendy hotel,” Rafferty said, “and it’s going to appeal to a range of travelers.”

The plans show a four-story hotel with 150 guest rooms and a first-floor area with the restaurant, lounge and bar, and business area, including two boardrooms and a meeting room. There is an outdoor function terrace and bar terrace. 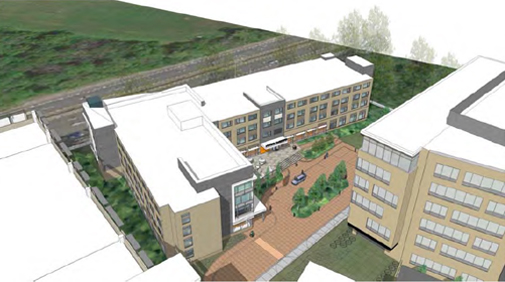 A rendering of the AC Hotel due to open in September shows its courtyard side with a small terrace.

The company bringing AC Hotel to Cambridge is Colwyn, which opened the Fairfield Inn by Marriott on Monsignor O’Brien Highway in March 2015. After the opening in Alewife, the company plans to place an AC Hotel in Boston’s Ink Block, the former home of the Boston Herald newspaper.

“We’re pleased that once again Cambridge will have something before the city of Boston has it. People come here first, and Boston tends to follow,” Rafferty joked.

But Cambridge’s AC Hotel is preceded by one run by Colwyn in Medford. While not everyone is impressed, a wide majority of TripAdvisor reviews of the Medford site give it five stars, with those customers calling it a “gorgeous contemporary hotel [with a] clean, simplistic look” and crediting Colwyn’s management with savvy, friendly service. “I predict great success for this addition to the Marriott family,” one reviewer said. “We will be on the lookout for AC hotels in the states and when we travel in Europe.”

Room rates range from $136 to $469 a night, depending on dates and occupancy, at the Medford location.