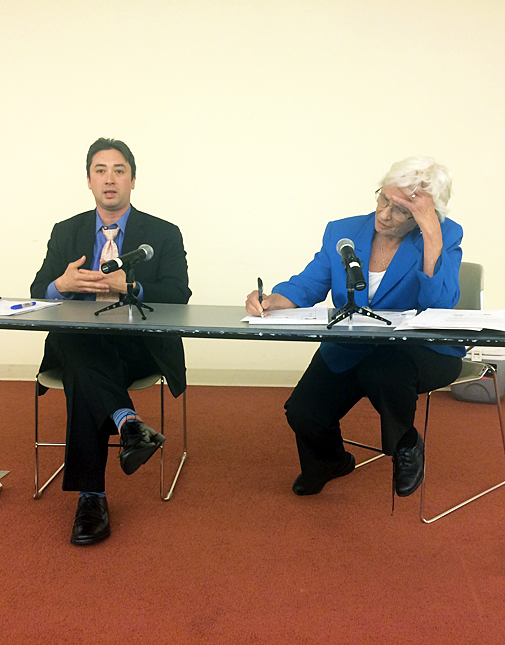 A largely easygoing, policy-focused forum between incumbent Pat Jehlen and the challenger for her state Senate seat, Leland Cheung, became a spirited debate when the issue of charter schools was raised – bringing the only direct back-and-forth of the two-hour event held Wednesday in Porter Square.

Somerville’s Jehlen has been senator since 2005, but Cheung, a fourth-term city councillor in Cambridge, opted to bid for her seat in the Second Middlesex Senate District – which includes Somerville and Medford and parts of Cambridge and Winchester – in a state primary Sept. 8.

Charter schools came up in the second hour of the debate, which was moderated by Robert Winters of the Cambridge Civic Journal website, but Jehlen came primed to respond to an answer Cheung gave in a May interview saying Jehlen “voted to increase the charter school cap” – allowing more institutions into the state that drain money from local budgets as well as students and resources from public schools. The question will appear on the November ballot to be voted on statewide.

“The ballot question will be a tremendous disaster for the state and especially for Cambridge, because you spend a lot of money,” said Jehlen, who dislikes the state’s approach of looking only at the quality of applications without considering the effect a charter school’s arrival would have on a community, and that approvals are done by “bureaucrats in Malden” with no local control. “They are unaccountable,” she said of decision-makers at the state’s Department of Elementary and Secondary Education.

Cheung, as in May, declined to say clearly how he would vote on the issue; when a City Council vote on supporting a cap had come up the previous month, he was out of the room. His answer Wednesday was again that he didn’t “like talking about charter schools, because I think it distracts from the real issue of education reform and are we adequately funding our schools …  I don’t want to play politics with our kids’ future. The focus on charter schools is a distraction” considering the differences in quality from one school district to the next. “The Legislature has pulled off an incredible con and have us pointing fingers at each other. They’re creating this conflict between charter schools and public schools,” Cheung said, “when really I think all we should be caring about is the kids.”

He drew mutters from the crowd – a few dozen people, many already in one camp or the other – when saying “I don’t want to have to vote for the initiative in November … this question can’t really be reduced to a yes-or-no question. That’s the kind of black-or-white thinking that results in political gridlock.”

An audience member riposted quietly, “But that’s what’s on the ballot,” bringing laughter.

In reminding the audience that charter schools wouldn’t be necessary if public schools did a better job, Cheung said he and his wife had graduated from public schools and were sending their daughter to public schools as well. “I know Sen. Jehlen made a different choice,” Cheung said. “I don’t begrudge her or anybody that choice. What I do begrudge is taking away the choices of other parents.”

Winters nearly moved on to another topic, but Jehlen – her persistent smile gone – demanded time to respond.

“I find it frustrating because Leland says things about me that are not quite true,” she said. “I do believe in choice.”

It was the quality of Somerville schooling decades ago, which she recalled as focused on having students sit neatly in rows to fill out worksheets, that convinced her and her husband to send her first two children to parochial schools with more developmental programs. “But I used that whole time organizing with other parents and running for school committee to create the first school of choice in Somerville, which grew and grew and influenced other classrooms in Somerville to become more student centered and family oriented,” she said. “That’s why I voted for charter schools in the first place. I hoped that was what was going to happen.”

Unfortunately, she said, charter schools have taken a different, disappointing path of copying each other rather than innovating; hiring low-paid, inexperienced teachers; tying education to rigid formulas and tests; and falling into lockstep as “no-excuses schools” where students with the wrong color of socks get sent home or given a demerit. “I like innovation. I want innovation. That is not what is happening,” Jehlen said.

The vote she took in the Senate was on a bill that tied a rising number of charter schools to a proportionate rise in funding for public schools, which seemed to be what Cheung wanted, she said. She homed in as well on Cheung’s words on the upcoming statewide vote.

“It is on the ballot, and we have to make a decision. You should be for it or against it – I am against it. You have refused to take a position on it,” Jehlen said.

Cheung clarified: He’d rather not have to vote on the cap in November, “but that’s the choice the Senate gave us by failing to give us a compromise that would have kept it off the ballot … just pointing at charter schools is shifting the discussion onto the process, and we’re not thinking about giving every kid a great education no matter where they’re going. And we’re not talking about equitable funding when we’re talking about charter schools; we’re not talking about doing education reform. Those are all the things that are left on the table when we shift this debate and focus only on that.”

He also rejected Jehlen’s blanket criticism of charter schools, saying he knew of some where students and parents were pleased by the experience, “and I don’t feel comfortable taking away somebody else’s choice that I have been blessed to have.”