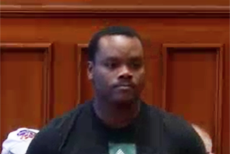 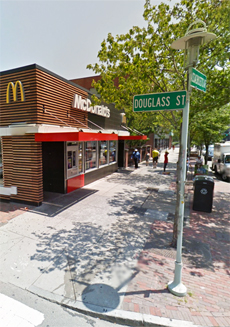 Workers from the Central Square McDonald’s were to speak Monday to city councillors about a living wage, but some were too busy working to come in. (Photo: Google)

Work to break free of the state’s hourly minimum wage of $10 and raise rates for workers in Cambridge began Monday, as the City Council voted unanimously to form a task force to determine what the rate should be and how to implement it “without creating unintended consequences in Cambridge or elsewhere.”

The task force – to be made up of equal numbers of business, labor and community representatives – will move quickly for a municipal body: It’s been ordered to hold its first meeting within three months and report back to the council within six.

The most likely finding by the task force is that a home rule petition will have to be filed with the state Legislature for the right to raise wages in Cambridge, just one of the 351 cities and towns in Massachusetts, and that is a slow and costly process. Cambridge has an ally, however, in Boston, which is also seeking to raise its minimum wage, and beginning its process with a task force.

“This may not happen tomorrow – because I think that’s the expectation, that by July we’ll have income equality. It’s important for us to be realistic and know we’re moving as fast as we can, but  we’re somewhat encumbered with due process,” said Mayor E. Denise Simmons, who is the first name among councillors ordering the task force and officially its convener; most policy orders ask action of the city manager.

A years-long, nationwide effort called the Fight for $15 advocates for an hourly minimum wage of $15, with an emphasis on large fast food chains such as McDonald’s. But others have pegged wages to the same figure. Two years ago, the 1199SEIU United Healthcare Workers East won a $15 minimum wage for lower-paid service and clerical workers at Cambridge Health Alliance’s Whidden Memorial Hospital in Everett, calling it a victory in the larger campaign. Cambridge’s pays a living wage of $15.04 per hour to municipal employees and people who work indirectly for the city through vendor contracts.

Stratospheric real estate prices and the overall cost of living might make $15 barely helpful here, though. “It’s getting to the point where I’ve watched every family I grew up with leave the city due to not being able to afford it,” the council was told by Christopher Correia, a lifelong resident and carpenters union member who called it hard to afford Cambridge even on his higher union wages. “Hopefully you can get it to more than $15, because at $10 now it’s impossible.”

It was a point made by councillors as well, but the most eloquent discussion of the realities of living on around $10 an hour was from those doing it, including workers from the Central Square branch of McDonald’s. 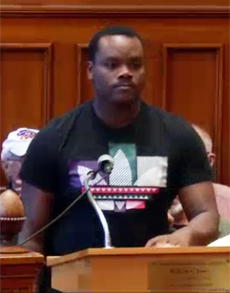 Darius Cefus said he had aspirations for higher-paid trade work upon graduating from high school, but when his mother had a stroke, he was forced to do what he could to provide for the family immediately. “I need to keep the lights on, put food on the table, pay rent,” he said. “McDonald’s was the only place I could find a job.” He started at $8 an hour three years ago in a different town, then seized the chance to work in Cambridge because it paid a dollar more than the state minimum wage – but now spends between an hour and an hour and half traveling to work five days a week. “The extra dollar helps, but it’s just not enough. I share an apartment with my fiancée and her family because our income combined, we are still unable to afford high rents across the state, including here in Cambridge.”

Other McDonald’s workers were expected to come forward to testify, but couldn’t get away, labor organizers said. One worked three jobs to support three children.

Speakers said the time had long since passed when being willing to work hard 40 hours a week meant surviving in America with dignity. “Something is tragically wrong in this country,” said Neil Rohr, also urging a wage rise to more than $15 an hour.

Several businesses in Cambridge have been able to raise their worker wages by very slightly raising costs to customers, councillor Nadeem Mazen said, with even some of the most skeptical seeing “incredible results [that include] a much more dialed-in and humanely considered staff.”

Because of this, the city might have a justifiable path to raising wages through business permitting, even if a home rule petition fails in the State House, Mazen said.