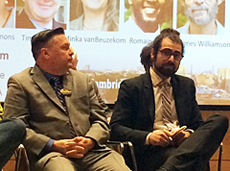 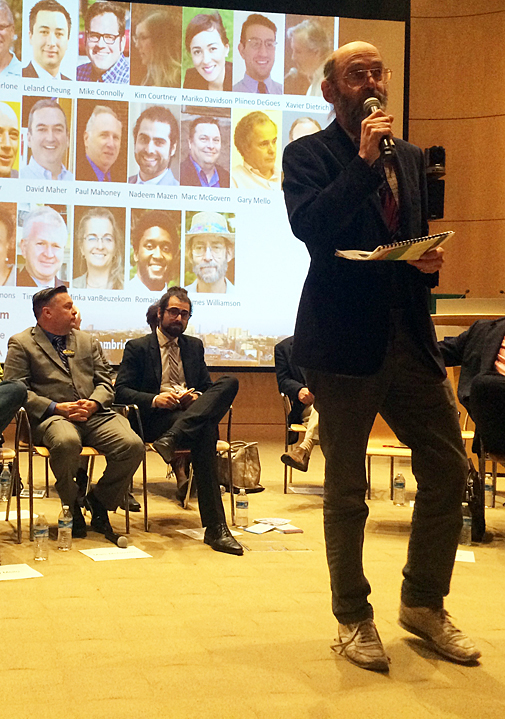 Campaign donations from real estate developers were a topic for debate during the 2015 election season. (Photo: Marc Levy)

City councillors agreed to explore publicly funded “clean elections” in a Monday vote, a potential step toward ending the ugliness of recent municipal election seasons and a cause for division and suspicion among residents and officials.

The council agreed to send the idea to a joint committee meeting in the coming months, spending only a few minutes talking over the wording – a stark contrast to the opposition that met a similar order in February 2015 that sought to send the topic to the city manager for exploration.

With that change, even the loudest voices opposing the idea a year ago were willing to explore the idea of full public financing of elections that could lower the cost of running for office, reduce time spent fundraising and, in an element that went unmentioned in public Monday, possibly decrease fears of special access for developers of large real estate projects that have roiled city politics for years.

At least $651,663 was spent in the City Council race in November, an increase of about 20 percent from the previous election year, despite there being fewer candidates running and a few who made a point of spending no money to seek office. While the average amount spent per vote rose by 14.6 percent, to $38.81 from $33.88, the number of voters dropped from 2013.

Campaign donations from developers to a “Unity Slate” of seven incumbents was an issue for some residents; financial support for their challengers from the Cambridge Residents Alliance, a group considered by many to be anti-development, was met with suspicion in other camps.

“I think everyone heard from residents that money was an issue,” said councillor Dennis Carlone, who proposed both years’ policy orders with councillor Nadeem Mazen, when asked Tuesday what had changed from year to year in tackling the issue of campaign donations. “Although it’s not big money in Cambridge, there’s a perception of outsize influence, [and] I think there’s a more general mood against that.”

Benefits to the public

This year’s order was joined by first-year councillor Jan Devereux and one incumbent who had been on the Unity Slate: Leland Cheung, who said last year that he was “philosophically” in favor of publicly financed elections but joined the four-person majority opposing the original order, saying it would bog down the city manager with unnecessary work and seemed to make accusations of corruption that hadn’t been borne out by any behavior by elected officials he’d seen in Cambridge. (Residents who watch campaign donations cite examples of developers who give money to council candidates when they have projects pending before them, but are conspicuously absent from donation lists in the next election cycle, after their projects’ fate is decided.)

The drafters of the original motion reached out to Cheung to co-sponsor Monday’s order, but their “first draft had the same problem as last year’s,” he said. “The issue last year was that in the ‘whereases’ there was an assumption of guilt among elected officials, which I have not seen … I worked with them to rewrite it to focus on the benefits to the public and for officials who don’t want to spend their time fundraising.”

The Monday vote is only for discussion among the council committees – specifically those of Neighborhood and Long Term Planning, Public Facilities, Arts and Celebration; and Government Operations, Rules and Claims – about which models for campaign finance reform and publicly funded municipal elections might work in Cambridge. It notes that Massachusetts experimented with clean elections after voters approved the idea by a wide margin in 1998, and that 77 percent of Cantabrigians were in favor as well. But an amendment to the state’s budget in 2002 eliminated funding for the initiative, which “effectively repealed” it.

There are no details or dollar amounts attached in the order, and councillor Craig Kelley doubted the models it cited from New York or New Mexico would work locally.

Kelley’s willingness to talk over the issues in committee weren’t so different from his position last year, he said. “I said I’m happy to have a talk about it,” Kelly recalled, noting that the new order “doesn’t give anything to the city manager. I’m good with council committees having a talk – [but] I don’t think there’s a need for it.”

That was more forcefully expressed in 2015, when he said: “Of all the things we have to worry about, publicly funded elections isn’t one of them. I failed at the committee to understand what problem this was going to solve that we have in Cambridge.”

“There may be places where clean elections will make the government better,” Kelley said last year. “This is basically a distraction from things we could do.”

Councillor Tim Toomey was even more outspoken in his disdain for the 2015 order. “To play into this, that we have to do this because of the perception that elected officials are beholden to special interests, I just don’t buy that, I really don’t. I’m just so sick of listening to that, and I’m not going to respond to that,” Toomey said at the time.

Asked Tuesday about what softened his position from year to year, he answered only indirectly: “I am looking forward to an open and productive dialogue about whether or not publicly funded campaigns are something that we should be pursuing and what the timeline should be for something like this. I am in the process of developing my ideas on the issue and anticipate a process where we will hear from many residents with a variety of viewpoints.”

Vice Mayor Marc McGovern said last year that he believed accusations by some residents of councillors responding to special interests bordered on slander, and that, like Cheung, he had never seen corruption in Cambridge in several years of serving as an elected official. But he voted in favor of the order last year, and affirmed his support in a voice vote Monday.