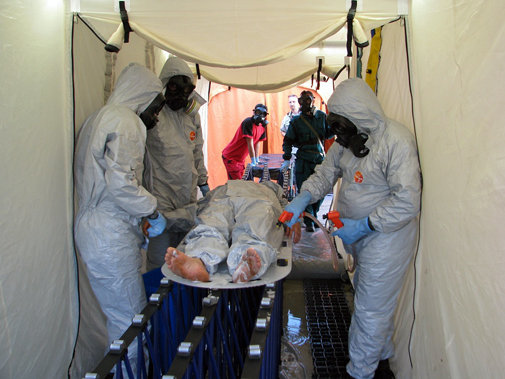 City adds to preparations in case of chemical, biological incident
By Marc Levy

Cambridge is getting two mass decontamination unit tents paid for by a grant from the state Department of Public Health. (Photo: Gumotex)

Two “mass decontamination unit” tents are being added to the city’s supply of tools stored away in case of disasters, disease outbreaks and attacks.

The 60-foot tents, equipped with conveyor belts, are meant to be set up outside Cambridge Hospital and Mount Auburn Hospital to intercept and decontaminate citizens before they enter an emergency room. “Hopefully at the other end of the tent they come out decontaminated and they’re able to go in,” fire chief Gerald Reardon told city councillors Monday. The tents can handle “multiple threats. It could be chemical, it could be biological, it could be exposure to an airborne product.”

The so-called MDUs are cheap – $2,000 each – and paid for with a grant from the state Department of Public Health, which has been providing funds for their purchase since around 2001 to communities such as Cambridge that train each year to handle possible disasters. There are now around 30 of the tents throughout the state, Reardon said.

They join a significant arsenal of other Cambridge resources that can handle such threats, including a self-contained 18,000-pound, 10-person armored vehicle with a base price of about $189,000 (also bought with grant money, in this case from the Department of Homeland Security, and meant to be shared regionally in a crisis); robots built to detect hazardous materials; and more than 80 Cambridge firefighters trained as “hazmat techs” dispatched to emergency calls with filtered breathing apparatus and other tools near at hand. A March 2015 hearing of the council’s Public Safety Committee looked at the assets the city could bring to bear as security or emergency response, with some drawing concern from elected officials.

The armored “BearCat,” a retrofitted Ford F-550, is perhaps the most impressive tool, and not just because of its price. The fearsome-looking vehicle comes high-tech capabilities such as thermal imaging, radiation detection and its own air supply, so it can be used in “any potential situations involving dangerous subjects and/or hazardous environments” said Jeremy Warnick, director of communications and media relations for Cambridge police.

The city hopes to get more mass decontamination unit tents to deploy anywhere they might be needed, including at the scene of a attack or incident, Reardon said.

Their usefulness “depends on the chemical, the time of the exposure and a whole host of things, but we have to have these arsenals at our fingertips when we need them,” Reardon said.