Those brash upstarts, Mozart and Barnum, are stars of Moonbox’s next theater season 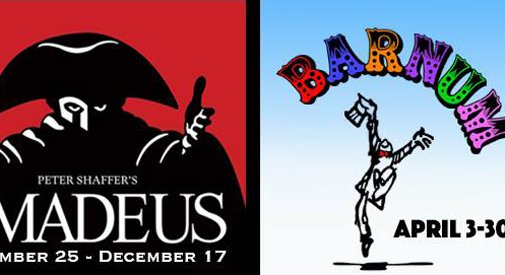 Those brash upstarts, Mozart and Barnum, are stars of Moonbox’s next theater season

It turns out composer Wolfgang Amadeus Mozart and hoaxer P.T. Barnum have a fair amount in common, starting with being the basis for the Moonbox Productions theater company’s 2016-17 season.

Moonbox, based in Harvard Square, will stage Peter Shaffer’s “Amadeus” from Nov. 25 to Dec 17 at the Boston Center for the Arts Plaza Theatre. Directed by Allison Olivia Choat, the Tony Award-winning play takes place in the Vienna of 1781, where emperor Joseph II’s favorite, the precise and pedantic composer Antonio Salieri, is upstaged by the crass but brilliant Mozart. Salieri must decide how far he will take his poisonous jealousy.

In spring there’s a musical selection: “Barnum” by Mark Bramble, Michael Stewart and Cy Coleman, playing April 7 to April 30 in the Roberts Studio Theatre at the Boston Center for the Arts Calderwood Pavilion, where it will be directed and choreographed by Rachel Bertone. The show traces the career of P.T. Barnum, called America’s greatest showman, from 1835 to 1881, the year he joined James A. Bailey to form “The Greatest Show On Earth” – in which the main attractions are freaks of society such as the oldest woman alive and the smallest man in the world.

In each of these fictionalized biographies, an individual pushes against the boundaries of propriety; and now each is remembered with reverence or for their relevance as metaphor – and as precursors of the country’s current artistic and cultural temperament.

“We are presenting two very different shows about two very different people, both of whom, nonetheless, have had profound influences on our culture and on our human experience,” said Sharman Altshuler, the company’s producer and artistic director.

Moonbox Productions, founded by Altshuler in 2011, has been nominated for several awards from the Independent Reviewers of New England and Boston Theater Critics Association. Altshuler said his company makes it a point to cast and staff shows with local talent and to partner a different local nonprofit organization for each show, giving them visibility on their website and in their promotional materials and providing access to audiences to raise awareness of their cause.