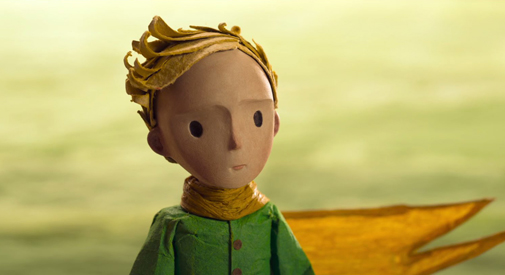 A simple story is given a grand home in Mark Osborne’s “The Little Prince,” a film adaption of the popular children’s book about a pilot stranded in the desert with a young Prince – himself fallen to Earth from the tiny asteroid he called home. The original story by Antoine de Saint-Exupéry was whimsical, with a fairy tale nature, and Osborne captures it wonderfully. 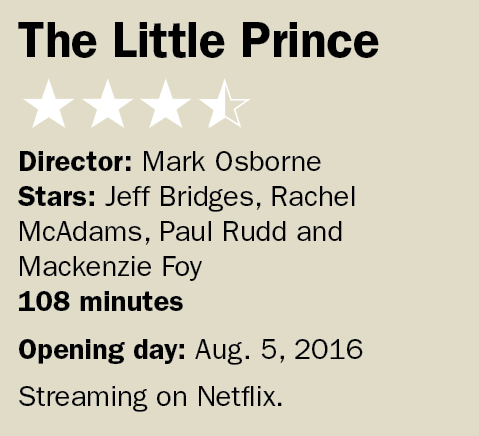 This animated retelling centers on a young girl (Mackenzie Foy) living a restricted, joyless life with her mother (Rachel McAdams). When the mother relocates them to a new town to ensure her daughter’s placement in a competitive school, they meet The Aviator (Jeff Bridges), who shares his life stories with the daughter, enlightening her about a world beyond books, rules and order, introducing her to one of magic, romance and disorder.

The road to the film’s Netflix debut hasn’t been easy, after a derailment months ago when it was mysteriously dropped from its theatrical release. While it’s nice enough to finally be able to watch the film – the original premiere was at the Cannes Film Festival in 2015 – it’s hard not to wonder what it would have been like to experience it on the big screen.

The film is beautiful, with The Aviator’s flashback sequences about the young prince being the standouts. So immense is the artistry that went into these sequences, which include a blend of stop-motion and computer graphics in a stylized approach similar to releases from Laika Studios such as “Coraline” and “The Boxtrolls,” that they could have worked as wordless pieces of the narrative.

The voice cast is uniformly great, with Bridges turning in one of his warmest and most lively performances in a long time, unfettered by not having to appear on camera and with his full attention going into imbuing The Aviator with a sense of undying fascination in the world around him; you can understand why the daughter would be so entranced by his stories. Later in the film Paul Rudd comes along and nearly steals the spotlight right out from everyone, and Marion Cotillard makes a memorable appearance as a lovelorn and sometimes vain rose.

The cinematography by Adel Abada and Kris Kapp adds touches of the fantastical. Sequences as basic as a girl furiously pedaling her bike in the rain are just as epically shot as anything from a Little Prince flashback, like when a giant globe of oversized glow-in-the-dark, stick-on stars come spilling out and encompass a make-believe city. The animation and the camera see the scope of the world through the eyes of the young girl, and that makes everything larger than life, as well as life-altering.

The story falters for a moment in the beginning of the third act as dreams and reality seem to blur, but the ultimate message of the film is so poignant that it helps carry viewers through the rough patch. (The film unabashedly tells viewers of all ages that being young may be something we all grow out of, but that will never mean we have to stop being curious or looking for magic in the world.)

Little slows the momentum “The Little Prince” rides from its opening credits to the closing. An instant classic for young and old, the film capitalizes on the themes of identity, what it means to grow up and the importance of staying curious with a gusto and enthusiasm that matches the film’s young lead. Osborne tries to make its viewers feel like children again, or at least remember what it meant to be one, and he’s succeeded.