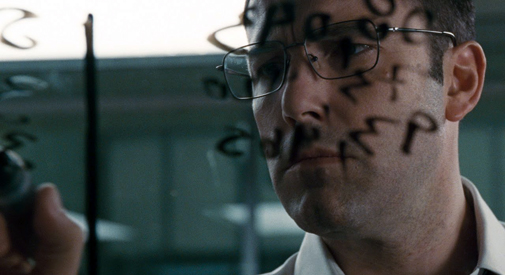 “The Accountant,” a far-reaching thriller starring Ben Affleck, asks much of its audience – but for some patience and suspension of disbelief there are rewards to be had as it morphs slowly and surprisingly into something more entertaining than it has any right to be. You could think of it as Affleck’s midlife answer (bat suit aside) to buddy Matt Damon’s “Jason Bourne” series, though Affleck alter-ego Christian Wolff isn’t a juiced-up CIA operative with a bad case of amnesia and a troubled past (though he does have that). As the title tells us, he’s a pencil-pusher, though one who incidentally can spatter a melon from atop a fencepost a mile out with a high-powered rifle; and should some of his clients take exception to his accrual methods, he can unleash a tirade of chop-socky martial arts to dispatch the deplorables with James Bond efficiency. 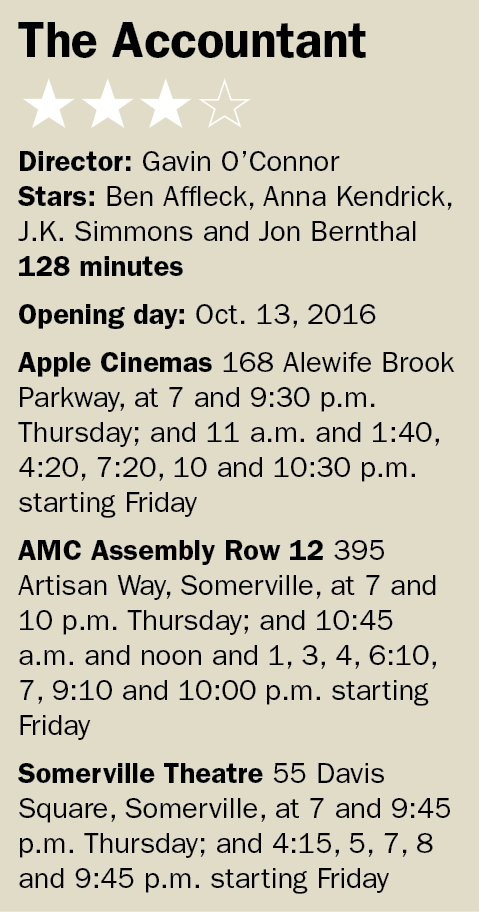 Few probably knew that balancing the books could be such a lethal endeavor, or that such a cockamamie idea, especially with the normally tacit and wooden Affleck, could translate into such a satiating pleasure – a guilty one. With ledger-entry care we get into it one plodding record at a time, beginning with blurry images of a hitman taking out linguini-eating mobsters in a scene that’s reminiscent of the young Michael Corleone removing the family nuisance in “The Godfather.” Then, before we get the assassin’s mug, we flash to a quaint country manse in the hills of New Hampshire where the young Christian (Seth Lee), having a bit of an OCD fit, is being interviewed by a doctor who specializes in children with Asperger’s and autism. It’s here, in the unhappy family moment, that we also learn that the lad can solve a complicated puzzle in 20 licks.

Affleck, possessor of a masculine square jaw and nonchalant affect, plays the mature Christian with sensitive quirk. He saves a floundering farmer’s land from the IRS by digging up hidden deductions, but when asked whether he likes the wife’s homemade jewelry, his disorder compels him to be brutally honest. The small strip mall near Chicago where the modest one-room CPA practice sits is a front for something more, and under Treasury scrutiny (Oscar winner J.K. Simmons is the dogged department head). Wolff, it turns out, has multiple identities and travels the world to hot zones to cook the books for drug lords, terrorists and assorted despots, folks that would normally retain his services and promptly inter the help when the task is done – but Wolff, a loner (get it? lone wolf), is meticulous with his documentation should push come to shove. Don’t be fooled by that geeky pocket protector.

The accounting conundrum du jour is tens of millions of dollars missing from the balance sheet of a company that makes bionic prosthetics to help improve the lives of war vets and those maimed on the job. Wolff, keen in his numeric excavation, cuts to the bone fast, but as he gets closer to making the numbers work, assassins start offing executives and a nerdy female numbers wonk (Anna Kendrick) Wolff admires for her sensitivity and numeric abilities is next on the list. Not very original stuff. It gives off aromas of “The Firm” warmed over for a second time, but Kendrick, blessed with subtly infectious effervescence, forges an edgy and palpable chemistry with Affleck’s repressed “Rain Man” savant. The backstory of the young Christian, raised by his strict special-ops dad (Robert C. Treveiler) after the mother, unable to deal with Christian’s affliction, abandons the family, bears fruit as well, and director Gavin O’Connor (“Miracle” and “Warrior”) holds it all together amazingly well and moving forward rife with tension, whether it be Wolff’s inner turmoil and lack of social ease or a nighttime ninja raid. The wide-ranging plot threads (including one about an Airstream camper in a warehouse), irrelevant and gonzo-seeming at first, tie up nicely in the end, making “The Accountant” an odd equation that adds up.