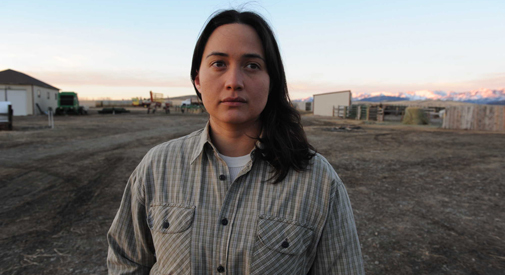 There’s little stitching together the three stories told in Kelly Reichardt’s “Certain Women,” and there may be some missteps in these intimate portraits – in particular a midsection with Michelle Williams that feels slight compared with the other two – but for the most part it’s a gorgeous film that finds beauty in silence and the mundane. 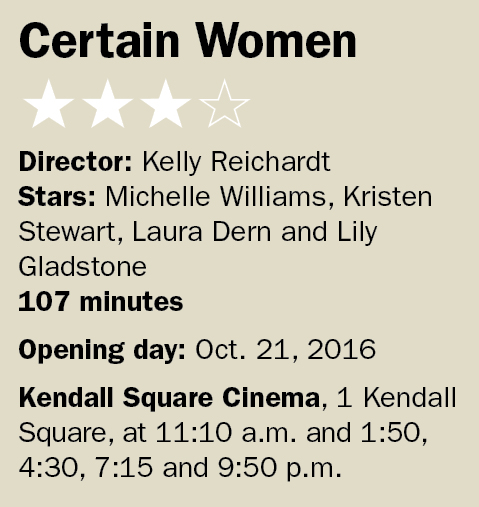 Reichardt’s prior film, “Night Moves,” angled for more of a thriller atmosphere, but she’s back to the interpersonal drama and slice-of-life motifs that have made her such an alluring director over the past decade, including tales in which Laura Dern plays a attorney working an uphill case made worse when her client, played by Jared Harris, tries violence to get what he feels he deserves; Michelle Williams plays a dissatisfied wife looking to build a home immersed in nature; and Lily Gladstone is a rancher who develops an infatuation with a night-school teacher, played winsomely by Kristen Stewart.

The three vignettes connect loosely, if at all, but are mighty in their condensed form. Williams’ portion is slighter in both run time and narrative, and feels superfluous by the end of the film. Williams is fine, as always, but the role doesn’t serve her as well as many of her other team-ups with the director.

Dern’s storyline proves stronger due to the interplay between her and Harris, an ordinary but tragic figure whose desperation and loneliness make for an interesting contrast to Dern’s apathy.

It’s Gladstone and Stewart’s characters and portion of the film that manages to captivate, prompting the question of how the film might have turned out if we had the chance to spend its entirety with these two. Gladstone in particular is alluring as a lonely rancher beginning to realize the world might extend past her small, rural town in Montana. She’s led to this curiosity by Elizabeth (Stewart), who travels four hours a day to teach a weekly class about law. It’s the casual friendship they build that ends up being so touching – not due to what’s being shown, which never becomes too explicit, but what’s promised. Gladstone is heartbreaking with a single look at Stewart, her eyes holding warmth and wistfulness she can’t bring herself to vocalize. Stewart delivers an enjoyable performance in her own right, adding another enigmatic role to a career made of them, and we understand why she would be such an intriguing prospect. She’s able to visit the ranchers’ world, but is able to leave at the end of the night, hinting at an untapped future.

The palpable chemistry solidifies our engagement in the characters who, performed by any other actors, might have come off as underwritten.

Reichardt is a filmmaker who enjoys standing apart from her subjects, content to meditate on the mundanities without ever belittling the idea of a simplistic life. She shoots the plains of Montana to highlight their beauty, but never feels the need to exploit that beauty, capturing it as just another element of life for these characters. She watches as they perform chores and discuss everyday issues. Reichardt is such an enjoyable and immersive storyteller because she understands the independent medium and is able to make small stories feel big. Her ability to tell slice-of-life narratives is so tremendous because she has an innate understanding and empathy for her characters and viewers; when we’re watching, we’re able to connect, regardless of who or what is taking place.