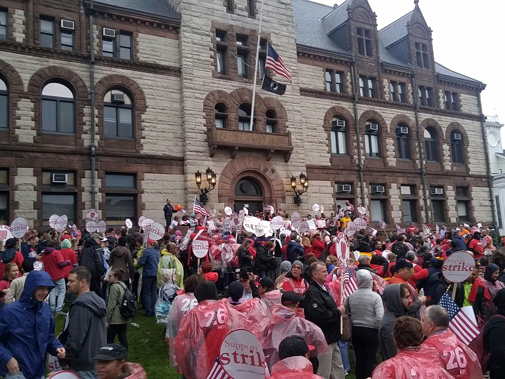 Harvard dining hall workers gather Friday at Cambridge City Hall for a rally. Click on the image to see the original tweet. (Photo: AlexTD via Twitter)

There’s no end in sight for Harvard dining hall workers now in their third week of strikes over wages and health benefits, but the university did sign an agreement Monday with its Graduate Students Union.

The agreement calls for an election Nov. 16-17 to allow for formal unionization for graduate students who teach and conduct research there. Harvard’s agreement not to fight unionization could speed the process with the National Labor Relations Board.

It’s part of a wave of demands for better conditions for graduate students who teach, such as those recently won at the University of Connecticut and New York University, and for lower-paid faculty at institutions such as Lesley University, Northeastern, Tufts, Boston University and Bentley. All have seen successful unionization efforts within the past couple of years.

“We have been working hard for the past year building our union, and it’s great that Harvard is willing to agree on the election process. This is an exciting step toward sitting down to bargain our contract with the administration,” says Jack Nicoludis, a graduate student research assistant in chemistry, in a press release.

The union the students aligned with – the International Union, United Automobile, Aerospace and Agricultural Implement Workers of America, called simply the UAW – believes the agreement and the November election will set the tone for how graduate labor is seen in schools throughout the country.

“This agreement will inspire an already-growing national movement of graduate employees,” said Dennis Williams, president of the union. “As one of our nation’s most prestigious universities, Harvard has wisely chosen to refrain from unnecessary litigation regarding the basic rights of these employees to form a union. Graduate employees, like all other workers, want a voice at work and the ability to negotiate with their employer.”

Meanwhile, the dining hall workers’s strike goes on despite dozens of bargaining sessions, supported by Local 26 of the Unite Here union as well as by a wide coalition of others – Harvard students themselves, and several Harvard organizations, as well as by city councils in Cambridge and Boston. Black Lives Matter activist and New York Daily News writer Shaun King spoke at Harvard on Sunday, pausing to state his support for the strike. Another supporter is Mike Connolly, the incoming state representative for the 26th Middlesex House District of East Cambridge and East Somerville.

The daily protests have ranged in size, from less than a dozen protesters marching in a circle by the Science Center Plaza to a march of more than 1,000 people that took place Friday, ending with a rally at City Hall.

On Monday, roughly 100 students and workers occupied the lobby of the of 124 Mt. Auburn St. administration building where talks were to take place, and about the same number protested outside, according to The Harvard Crimson.

Update on Oct. 25, 2016: The sides reached a “tentative agreement” around 1:05 a.m. Tuesday, the Crimson reported, but it must be ratified by the wider membership in a Wednesday vote.

Harvard media relations was contacted for comment on the labor issues.