‘Loving’: Their romance was transcendent, but couldn’t escape racist laws of the 1950s 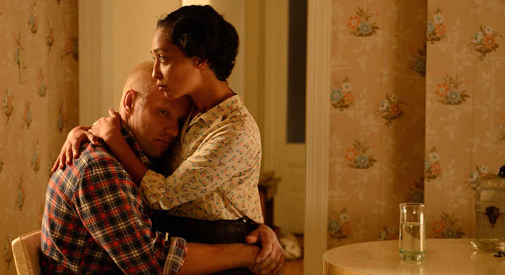 ‘Loving’: Their romance was transcendent, but couldn’t escape racist laws of the 1950s

The subtle beauty of Jeff Nichols’ “Loving” is that it doesn’t come out grandstanding about racism and hate, but instead moves in small wispy strokes – dreamily so, like a Terrence Malick movie, as it builds an unsavory portrait of a time in America when systemic bigotry was backed and enforced by the law. It’s quite a departure for Nichols, whose other features – “Mud,” “Take Shelter” and “Midnight Special” – were enigmatic teases with mysteries at their epicenters that begged solving in every frame. “Loving” contains no such machination; it’s based on the true story of Richard and Mildred Loving (played by Joel Edgerton and Ruth Negga), an interracial couple who were arrested for getting married in 1958 Virginia.

We don’t get a lot of backstory. We meet Richard as the lone white among a pit crew for a black drag-race team that bests an overconfident white lot at a local strip, and shortly afterward he’s cozying up to and necking with Mildred. They’re simple folk. He’s a bricklayer (watching him level stone and trowel off mortar is mesmerizing, and the possible metaphors for building foundations and walls becomes limitless as the film builds) and they’re devout in their country roots. Between the two, color is of no barrier, and initially no one has any discernible animus about it until the pair, following Mildred’s announcement that she’s pregnant, decide to tie the knot, something legally prohibited in their county. All problems have solutions – or in this case, bigger problems – and so, after the Lovings (a coincidental and poetically apt name) return from sojourning off to D.C. to execute their vows, they are arrested stormtrooper style in the middle of the night.

The driving force behind “Loving” is the couple’s enduring commitment to each other and their children. The bond is palpable and deep, even when they’re separated in jail or when Life magazine descends on their quiet (and secret) homestead after their case against the county is taken up by the Supreme Court. Nichols, knowing the story is in the history books, crafts it smartly around character and perseverance through adversity. It’s also a tale of female empowerment, as much as it can be in that time and place. Richard, strong but quiet, is the demurring one, while Mildred is ever circumspect and aware of the bigger game beyond the borders of their bucolic meadows. The casting of Edgerton and Negga is nothing short of inspired. Edgerton makes the most of his long face and unevenly square jaw, while Negga, with a soft freckled face and a luminous glow, becomes a revelation projecting somber knowing, Southernly politeness and calm, reflective wistfulness as she contemplates the dangers ahead and the options before. There’s never wavering by either regarding their love, and the issue of race is never raised no matter how high the heat is turned up. They’re transcendent and beautifully so, locked in an internal Eden while the rest of the world hates and wrangles over their right to be together.