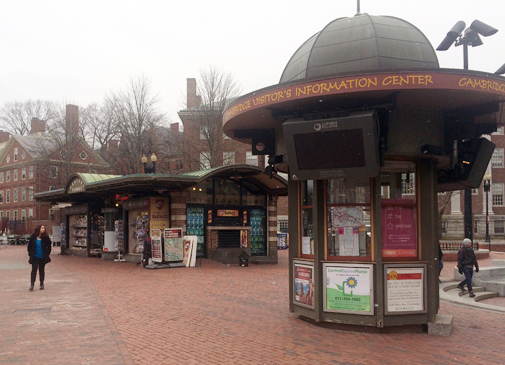 Harvard Square’s iconic kiosk, rear, is set to be converted to public use – potentially as an information center to replace an existing booth. (Photo: Marc Levy)

Officials bowed to pressure from the City Council last week, allowing more time to find a wider pool of consultants to shape what becomes of the iconic Out of Town News kiosk in Harvard Square.

“We recognize that there has been some confusion related to the scope of this … To address any confusion, provide an opportunity for greater community input into the scope and allow an extended time to promote [a request for proposals], we will suspend the current RFP and seek public comment on the scope and evaluation criteria,” Iram Farooq, assistant city manager for community development, wrote to the council.

The 500-square-foot kiosk is owned by the city and will become a public use of some kind; the newsstand operating out of it will be on a month-to-month lease until ousted for construction work.

In early November, some City Council members rebelled against a fast-moving redevelopment process and endorsed a landmarking study by the Cambridge Historical Commission. The commission voted 6-0-1 on Nov. 3 in favor of a study; a finding in favor of landmarking could prevent radical design changes at the kiosk, which dates back to 1928 and began as a subway entrance.

With $4.6 million already earmarked for renovations of the kiosk and surrounding plaza, councillors and residents have been concerned the redesign was a “train running” (in the words of councillor Dennis Carlone) and were alarmed to see a request for proposals come out Oct. 27 that gave consultants only a dozen days to submit questions and less than twice that to submit a bid – wrapping up the process by Nov. 17.

With the changes described by Farooq, there will be a three-week period for public comment on the RFP “and comments will inform any changes … before it is reposted.” The revised request will be posted for six weeks to draw more consultants to bid, she said, allowing for a scheduling change suggested by councillor Jan Devereux: consultant questions would be due Jan. 1, and bids would be due Jan. 31.

Councillors also wanted the public to be able to see consultants’ proposals on redeveloping the kiosk and running it afterward, but acting city manager Lisa Peterson said it wasn’t allowed by state law.

Calling it similar to hiring a firm to run the city’s citywide master plan process, councillor Nadeem Mazen said he still believed the public could see proposals and play a role in selection without having a vote. In the master plan process, “everyone got together and participated together and the city had a mind-read from everyone in the room on what they thought. They correctly deduced what everyone was thinking,” Mazen said. “Sometimes people are neck and neck and you don’t know who to pick, but [sometimes] there are three candidates and one is the clear winner.”

Devereux, puzzling over the fine line drawn by state law between placemaking and programming that allows or prevents public presentations, wanted city officials to keep an open mind. Peterson told the councillors she would give “additional thought” to allowing more public input on selecting a consultant.

The makeup of a kiosk working group also drew discussion. Farooq said to expect 10 to 12 members, including three to four residents from neighborhoods around Harvard Square, two to three business representatives (possibly from the Harvard Square Business Association) and three to four subject-area experts. A key characteristic for the members, she assured councillors, would be open-mindedness, so no one began the advisory work with a predetermined solution.

The advisory group’s work would also be open to the public, Peterson said.

“I always love to see an preponderance of residents,” Mazen said, urging a strong effort to bring in new voices from throughout the city. “There’s one fear in particular regarding the kiosk process that almost any business interest, and certainly the Business Association, is going to have an incredibly strong predisposition.”

“I think people will bring their biases, and I think they’ll be appointed anyway. I think they’ll probably have stronger opinions and more savvy in orienting the group than many other residents, and I’d love to see that avoided. But that’s the fear I have for all task forces and advisory committees but something I see borne out quite a bit,” Mazen said.

Councillor Dennis Carlone said the city had a good example to follow in setting up a kiosk task force: the group it brought together to examine the Volpe parcel in Kendall Square, which included several members of the public who were informed, outspoken and opinionated but had a “balanced attitude.”