Angry white men on film: Seven times cinema got to the Trump vote before us 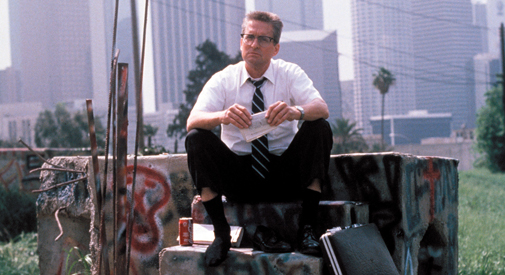 Angry white men on film: Seven times cinema got to the Trump vote before us

Most of us in the proudly liberal-leaning Hub are still in shock from Donald Trump’s historic and controversial “win” last week, making the demagogue the 45th president-elect. Throughout the presidential campaign there were near-riotous breakouts at Trump rallies and the candidate famously offended minorities, immigrants and, most resoundingly, women. “The Art of the Deal” Don looked primed to go up in flames at any turn and got away with language and behavior that would get any wage-earning wonk fired without a second consideration, but come Nov. 8 there was pushback from a certain populace in mid- and and Southern states who had been suffering quietly through the long, slow manufacturing ebb and were left out of the high-tech, life sciences and servicing surges – the non-college-educated white male, known as hard-working union members in more prosperous times, who had previously delivered swing states such as Pennsylvania and Michigan blue. We on the coasts scratch our head why, slow to realize the cold sting of disenfranchisement as a powerful motivator. Below are seven films that delve into the psyche of the dislocated white male, usually outcast, antisocial and operating outside the law:

“Hell or High Water” (2016)
Boston-born Ben Foster and Chris Pine (the new Captain Kirk) play brothers desperate to keep the family farm by heisting banks. Foster’s Tanner, just out of the slammer, has been there before, but Pine’s Toby is divorced and struggling to stay afloat financially and maintain a relationship with his progeny. The bureaucratic bank holding the homestead’s deed plays the heavy, and Jeff Bridges checks in as the sympathetic, but dutiful sheriff caught in the mix on the eve of his retirement. Pine and Foster make the frustration of hopeless conclusions, and the flight against them, deeply palpable. David Mackenzie, the British-born director who turned in the saucy “Young Adam” (2003), renders the Texas setting like a sequel to “No Country for Old Men” and registers one of the best films of the year so far. See also: “Out of the Furnace” (2013).

“All the Right Moves” (1983)
A young Tom Cruise plays a high school football star in dying steel-mill Pennsylvania who values his gridiron prowess as a way out of the economic dead-end, but his strict coach (Craig T. Nelson) may have other ideas. The death of the working-class American Dream and the despair as big biz going overseas for cheaper labor remains pointedly relevant. See also: “Hoosiers” (1986)

“They Live” (1988)
Aliens disguised as human are running the 1 Percent-favoring U.S. government. Sure, it’s the GOP, but the black comedy’s heroes – late wrestling icon “Rowdy” Roddy Piper and Keith David as out-of-work laborers looking for a scrap, who catch onto the scheme and start a proletariat revolt of sorts – were going to fight the oppressing power no matter who had their hands in the controls. Directed by horror-meister John Carpenter (“Halloween”), the social commentary is both bitingly funny and all too true. See also: “First Blood” (1982).

“Falling Down” (1993)
Joel Schumacher’s edgy Internet-bubble parable about a laid-off tech worker may be the paragon of the disenfranchised white male on film. Michael Douglas is subtly superb as D-Fens, the disturbed nerd, replete with pocket protector and a suitcase that may or may not hold tools of mass killing. Slivers of D-Fens’s fractured life and its inevitable crumble are breathed in surgically as he wanders L.A., an emotional time-bomb stumbling from one trigger situation to the next.

“Bubble” (2005)
Alt-icon Steven Soderbergh (“Out of Sight” and “Traffic”) directed this small gem about a midwestern town where everyone works at the doll factory and lives in the dull lull of the status quo – until a grim and gruesome murder. Shot in Ohio and West Virginia on a lo-fi budget, Soderbergh used nonprofessional locals for his cast, many of whom play an extension of themselves in their real jobs (or close enough). The portrait of the small town, clinging to one last golden goose – out of eggs – illustrates the hapless malaise before the impending financial famine and the seeds of rage.

“White Man’s Burden” (1995)
In an alternative America, blacks are the ruling class and whites are the ones who are uneducated and struggling to get out of the pit of poverty and the ghettos. John Travolta plays Louis Pinnock, a laborer in a chocolate factory with a wife and two kids who gets mistaken for a voyeur and is not only fired from his job, but beaten by police. He fights backs by taking the company’s CEO hostage. What could have been a biting exploration of social structures flipped upside down gets sucked under by the pandering need for plot points and resolution. A missed opportunity, but provocative nonetheless.

“Gran Torino” (2008)
Before he so infamously spoke to the chair at the 2012 Republican National Convention, Clint Eastwood directed this gritty boiler about a racist Korean War vet in old Detroit whose pride is the classic car of the title. With a war-imbued hate for Asians and pretty much wide disdain for anyone nonwhite, and a bit like good ole’ Dirty Harry, Eastwood’s embittered old coot rises to neighborhood hero status when he stands up to a harassing bunch of gangbangers.  The lesson in misguided bias and redemption is not only an echo of the 2016 election, but an apt lesson.