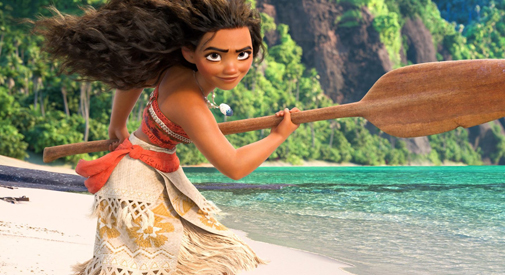 Moana is a 16-year-old girl living on a beautiful island in ancient Polynesia when a threat arises, caused by the long-lost demigod Maui, that could mean doom for her and her people. Stuck between staying or venturing out to sea to find Maui (voiced with obvious glee by Dwayne “The Rock” Johnson) and save her island, Moana (played by newcomer Auli’i Cravalho) must learn that her toughest decision will be to discover who she is and what that means for her future – familiar beats when it comes to the Disney narrative. 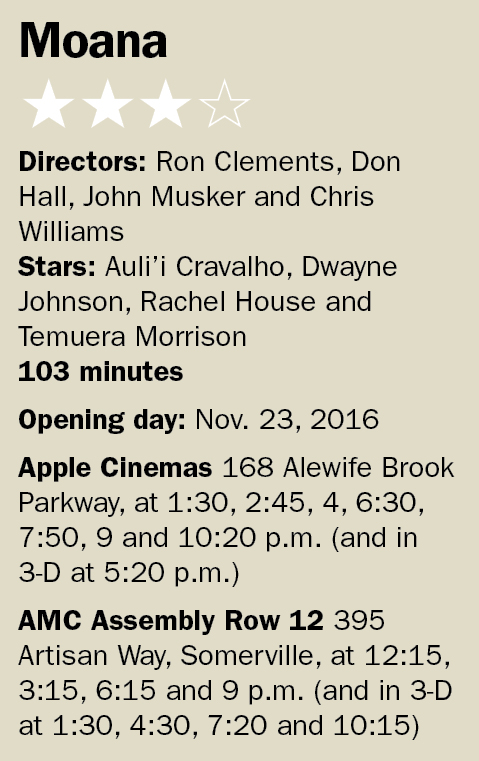 But “Moana” more often than not subverts them, ignoring any courtship or love interest for the leading lady, drawing her proportionately rather than like an animated Bratz doll, and presenting a narrative not only her own journey, but about a people and lost culture.

There is perhaps a moment where we have to wonder what this film would have looked like had it not been for the utterly infectious score supplied by “Hamilton” wunderkind Lin-Manuel Miranda. Numbers such as “How Far I’ll Go,” “Shiny,” “We Know the Way” and “You’re Welcome” demonstrates Miranda’s lyrical dexterity and intellect. He’s a natural-born poet with a hip-hop musicality, and it’s magical when the two combine.

Luckily, aside from a few missed beats, “Moana” boasts a script that is as scrappy, intelligent and empathetic as its leading lady. (Though it could allow Moana to make decisions unprompted by others – she has agency in theory; we just need to see her act on it more often.) “Moana” is Disney once again branching out, reaching past its own barriers and trying to create something singular that will stand out and become timeless.

In addition to transportive music and a sturdy script, “Moana” allows for stunning imagery, especially when Moana takes to the sea. From its playful but no-nonsense attitude when it comes to our young heroine, to the way it breathes life into the land around it and tells its own story, to how it helps tie Moana to her present, future and past, the ocean that nearly envelops her is its own character, and very much a heart of the film. Nearly as good is the beautifully designed homeland of Moana, which allows viewers to understand quickly why Moana the girl would be so attached and so determined to save it no matter the cost. From rowdy, impossibly dumb chickens to Jiminy Cricket tattoos and islands that transform into molten lava and crawl out of the sea, “Moana” is a feast for the eyes.

“Moana” probably won’t be remembered as one of the best films 2016 has to offer – or even as the best animated film of the year. But there’s no denying the immediacy and spiritual prowess it contains, managing to touch viewers with its understanding of the human spirit and the stubborn perseverance that comes with it. Warm, exuberant and with one of the most proud and delightful heroines for little girls to look up to in a long time, “Moana” may not be perfect, but you’ll be humming its tunes and dreaming about its images long after leaving the theater.