‘Rogue One’: Series goes back to the future, offers breath of fresh air in war-torn space 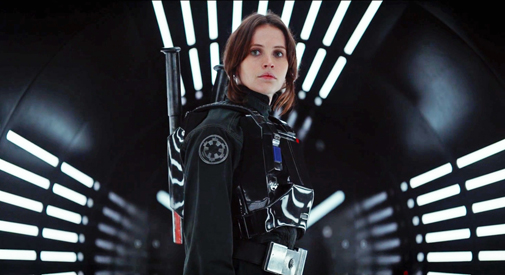 ‘Rogue One’: Series goes back to the future, offers breath of fresh air in war-torn space

“Rogue One: A Star Wars Story” postures itself as a one-off, the first (and only?) entry in the “anthology” series vs. the “saga” in which the other seven franchise films fall. It does slide in seamlessly in terms of chronology – just where exactly shall remain a mystery, as Disney has packed this change-up with nuggets of surprise, so much so that the company pleaded with critics to not burst any bubble in their reviews and “that you as press continue to be our partners on this journey.” Such requests generally go unheard, as most critics are aware of their responsibility to audiences and art. But having seen the film, I get it, and you will too. Though I am sure there are those out there that will spoil, I will not. 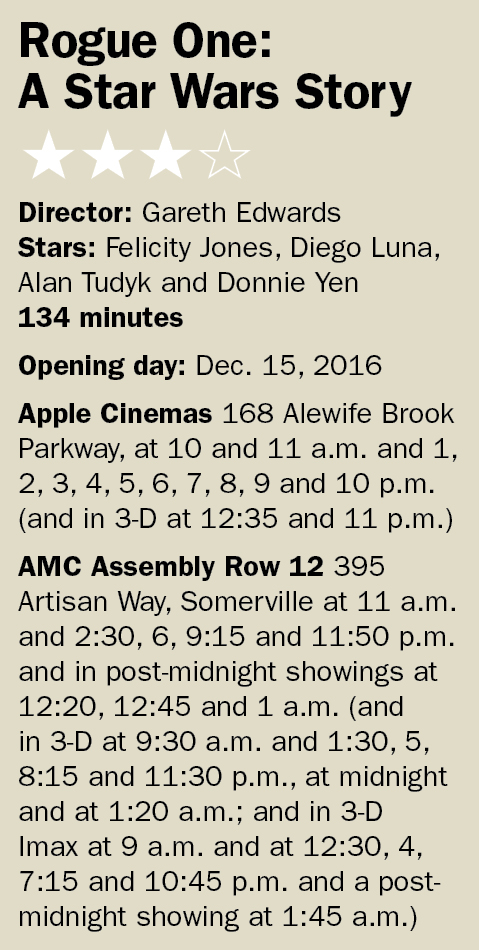 The big win for the series and fans overall when Disney took over the franchise from Lucasfilm back in 2012 was the infusion of new blood and reined-in filmmaking. No disrespect to creator George Lucas, but “Return of the Jedi” (1983) couldn’t hold a torch to the darker and meatier “The Empire Strikes Back” (1980), and the three films in the prequel trilogy (1999-2005) were wooden by comparison and so overpacked with CGI that all the character and mythos that cemented the original series got lost in a vortex of filmmaking overindulgence. “The Force Awakens,” J.J. Abrams’ 2015 initial go at the sequel series, was an admirable reboot, leveraging its ancestral roots while setting the stage for the next adventure even if it was too much a plot redux of “A New Hope” (the 1977 original that anointed and defined the blockbuster). And now comes “Rogue One” charging out of the gate, a breath of fresh air and more restrained in all the right places, but primarily in that it saves its best for last and is orchestrated so every laser blast and saber slash bears profound impact. There’s nothing indiscriminate about what’s onscreen.

As with most of these films, we begin on a desolate outpost where a farmer going about his business quietly (Mads Mikkelsen) is intruded upon by an Imperial detachment (led by Ben Mendelsohn as Orson Krennic, the Imperial Army’s director of advanced weapons research) with typical Draconian demands. Turns out Mikkelsen’s Galen Erso has some pretty specialized knowledge that the Empire wants to harness, and he’s coming with. His wife (Valene Kane) catches a laser strike for her interference, but his daughter, Jyn Erso, escapes and grows up into a capable rebel fighter (played with grit by Felicity Jones) under the tutelage of Saw Gerrera (Forest Whitaker, almost as hirsute as he was in “Battlefield Earth”).

The planet-hopping quest has Jyn trying to extract a message from an Imperial pilot (Riz Ahmed) who’s turned coats, catch up with daddy and steal the master plans for the plot point that shall not be mentioned. At her side through most of it doggedly hangs Rebel Alliance intelligence officer Cassian Andor (the dashing Diego Luna from “Y Tu Mamá También”), who provides a spark of romantic chemistry late in the game.

Directed by Gareth Edwards (helmer of the last “Godzilla” reboot), the choreography of space and terrestrial conflicts is one of the more judicious and realistic to date. It really does become a big-screen immersion event that washes over you with meted-out wow. Of the potpourri of ragtag rebels, action stars Donnie Yen (“Ip Man”) and Wen Jiang find their way into the mix as a blind Jedi with other heightened senses and a fighter with a master-blaster cannon strapped to his back. Of course there is the usual allotment of CGI-rendered aliens and a reprogrammed Imperial droid, K-2SO (Alan Tudyk), who has a bit of C-3PO’s snark and adds sass to every scene he’s in, even if he isn’t as indelible as the golden one or as cutely infectious as R2-D2 or BB-8. Jyn, for that matter, isn’t quite the spitfire that Rey was in “Force Awakens,” though they feel strangely akin – sisters perhaps, separated by space and time.

How it stacks up against the other “Star Wars” films: “Rogue One” is above the line, even if the franchise feels like it needs a makeover to get beyond the style shackles of the ’70s and the ’80s. It’s an enthralling go, with little pops of surprise and revelation that should please, nostalgically so. For the next chapter we go back to the future with the yet-untitled sequel series entry “Star Wars VIII.”