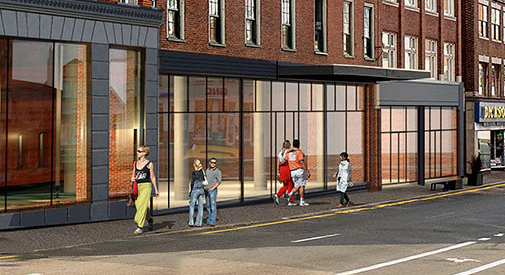 This is an open letter to members of the Cambridge Historical Commission.

From Suzanne Preston Blier, the Allen Whitehill Clowes Professor of Fine Arts and of African and African American Studies at Harvard University, on Dec. 15, 2016: There has been a lot of distress over the decision to approve (in principle) razing Harvard Square’s Corcoran Building at 9-11 JFK St. – now home to Urban Outfitters – contingent on developer Equity One presenting a viable design as part of the retail and office center to be called The Collection at Harvard Square.

A decision to potentially gut the historic Abbott Building at 5 JFK St. (home now to Curious George) and transform it into a lobby and access to the second story of what is best described as a large mall-like space is equally distressing. This is one of the reasons I and a number of other Cambridge citizens have submitted a petition asking for a landmarking study to be done with an eye toward preserving this beautiful historic building. In public comments, and in discussions of the commissioners at the past several meetings, I heard no one who favored gutting Abbott and putting in an elevator and stairs. It is not necessary. There are plenty of other places a grand entry could go that would leave Abbott with the historic integrity a building of this importance deserves.

For the Corcoran Building, among the concerns with razing the structure is that this opens the way for a new design of contemporary style, since Harvard Square Neighborhood Conservation District guidelines stipulate that when an original building fabric no longer exists one should “support creative, contemporary design.” This is consistent with the request at the meeting that the new design be different enough from the adjacent Abbott Building so as not to compete with it. But the thousands who commented on a Change.Org petition to save the existing Curious George, and the hundreds of local citizens who attended city meetings over the past few months, have argued strenuously for a very different outcome. Indeed, many are deeply concerned that this core area of Harvard Square is about to lose any real sense of its historic primacy. A decision to raze a structurally sound building in this district and then to create a work of more contemporary design only helps to reify the pessimism many of us feel about the commitment of the commission to helping preserve key historic areas of Harvard Square.

Preliminary support for razing the structure is more troubling still because business owners have said that meeting announcements should have been posted on the buildings’ exteriors and were not within the required time. So many more business owners did not attend.

I urge you to reconsider the razing, particularly in light of the very positive reception Equity One’s most recent (largely brick) plan received from the public and commissioners. It was indeed a strong and thoughtful design, and one that (with some modifications) fits the bill from the vantage of public perception of maintaining a sense of history in the area. Obviously Equity One was happy with the plan, or else they would not have proposed it.

While you may not be asked to consider other impacts (economic, environmental, safety), the outpouring of dissatisfaction by local merchants and others with the two- to three-year disruption that razing a structure would cause is key as well. Many more than the 24 current businesses in these buildings will likely go under – and for what? 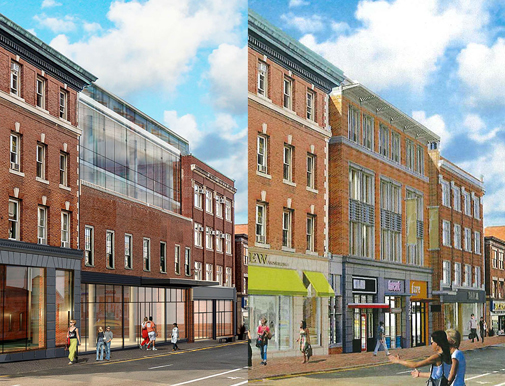 Developer Equity One has proposed a contemporary and more classic look for a project in Harvard Square.

I love contemporary architecture – I teach it, and I count several award-winning architects among my close friends – but to build such structures we need from the outset to select strong architects with great plans and propose sites that welcome it. The Corcoran Building is not one where a contemporary design makes sense.

In addition, I would hope that rather than green plants on the roof (which will likely not be maintained) Equity One should be encouraged to produce a state-of-the-art environmental design that imbeds the utility cube on the roof into the lower floor. I hope the pavilion on top will be removed or made considerably smaller, and that whatever windows or doors are added will be small enough so they do not emit extensive light that may be seen from Harvard Yard and adjacent areas from afternoon on in winter. Many of us have asked for nighttime light studies for this building. It should be required in other cases as well.

I also urge you to think seriously about impacts to the Abbott Building if the proposed Corcoran changes are allowed. I was distressed to learn that one of the possible moves for the commission is to approve the Equity One plan and only then turn to the petition for the Abbott landmarking study. One problem with the most recent Corcoran design is that it would require the removal of one of the Abbott’s most important features, the rear-corner cornices on each side that transition the structure to the adjacent building. As one approaches the building from Mount Auburn Street on either JFK or Brattle, this feature stands out in a particularly striking way.

The Abbott Building landmarking decision is important in other ways too. When you remove a floor, you will be able to see this clearly from the exterior in the lighting and movement within. From the street one likely will discern people walking up and down the staircase through the windows, and any number of other elements that cross between the floors. The changes proposed to the façade (removal of the plinth supporting the column near the door) as well as the lack of window framing mullion detracts further from the historic nature of this façade. The photograph of the Abbott Building taken earlier in the 20th century (as a post office) also reveals very clearly the differences that paint color makes to the historic integrity of the facade.

I consider what happens to the Abbott and Corcoran buildings to be one of the most important decisions facing Harvard Square since Harvard University tore down buildings to erect the Holyoke Center, setting off a chain reaction that led to the establishment of the Harvard Square Conservation District itself. The original design should never have been approved, and additions to the Smith Campus Center there only add to its massiveness.

I wish you all a wonderful holiday, and during it, I hope you will think about the present and future imprint of these important decisions, and what the next generations will say about the roles that each of us have had a chance to play in it.