After stunning with ‘My Chinese’ in 2016, Chu returns to youth poetry slam on team 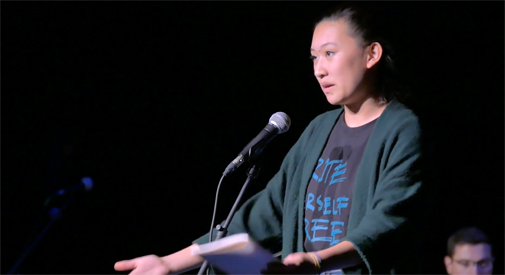 After stunning with ‘My Chinese’ in 2016, Chu returns to youth poetry slam on team

The preliminaries for this year’s Louder Than A Bomb youth poetry slam festival are this weekend in Boston, with more than 40 communities statewide sending teams of four to six young poets to compete.

This year, Cambridge is represented by a new team from the Buckingham Browne & Nichols private school. Cassandra Euphrat Weston, a poet who works with Louder Than A Bomb, points out that the team has a not-so-secret weapon: member Athena Chu, a junior who competed as an individual last year.

“Her powerful poem was featured at our finals showcase event,” Euphrat Weston said. It even got recognition from a Mic staff writer last year, and on the AsAm News site.

“Her words touched a nerve with a lot of people, including me. You don’t have to be Chinese to feel her powerful poem,” Ed Diokno wrote after seeing how the poem “brought down the house.”

This year’s preliminaries are from 11 a.m. to 8 p.m. Saturday and 11 a.m. to 6 p.m. Sunday on the fifth floor of the Sheraton Boston Hotel, 39 Dalton St., in Boston’s Back Bay. The next step is a semifinals round taking place April 25. Information on the events is here.