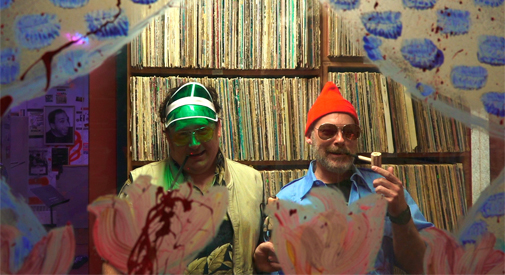 The first single off the Bill Murray album will blow your mind – and if that sentence confuses but excites you, you need to stream or download the first side of “Ill Murray,” eight tracks of danceable Bill Murray mashup that mine every line of dialogue ever spoken by the actor and every scene he’s appeared in for an astonishingly over-the-top feat of fandom.

The Bad Mancinis are Evan O’Sullivan and Troy Kidwell, alums of the legendary Pan 9 live-work underground art space in Allston, which was destroyed by fire in 2006 but left a legacy for ventures such as Jamaica Plain’s Whitehaus.

Their work since meshes well for the project. O’Sullivan is a video editor and artist (who performs all too rarely as the time-traveling Evan O’Television), and Kidwell is a musician, notably in the seminal Boston art-rock band Fluttr Effect, though the album is “a full collaboration” on sound and image, O’Sullivan said.

The origins of the album independent of the Bad Mancinis go back to the “Saturday Night Live” of 1977, when Murray debuted his Nick the lounge singer character. “Almost immediately Bill Murray’s unforgettable takedown of out-of-tune, oily, tacky hotel crooners, his signature fusion of music and comedy, became the stuff of legend,” the Bad Mancinis explain online.

It was O’Sullivan who noticed the Nick-shaped gap in modern music.

“It’d always struck me that no one in hip-hop had ever sampled Nick – you’ve got hooks there, albeit absurd and cheesy hooks. It seemed like an untapped resource,” O’Sullivan said.

Around two years ago he presented the idea to Kidwell, whose Bad Mancinis project had put out an earlier album without O’Sullivan with samples of dialogue from movies such as “Reservoir Dogs” and “Network” – and Kidwell was psyched. “We said, ‘Everybody likes Bill Murray!’ We might have a built-in audience, or even an audience who didn’t even know they were waiting for it,” O’Sullivan said.

The Problem With Nick

But while work began with Nick, the Bad Mancinis quickly discovered that the Paul Shaffer piano playing throughout the comedy sketches made it hard to sample the singing cleanly. In addition, part of the humor was that Nick sang eccentrically, paying little attention to time signatures.

“It wasn’t very loopable. We we kind of found the answer to my question,” O’Sullivan said.

Early versions of tracks wound up piano heavy and not funky enough, and with his own projects and Kidwell’s multiple band obligations, it was about a year until “the momentum kicked in, kind of like musicians jamming and finding their groove,” O’Sullivan said. At that point, the duo were meeting weekly and coming away with basically a song a week. O’Sullivan pulled a few hours video editing in a Davis Square, Somerville, coffee shop. The first “side” resulting – pegged to April 16, the 40th anniversary of Nick appearing on SNL – totaled about a half-hour of playing time, with the second side due this summer probably a little longer.

Nick does appear on the album, of course, including in the sublime “Dub2DubU,” his duet with Donna Summer on her “Love to Love You Baby.” But the band mined dozens of sources, from the earliest SNL to more recent films such as “The Life Aquatic With Steve Zissou,” and rabid sample hounds will find some of the most obscure tracks due this summer, including “some things people might not realize are actual Bill Murray samples.” (Kidwell does add actual instruments to the tracks.)

Some inspired connections are made from the multi-decade work of Murray in movies, television and public life that reveal O’Sullivan and Kidwell as truly higher-level fans. It’s one thing for a rousing monologue from “Stripes” to lead into a meta-acknowledgment of such moments from “Meatballs”; but the first single off the album combines the famous Dalai Lama story told by Murray’s Carl Spackler character from “Caddyshack” (1980) with visuals of Murray’s character arriving at a Buddhist monastery from his little-known early attempt at serious acting, a 1984 version of W. Somerset Maugham’s “The Razor’s Edge.” With that move, the Bad Mancinis reveal their total consciousness of the Murray oeuvre.

Of course, the track is called “Gunga Gulunga.”

Murray infamously improvised a lot of “Caddyshack” and is known for sneaking a bit of Buddhist philosophy – “Billosophy,” maybe – into interviews, so it’s possible his plan to do the post-World War I drama was already in his head when acting in the chaotic golf comedy, O’Sullivan said. He was happy making the connection, but downplayed a role in unearthing a cinematic obscurity.

“Yes, we spent a lot of time with Bill Murray, but haven’t we all? I think that’s the universality of it … everyone’s a little bit of an expert in Bill Murray,” he said. “He’s lasted through several generations of pop culture.”

More than a gimmick

The“Ill Murray” concept can sound like a gimmick, he said, but the Bad Mancinis have a genuine love for sample-based music, and the transition they made from making a pop culture joke to more than a dozen solid musical tracks has been reflected in people who have downloaded or streamed the first side of the album. “People have really been enjoying it, and responding to the music as well as to the novelty. They’ve been saying, ‘I’ve been enjoying this far more than I should be,’” O’Sullivan said.

Before premiering “Ill Murray” on Tufts University’s WMFO-FM, Kidwell admitted that he’d love if a copy of the album made its way to Murray. O’Sullivan has an extra level of aspiration.

“The dream would be that Bill Murray somewhere is listening to this album,” O’Sullivan said, “without even recognizing some of the samples of his own singing deep in the track.”