A different kind of bank takes out ads on T, seeking depositors whose waste saves lives 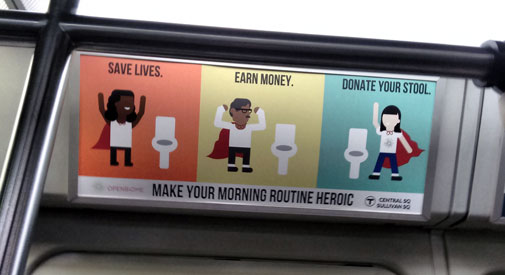 A different kind of bank takes out ads on T, seeking depositors whose waste saves lives

OpenBiome pays for transplantable feces, but only 3 percent qualify
By Sue Reinert 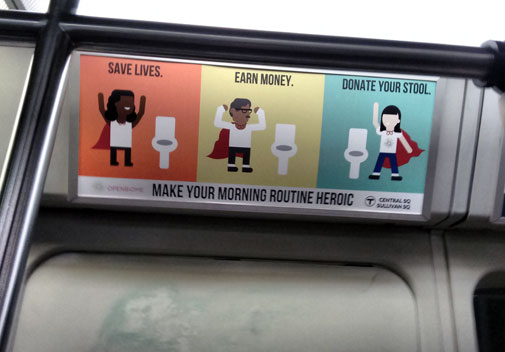 A Somerville company wants donations of something most people have plenty of, and don’t consider very valuable: stool. Now the company is turning to the MBTA’s red line subway to recruit donors.

OpenBiome, a four-year-old nonprofit, has been advertising on red line trains since the beginning of May. The aim: to increase the number of people who bring the product of their bowel movements to the company’s clinic in Central Square three to four times a week, said Carolyn Edelstein, director of outreach and public affairs.

The company also has a clinic in Sullivan Square in Somerville that accepts stool donations. And some hospitals, including Massachusetts General Hospital, have their own stool banks, Edelstein said.

The ads for OpenBiome, nestled among more conventional MBTA posters touting dentists, vocational schools, research studies and the like, sport cartoon figures next to three streamlined depictions of toilets. They exhort readers to “make your morning routine heroic” by donating. And they mean it – transplants of stool from healthy donors have been shown to help many people with a particularly stubborn and dangerous infection caused by antibiotic treatment.

The bacterium clostridium difficile, known informally as C. diff, caused almost 500,000 infections in the United States in 2011, and the number has been increasing. When people take antibiotics, particularly in a hospital, the drug can wipe out beneficial bacteria in their intestines, allowing C. diff to multiply there, sometimes causing severe damage and even death.

The usual treatment is to take another antibiotic that can defeat the C. diff. “In four out of five people the antibiotic will work, but for some people [C. diff] keeps coming back,” Edelstein said. Research has shown that transferring stool from healthy people into the digestive tract of patients with recurring C. diff infections will usually “clear the infection.”

“It’s become the standard of care for patients” who can’t benefit from treatment with the antibiotic, Edelstein said.

Two Massachusetts Institute of Technology students, one in microbiology and the other in management, founded OpenBiome in late 2012 after a friend was infected with C. diff. “For 18 months, we watched him struggle with this debilitating illness and failed treatments,” the organization’s website says. He recovered after a fecal transplant, but it took a long time to find the necessary stool and a doctor who could administer the treatment.

The experience inspired the two, Mark Smith and James Burgess, to found OpenBiome as a public stool bank. The organization provides frozen and filtered stool to hospitals for fecal transplants via colonoscopy, and, since 2015, stool capsules, it says. It also provides stool for research, both its own studies and others’ investigations.

At the beginning, the organization got donors from the student community, the medical profession and friends of people who had suffered with C. diff, she said. “In the early days it was just momentum from media coverage,” Edelstein said.

OpenBiome originally collected stool and processed it at Tufts University in Medford. It moved to Somerville and opened a clinic in Central Square when “we got too big for Tufts,” she said.

The company had revenue of $2.7 million in 2015, according to a filing with the Internal Revenue Service under the name Microbiome Health Research. With more than two dozen employees, the company’s net revenue for the year was $1.2 million. 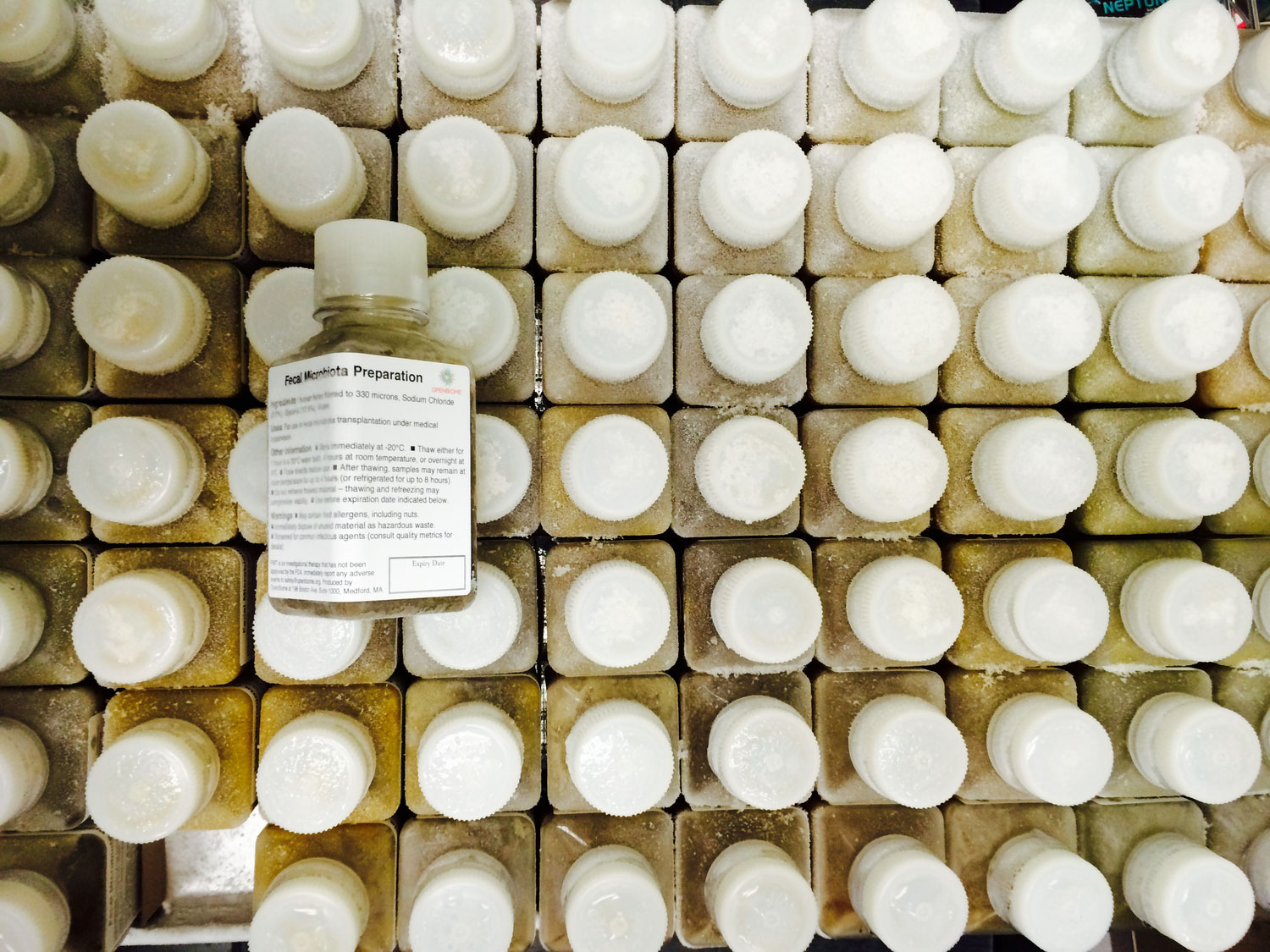 Fecal preparations are frozen and stored for use. (Photo: OpenBiome)

The red line campaign appears to be working. More people are calling the company about donating and “we’ve doubled sign-ups this week and last week,” Edelstein said Thursday.

That doesn’t mean they will end up donating stool. OpenBiome is picky about its donors, screening them for “any known transmissible diseases” spread by stool, Edelstein said. In addition, it doesn’t accept donors with conditions such as obesity and irritable bowel syndrome, where there is “emerging evidence” that bacteria in the colon may be implicated, she said.

Only 3 percent of people who apply to be donors make it through the screening, she said. The number of donors now fluctuates from 40 to 60. They have to be very local – stool must be processed within six hours of creation. And donors are asked to bring their stool three to four times a week for up to 60 days. After that, if they want to keep donating, they must pass a repeat screening.

If altruism doesn’t completely inspire them, they can collect $40 for each donation. And, Edelstein said, some may like the notoriety.“Some donors think it’s fun to drop this at a party,” she said, referring to announcing that they donate their stool.