The week in music, pop-punk The Dwarves to unique jazz-funk rhythms of Ghost-Note 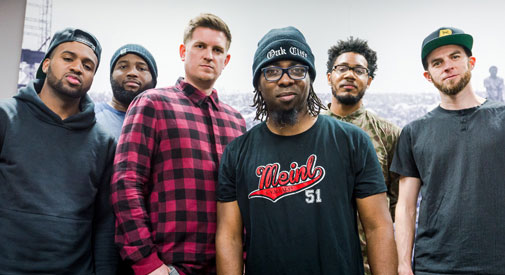 The week in music, pop-punk The Dwarves to unique jazz-funk rhythms of Ghost-Note

Summer is in full swing, and concert season along with it. Check out some of the most interesting artists coming to the Cambridge area.

21-plus show with doors at 7 p.m. at Thunder Road, 379 Somerville Ave., Union Square, Somerville. Tickets are $20 in advance, or $25 the day of the show. The bill includes The Upper Crust, Decent Criminal and The Skinny Millionaires.

A preeminent U.S. underground pop-punk bands since the 1980s, The Dwarves have edgy, hard-rock uptempo songs driven by crunchy guitars and group vocals, which provide a sound reminiscent of punk bands Agent Orange and The Vandals, as well as 21st century pop-punk bands such as The Story So Far and Transit.

18-plus show with doors at 8 p.m. at The Sinclair, 52 Church St., Harvard Square. Tickets are $15. The bill includes Blonder and Funeral Advantage.

Those looking for indie-rock, look no further. Day Wave – Californian Jackson Phillips (vocals, guitar) and his touring band – has smooth melodies, ambient vocals and fuzzy guitars that blend elements of The 1975, Hippo Campus and Sundara Karma. Day Wave’s rise began with the debut EP “Headcase” in 2015, and on May 5 it released its first full-length album, “The Days We Had.” The album is larded with potential hits, including “Something Here,” “Promises” and “Untitled.”

Singer-songwriter Kevin Ross’ heartfelt, soulful vocals and catchy instrumentals make him one of the most captivating up-and-coming soul and R&B artists in music today.

The band goes on at 10 p.m. at Atwood’s Tavern, 877 Cambridge St., East Cambridge. There is a $7 cover charge. The bill this night includes Scott Janowitz.

A weekly fixture in the Cambridge music scene, Gearan and Co. put on a performance toeing the line between blues, Americana and rock. Boasting an arsenal loaded with original songs and instantly recognizable covers, the Tim Gearan Band always puts on a good show.