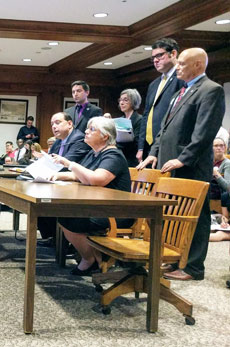 One key problem: Baker’s proposal lowers MassHealth eligibility based on income to 100 percent of the federal poverty line from 133 percent – meaning some 140,000 low-income adults would be forced off MassHealth and onto ConnectorCare, which costs more and offers less (no dental coverage, for instance).

Baker’s proposal also forces workers to use employer-sponsored insurance if premiums are less than 9.66 percent of their household income. While that may save MassHealth money, “federal Medicaid law, MassHealth regulations and the Massachusetts Connector’s affordability scale all acknowledge that no premium is reasonably affordable for individuals or families below 150 percent” of the federal poverty line, Connolly said in his early morning email.

Sure, the state faces a structural deficit, Connolly said, but “we should be looking to balance the budget through new revenues – and not by cutting benefits to our most vulnerable residents.”

These parts of Baker’s plan would make it even harder for families to rise out of poverty, said Progressive Caucus co-chairs state Reps. Byron Rushing and Tricia Farley-Bouvier in letters to the speaker of the house and budget conferees. The Budget Conference Committee may report on a final budget by the end of this week, and before that happens the progressives want all changes to MassHealth enrollees’ benefits open for public review and debated by the Legislature.

For Connolly, who represents East Cambridge and East Somerville in the 26th Middlesex District, it’s just more evidence that the only real solution to the health care mess is a single-payer, Medicare-for-all system.

“This is our best hope for controlling the cost of health care while guaranteeing universal coverage,” he said.