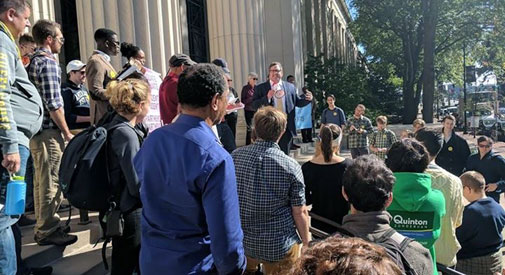 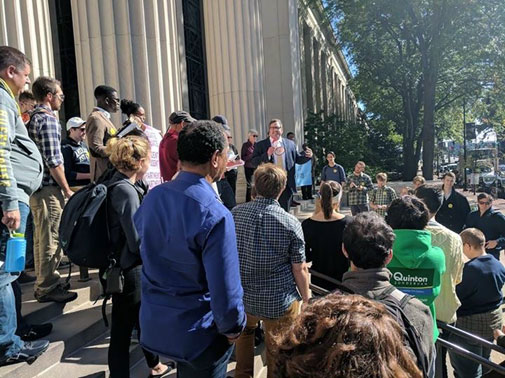 There’s a lot on the table as city councillors gather Tuesday for a final review of MIT’s proposed remake of the federal Volpe center in Kendall Square, with a sweetened list of community benefits dropped Monday that goes a long way – depending who’s doing the math – toward filling contentious graduate student housing needs.

Along with the known 1,400 units of housing and 2.5 acres of open space that will appear in Kendall Square over Volpe’s 14 acres, with government research being done in a much smaller footprint alongside it, there would be several other big-ticket items, said Israel Ruiz, executive vice president and treasurer at the Massachusetts Institute of Technology. Included in the packet are long-awaited access rights allowing the creation of a Grand Junction multi-use path, along with $8.5 million for design and construction.

The institute’s development arm committed also to spending $25.5 million on a Volpe community center, $8.5 million for transit improvements to ease the traffic expected from the creation of a neighborhood and $1.5 million to support a job connector program aimed at letting all residents take advantage of the square’s innovation economy.

“We look forward to explaining these new and expanded commitments to the council,” said Michael Owu, director of Real Estate at MIT Investment Management Co., promising an in-depth conversation at a 2:30 p.m. Tuesday meeting of the Ordinance Committee at City Hall, 795 Massachusetts Ave., Central Square. It will be the fourth committee hearing on the Volpe plan, referred to as Planned Unit Development Overlay District or and PUD 7 in municipal parlance, leading to a likely City Council vote before the petition expires at the end of October.

Councillor Nadeem Mazen had a different idea Monday, though, proposing that more time be taken to make sure everyone understood the proposal and new commitment letter and had a chance to explore all the options on open space – planners had previously suggested 7.5 acres of open space would result when Volpe was remade – and graduate student housing.

But the City Clerk’s Office had confirmed a pathway to refile the petition to allow for extra time and conversation, with approval coming Dec. 18 instead of Oct. 30, Mazen said, “and if we need that time, we should take it.”

Jan Devereux said she was intrigued by the idea of taking more time, which seemed worthy on a project “of this scale,” but the idea wasn’t popular among the other councillors, ranging from Craig Kelley’s blank skepticism to Tim Toomey’s rebuke of delay on bringing 280 units of affordable housing to the city, as well as movement on the Grand Junction pathway, a pet project.

The public’s comments on the Volpe plan and new community benefits offerings were also mostly positive, and residents who spoke looked forward to seeing a dead zone in the city turned into a vibrant, active space. Neighbor Andrew Lau referred to the current Volpe site as “a fenced-in void,” and Kendall business owner Michael Davies said he tired of seeing essentially “a parking lot – a barely filled parking lot.” Resident Jonathan Blount said he hoped the new homes, including 20 middle-income residential units, would reinvigorate Little League teams playing with fewer and fewer kids.

About one-fifth of the 25 speakers on Volpe were wary, with transportation and graduate student housing questions persisting even for people who liked the plans otherwise.

On Friday, dozens of members of an institute student group called Graduate Student Apartments Now rallied on campus and marched to City Hall to rally for 1,800 new graduate student apartments to be built, including 700 for families, citing a survey that suggested that much was needed not only to help 6,800 graduate students at MIT, but residents of Cambridge whose housing prices were soaring because of the competition.

The institute houses about a third of its grad students, but “the addition of 950 new beds will allow the institute to house more than 50 percent of its current graduate student population,” Ruiz said Monday, referring to numbers described in the community benefits letter.

The math perplexed some.

“I don’t know how we get to 950 graduate student ‘new’ housing as a quid pro quo for this zoning when 250 of those dorm units are already in process and 133 of them may already have been converted. That seems like 500,” said Carol O’Hare, a lawyer.

Kelly Blynn, an organizer with the grad student group, read a statement during public comment that commended MIT’s administration “for having the boldness to allocate real resources towards addressing the housing needs of its graduate students … We are, however, concerned that the 950-bed commitment falls somewhat short of the projected 1,000- to 1,100-bed shortfall.”

The need “is likely to grow in the years it will takes to bring more units online. We believe it would be prudent for MIT to consider these factors and revise up its commitment to at least meet the working group’s recommendations,” Blynn said.

Of the promised units, 250 are under construction and due to open Dec. 31, 2020, and another 200 to be converted or created will be provided or permitted for construction by that date, according to the institute. But the largest chunk, of 500 wholly new beds, will only have received their permit by then.