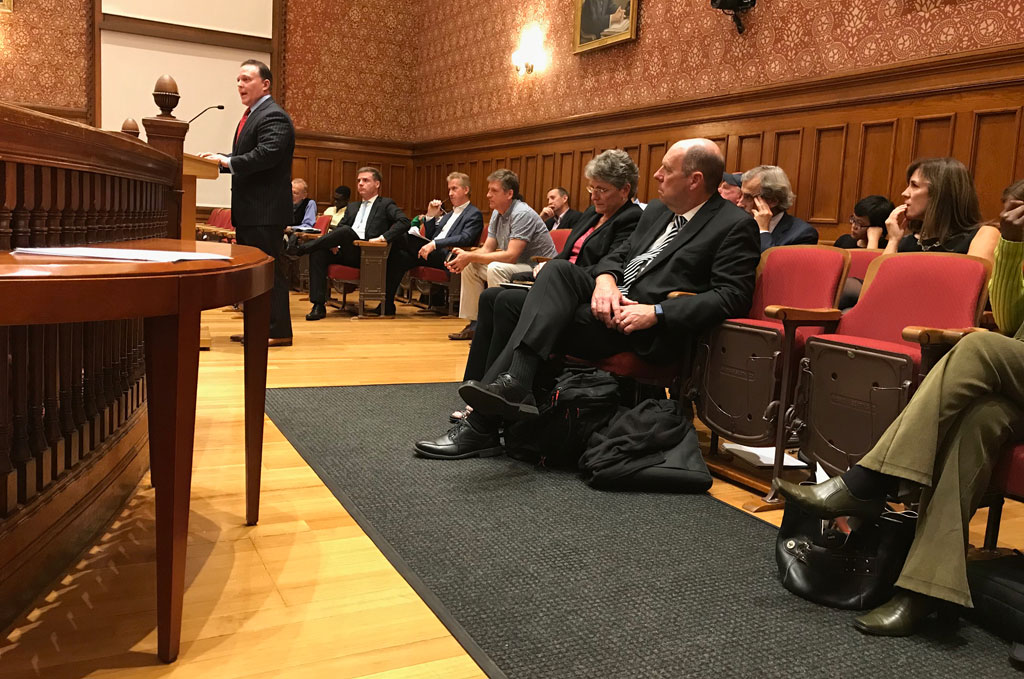 Anthony Galluccio speaks Monday to the City Council for Massachusetts Institute of Technology officials resisting adding a week to the approval schedule for zoning in Kendall Square. (Photo: Marc Levy)

Though a long design and permitting process is ahead, MIT’s redevelopment of the 14-acre Volpe site in Kendall Square won its zoning late Monday from the City Council.

Some 45 residents, business owners and Massachusetts Institute of Technology officials rose during public comment to talk about the project, taking up much of the meeting’s first 2.5 hours, but the meeting had about three hours more to go before reaching the needed votes. Afterward Israel Ruiz, the institute’s executive vice president and treasurer, signed a commitment letter of community benefits listing such things as open space, a community center and a notation that when built, the site would add $23 million annually to city property tax coffers.

It was details left loose in those promises that slowed a vote, with acceptance of the zoning and commitment letter going 8-0-1; councillor Dennis Carlone voted “present” for both because he was disturbed that more specific assurances couldn’t be locked down.

Carlone and fellow councillors Jan Devereux and Nadeem Mazen urged that an extra week be taken before voting – Oct. 30 would be the last regular meeting at which a vote could be held before the zoning petition expires – and Devereux voted with hesitation, while Mazen joined the ayes with resignation about “what I want and won’t get.”

Coming on the tax rolls

Based on zoning discussions, the city is due 1,400 dwelling units and 1.7 million square feet of office, research and development space with ground-floor retail. The entire acreage now is the John A. Volpe National Transportation Center; the research center’s footprint will shrink dramatically in redevelopment.

The federal building will go up first, with a roughly three-year construction aimed at starting in the spring of 2019, officials said after the meeting.

The institute agreed to pay the federal government $750 million for the parcel in January, and will need the money flowing in from renters and businesses to pay back its costs, councillors said.  But at the end of 50 years, MIT could decide it needs that space for academic needs that are nontaxable, Carlone said. If land is taken off the tax rolls, the school has agreed to give 10 years to phase in the exemption, up from five.

“We’re celebrating that we’re going to have this new money that in the next generation or two could be taken away,” Carlone said.

“Kendall Square is our prime tax-generation area, and MIT controls a significant part of it. From a stewardship point of view, we have to have this discussion,” Carlone said. “In 1961, Main Street was the border [for the school]. Now it seems like Binney Street’s the border.”

Most other councillors were less concerned, pointing to the institute’s history as a good partner for the city with a proven interest in commercial development – and saying that future city councils would have plenty of chances to extract longer-term promises as MIT came before them needing zoning or permitting over the next few decades.

Also left vague was whether open space would be a patchwork of smaller greenery around the 14 acres or massed in a continuous space of two or more acres – what vice mayor Marc McGovern referred to as a “Kendall Common.” An attempt was made by Carlone and Devereux to ensure a community center promised for the site would become part of the ground floor of an residential or office tower instead of becoming a freestanding structure, which would take away green space.

“When that open space is gone, it’s gone, and future generations may look back and say, ‘What were they thinking?’” Devereux said.

But councillors David Maher and Tim Toomey answered the notion of getting as much green space as possible by noting that the Volpe site’s existing several acres of open space has been fenced-in and patrolled, off-limits to residents, for decades.

Looking at the promised Volpe green space “in addition to the 2-acre park that Alexandria [Real Estate] gave to the city and three other parks in the area, not to mention the Broad Canal, and the Charles River and that area there … there is sufficient and overwhelming open space,” Toomey said. 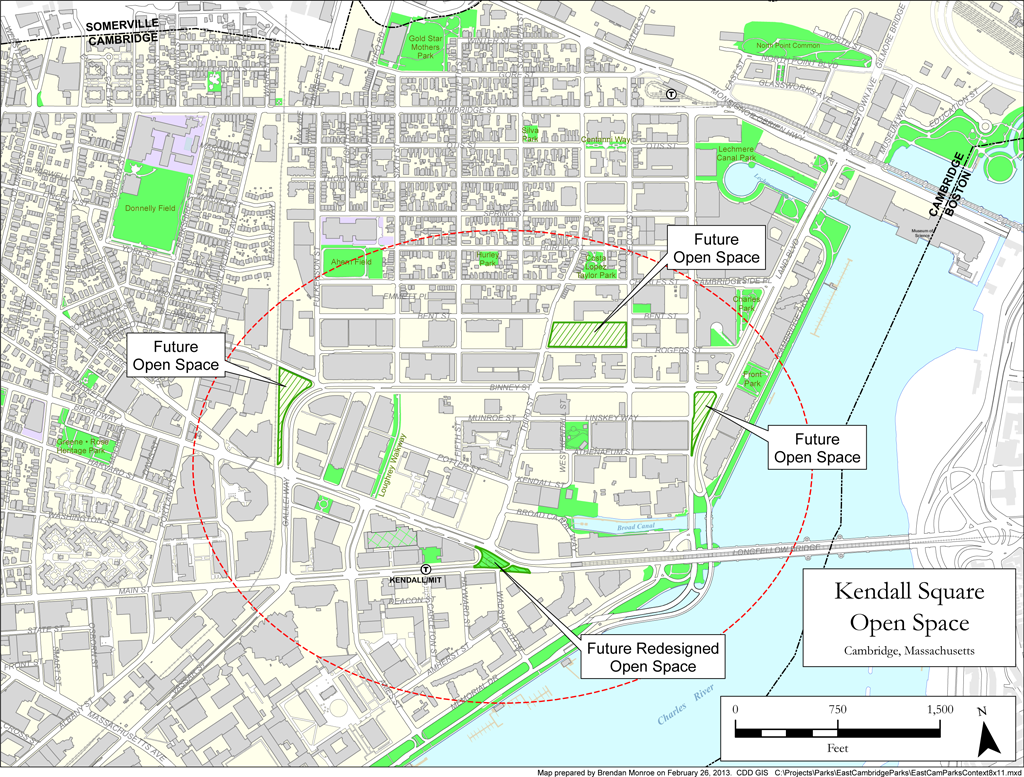 A map prepared in 2013 shows open space and green space in and around Kendall Square. Click to enlarge.

East Cambridge resident Heather Hoffman demanded during public comment that city officials address how the Volpe deal undid zoning mandating a 7.5-acre public park – adopted after the Eastern Cambridge Planning Study in 2001 and reiterated during the K2C2 studies of Kendall and Central squares that saw final reports issued in December 2013.

“No one has acknowledged it, that I’ve heard, much less talked about why it’s okay to break this promise,” Hoffman said. “Those promises were used to justify more and more and more millions of square feet of building in and around Kendall Square with insufficient open space because we were going to get that at Volpe.”

From city planners’ perspective, though, open space coming to the city since the planning study, such as Alexandria’s two acres, changed the math.

The vote played out in traditionally confusing Cambridge fashion. Pleas to take a final week to try to pin down details on a tax commitment, open space and graduate student housing were met with an insistence from councillor Leland Cheung – who led MIT zoning conversations with Carlone – that “I just don’t know what the subject matter is,” followed quickly by Cheung announcing that he wanted the cadre of institute official waiting in the audience to come up and address issues on the fly.

Instead, MIT’s outside legal representative, former state senator, mayor and city councillor Anthony Galluccio, begged a recess. When the group returned, he said that “all items went through an extensive approval process [that] we’re not in a position to alter” without consultation with institute officials who were not present. “We think what we’ve offered is responsive and sufficient.”

He urged officials to leave options open while trusting that MIT would take their concerns seriously and in good faith. “There are so many planning issues before us. The real planning goes on during the special-permitting process,” Galluccio said. “It’s a process we’d like to go through with the public and the Planning Board.”

The council went for it, perhaps aided by the assurances of Assistant City Manager Iram Farooq, leader of the Community Development Department, who assured them that “we have worked extra hard to make sure that [the deal’s language] is tight and as good as can be.”

In the end, officials and residents seemed agreed on a wish to just get started transforming Volpe and, therefore, all of Kendall Square. Resident Julie Callahan called its current condition “Anywhere USA” during public comment, followed by Alexandra Langer saying the square had “something missing. What Kendall Square needs is a sense of community. I believe Volpe can be that catalyst.”

“There’s no heart of Kendall Square,” Google’s Steve Vinter said. “This has an opportunity to be that heart.”