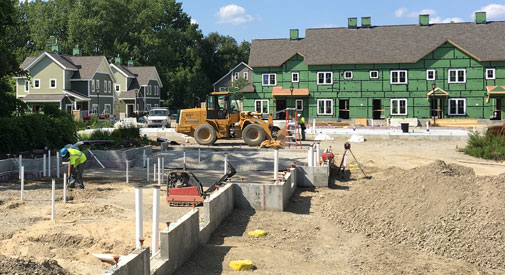 Construction is underway at the 42.5-acre Olmsted Green in Boston using a state law known as 40R. (Photo: Icon Architecture)

Let’s have a conversation about how to fix Cambridge’s housing crisis, rather than just acknowledging the crisis exists.

We are at a crossroads. When I was growing up in Cambridge, our city was a place of opportunity where families could gain a foothold and climb into the middle class. Today, it is increasingly difficult for Cambridge families to afford rent while also paying for child care, student loans and transportation. With all these rising costs, it is almost impossible for families to also save for a future within the city.

As the former deputy legal counsel for the Massachusetts Legislature’s Joint Committee on Revenue, I worked on policies to advance tax fairness and make investments in infrastructure and education. As research director and legal counsel for the Legislature’s Joint Committee on Housing, I now work to produce policies that promote affordable and middle-income housing, as well as smart growth – the creation of sustainable, mixed-use communities to live, work and play.

There is an opportunity for Cambridge to be a leader in smart growth and mixed-income housing. I have published a housing plan, and among my proposals is that we use Chapter 40R, the state’s Smart Growth Zoning and Housing Production Statute, to develop sustainable, multi-use neighborhoods that allow for our 20 percent affordable housing inclusionary requirement to have an impact.

Boston recently celebrated a 40R groundbreaking at Olmsted Green. This residential community will be a mix of rental, ownership, senior housing and community facilities on 42.5 acres. The 2005 Concord-Alewife study identified a similar vision for that neighborhood’s 130-acre quadrangle as a transit-oriented, walkable neighborhood. We should use this zoning tool to plan for the future of Alewife.

Using 40R is desirable because it requires planning and allows the city to access state funds as well as insurance against increased school costs that result from population growth due to new housing. Using 40R we would be entitled to three types of payments from the state’s Smart Growth Housing Trust Fund:

A zoning incentive payment based on the estimated number of units zoned.

A density bonus payment for each building permit issued.

A state reimbursement for increased school costs attributed to the development.

Density in the Alewife Quadrangle comes with challenges. Accommodating growth in this area puts a new neighborhood in a floodplain. We should be intentional with how we grow, take the climate change impacts seriously and plan for flood resilience. An additional hurdle that we must face sooner rather than later is the potential for increased traffic and congestion. By designating Alewife as 40R smart growth district, we would give the city an advantage in accessing discretionary state funds to mitigate these challenges.

For instance, the Massworks fund supports construction, reconstruction and expansion of infrastructure for sewers, utilities, streets, roads, traffic signals, curb cuts, parking, pedestrians and bikes. Also, 40R-style developments have a Massworks funding priority so long as 25 percent of the development is affordable. We should take advantage of this opportunity for state support.

Massworks has a proven track record. Last year, Massworks awarded Boston $3.4 million for infrastructure improvements around the Jackson Square MBTA station. These improvements included new pedestrian walkways and bike paths linked to the Orange Line station, a new public road, sewer line improvements and a new 3,000-square-foot community plaza. As a result, $62.6 million has been invested in the construction of two new mixed-income housing properties that will create 144 housing units, including 72 affordable apartments, and 2,400 square feet of retail space.

It is time for Cambridge to lead on this important planning and housing concept. My full housing plan is available at seantierney.org.

Sean Tierney is a candidate for City Council in the Nov. 7 elections. All candidates are invited to share their thoughts with readers and voters on Cambridge Day.