Most people understand that money in politics is a worsening problem even though it seems to be happening far away. In fact it affects us directly, and local reform is critical.

We live in a country with corrosive, systemic government corruption, but a belief nothing can be done about it. I respectfully disagree with the second part. Societies that set up an inclusive framework and protect property and human rights improve living standards, science, technology, medicine and the arts, and the United States is one of these. It is not perfect, and in the past 241 years improvements have been made, but there is work to do, especially today.

Corruption in U.S. politics has always been a reality. Laws addressing it have been enacted, but their effectiveness has eroded. Beginning in the 1970s things began to change in U.S. policy, creating a backward shift in allowing extractive institutions to funnel wealth to a small group.

There have also been more than 30 significant deregulation acts passed since, including those allowing more company mergers that create larger, more influential entities that further consolidated wealth. In 1980, the Depository Institutions Deregulation and Monetary Control Act allowed banks to merge and allowed institutions to charge any loan interest rate they choose. In 1999, the Financial Services Modernization Act allowed a single institution to act as any combination of an investment bank, commercial bank and insurance company.

Consider that when Charles Keating took advantage of investment deregulation and ultimately collapsed his firm in 1989, costing the government – also known as taxpayers – $3 billion, he was arrested and convicted. But the financial crisis of 2008 that cost taxpayers hundreds of billions of dollars ended without any criminal charges or even disclosures on how the banks used bailout money, or if it helped with mortgages or consumer credit. Now the banking industry is successfully lobbying to roll back parts of Dodd-Frank, making more financial crises increasingly likely.

These events bring us to today, when our government is essentially led by extremely wealthy corporations, banking firms and people. A study out of Princeton University looking at 1,779 policy issues from 1981 to 2002 found “the preferences of the average American appear to have only a minuscule, near-zero, statistically nonsignificant impact upon public policy.” 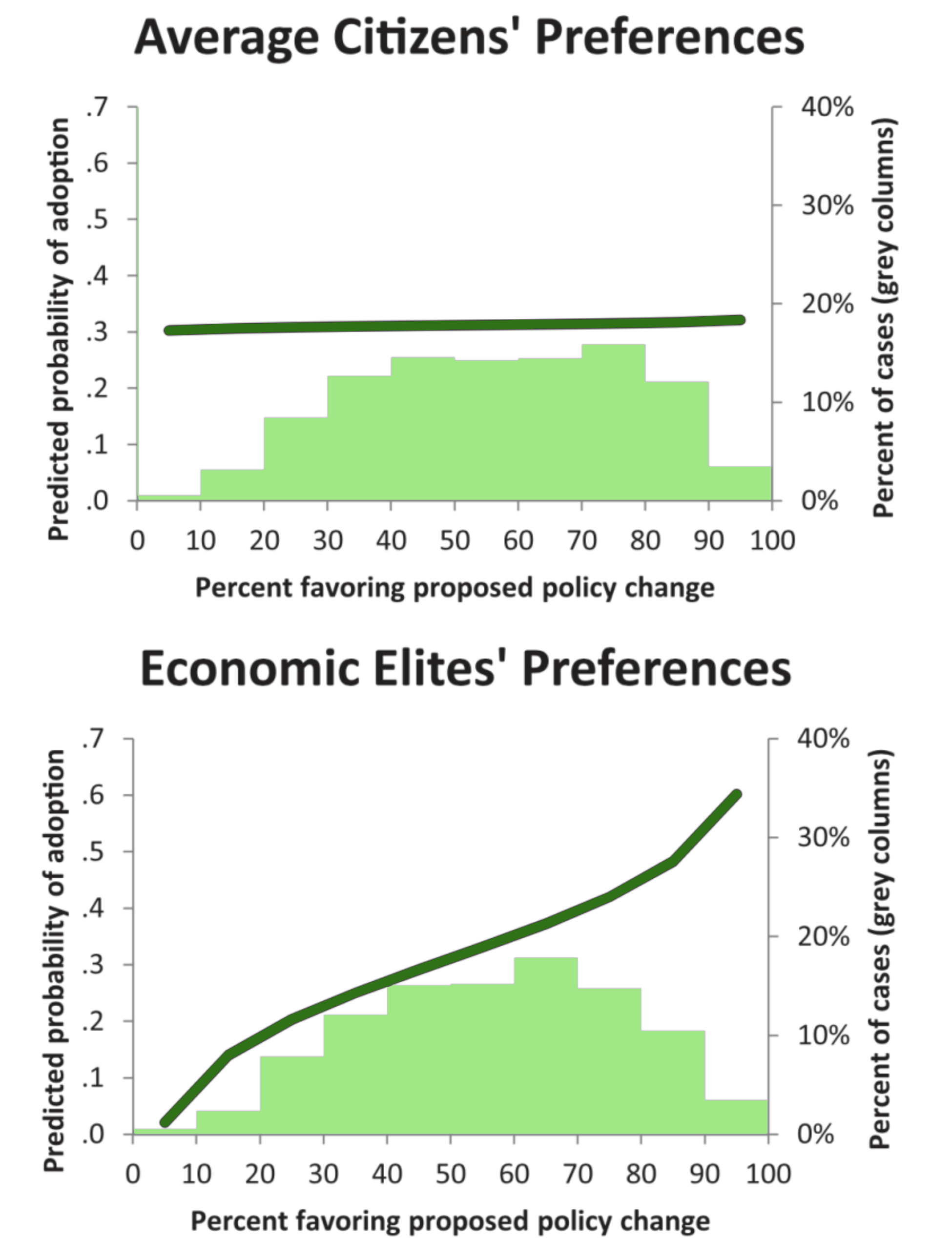 Why? One reason is that private funding of elections makes elected officials beholden to private interests, especially with the marked increase recently in the costs associated with running for office. A chart from Time shows campaign costs rose 555 percent from 1984 to 2012. 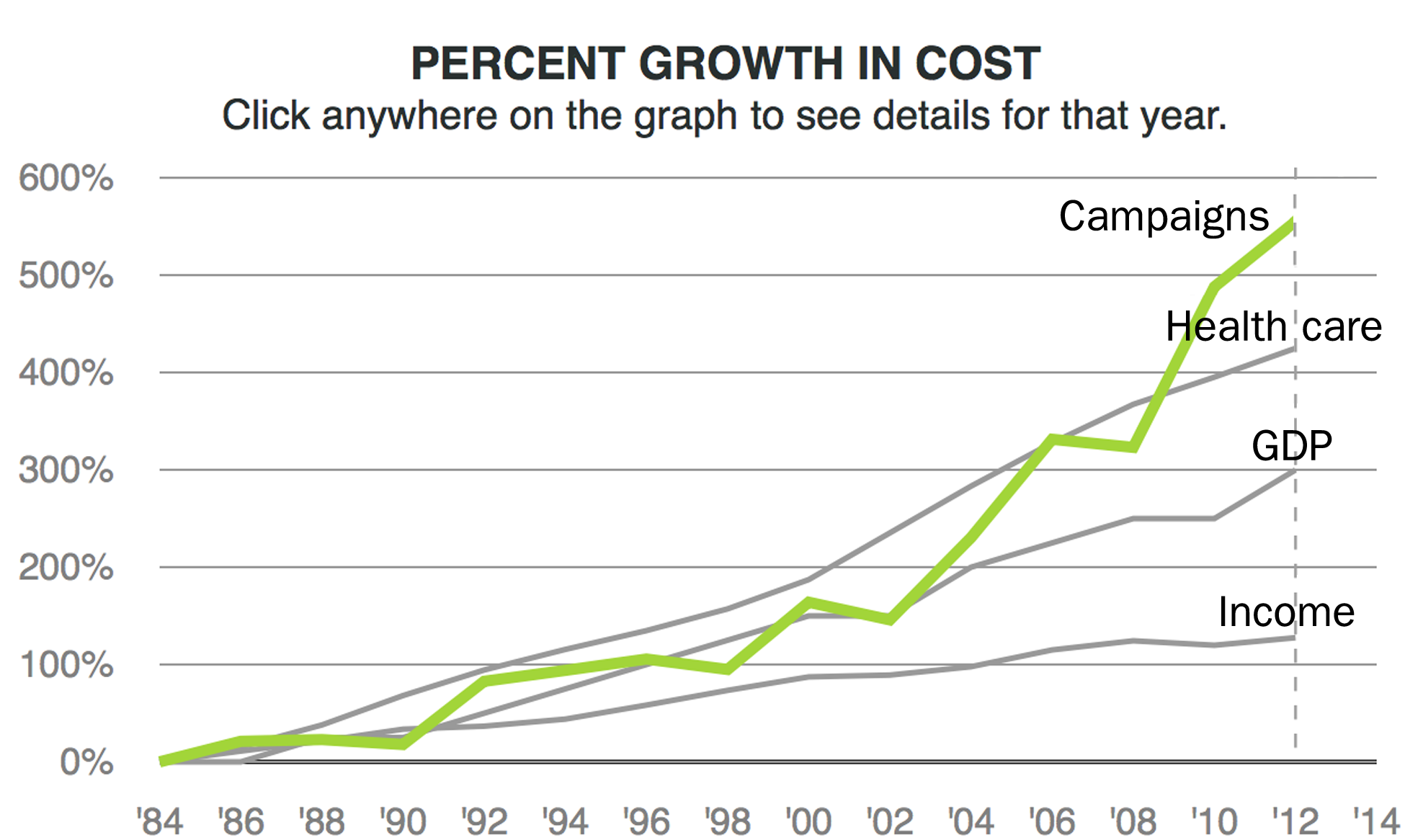 This means the top 1 percent of the 1 percent is essentially handpicking our representatives, who in turn listen only to their donors for policy changes.

The problems that are caused, influenced or simply not addressed because of political corruption include stagnant wages, expensive health care, a complicated tax code that benefits wealth, mediocre education systems, slow Internet, a catastrophic drug war, the prison-industrial complex, recurring economic recessions, a military-industrial complex driving unnecessary conflict around the world and inadequate response to the developing opioid crisis – not to mention the climate crisis and continued wealth consolidation.

Similar connections exist locally in Cambridge. When analyzing Office of Campaign & Political Finance information from the previous City Council race, there is a very strong correlation between money spent and No. 1 votes received. 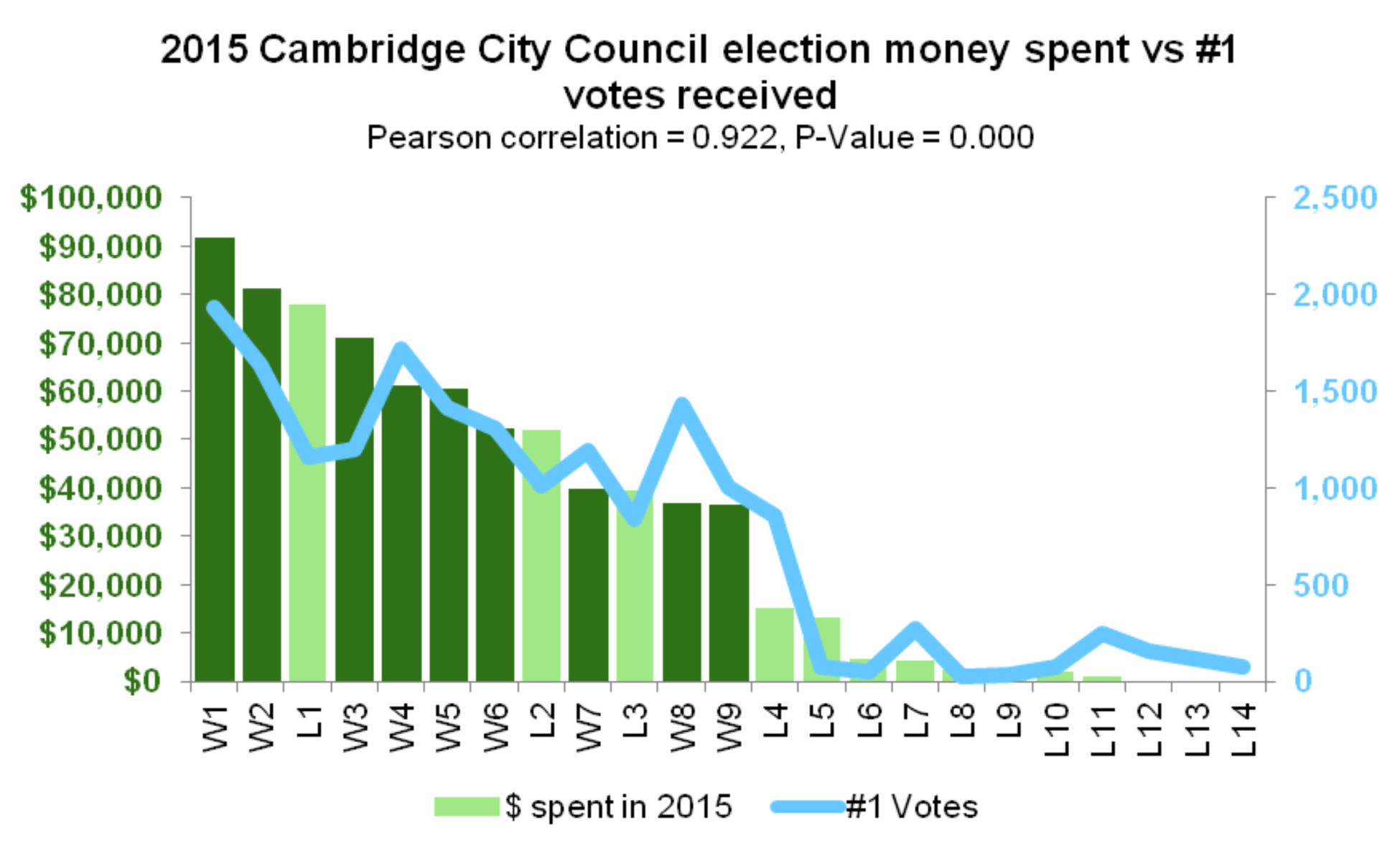 Winning candidates spent on average $59,000 in 2015. A poll early this year by Voatz of 611 Cambridge residents found 74 percent were concerned by the money spent in those campaign; 64 percent agreed Cambridge politicians are influenced by campaign contributions; and 58 percent supported publicly funded elections.

Seattle uses “DemocracyVouchers,” distributing $100 in vouchers to all voters in the city. Voters allocate it to up to four candidates of their choice, and the money is distributed to candidates from a public fund. Only candidates who swear off big-money contributions qualify to get the vouchers. Out of 16 candidates in this year’s primary, only four used the vouchers, and all four won their districts.

Berkeley and New York use donation matching. These programs work by having the city match small donations at a certain rate, say 3:1, increasing the power of small donations by multiplying their effect and encouraging candidates to reach more small donors.

New Haven uses lump sum grants. Programs such as this give candidates a one-time grant to fund campaigns, but only if the candidate has demonstrated enough support by collecting a set number of qualifying donations. This would mean candidates have to reach out to a large number of people to become eligible.

Corruption in our government is a vicious cycle in which the cost of elections put elected officials in debt to special interests that push policies for further enrichment. Polling has shown a majority of Cambridge residents are concerned and suspect donations influence our city officials.

The motto is “change starts locally,” and this is no different. There are proven solutions available that we can pursue. How can we ask Washington, D.C., and Beacon Hill to enact the necessary reform and expect them to take us seriously if we do nothing here in Cambridge?

Bryan Sutton is a professional engineer and first-time candidate for Cambridge City Council. All candidates have been invited to share their thoughts with readers and voters on Cambridge Day.