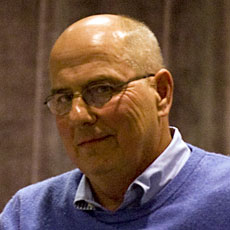 Fred Fantini has served on the School Committee for 32 years, and has been elected vice chairman by his colleagues the past three terms. A lifelong Cambridge resident, Fantini matriculated through Cambridge Public Schools and has long been active in Cambridge’s civic arena. Now retired, he spent 30 years as deputy treasurer for the Town of Arlington, was treasurer for the labor union chapter SEIU 888 and sponsors Cambridge Little and Major League baseball and girls’ softball teams. Fred was recognized with the Lifetime Achievement Award from the Massachusetts Association of School Committees (nominated by fellow committee members in 2012) and was honored for “advocacy and courage during times of great change over 30 years of public service.”

He has a bachelor’s degree in accounting and finance from Bentley College and a master’s degree in management, and earned a specialized graduate certificate in diversity from Cambridge College in May 1999. Fantini continues his education with courses and conferences, including in parent advocacy training from the Federation of Children with Special Needs. He has also worked with colleague Patty Nolan at the collective bargaining table, representing management during committee labor negotiations, and on the other side of the table as president of the SEIU/NAGE local 113.

Implementing the District Strategic Plan. The District Framework consists of five strategic objectives, 21 strategic initiatives and nine outcomes goals. It is important that the School Committee stays focused in working with the superintendent on implementation by working on a few major initiatives each school year, measuring and enjoying its success while we move on. With a city manager being an active partner with the schools by providing the necessary resources to support this plan, we should be successful moving Cambridge from a good school system to a great school system. It’s important to note as well that the committee each year evaluates the superintendent’s process to implementing this plan.

Reducing the achievement gap. One issue that is unacceptable to me is that fact we have not made progress in closing the achievement gap. The performance of our students at greatest social and economic risk continues to fall below the rest of the student population. These include families who live in poverty, in socially vulnerable family settings, in homes where they are not yet English speakers, or who are homeless or transient and do not remain long in one place. This is a statewide problem, not just in Cambridge, but we have done so much as a district and as a city to welcome and serve high-risk students and families that we want to protect our community investment by ensuring that we have high expectations for success for all our students. The committee and superintendent need to create a real sense of urgency – not panic – and a plan to end this disparity. MCAS standardized test results show that little progress has been made and no internal benchmarks have even been established. With the recent work with our professional development, curriculum development and district framework plan, I am encouraged that we are making progress.

Continued improvement in the middle schools. Ongoing support for the upper schools is essential to building a successful program in grades 6 through 8. It’s important we refine the upper school program to meet the Innovation Agenda goal of a providing a superior academic and social experience for all students that prepares them for success in high school and post-secondary education. We need to continue to provide support and make investments in the areas that will enhance the success in our middle schools. Students enjoy attending schools with larger cohorts of students instead of the isolation that many experienced prior, and the school system can provide enhanced offering in the visual and performing arts areas. The goal of having these middle schools racially balanced is also important to me. My goal is that every child leaving the middle school structure is ready to do rigorous work at the high school. Our new Superintendent must be more proactive in its decision-making, and the committee needs to encourage him and back him in these decisions. And it is critical that we engage and respect parents voice in this process.

Other issues include holding the superintendent accountable; addressing the physical needs of older school buildings; and developing a comprehensive plan with the city on early education.

Fantini’s statement to the Cambridge Education Association is here.

Fantini continues to be perhaps the most avuncular School Committee member and enthusiastically visits schools, events, parent meetings and other youth-related activities in the district, as well as staying up-to-date on education theories and practices. It makes him a very visible, approachable and well-informed committee member. He is not afraid to push back on the administration (or colleagues, actually) if he doesn’t like what he sees. Unfortunately, he continues to be uneven and biting when stirred. This term was not his most successful. Although the tone of the meetings improved greatly when he substituted as vice chairman when Mayor E. Denise Simmons was not available, he still failed at some important elements of his job. One was, as he has admitted, that he did not help Emily Dexter’s arrival as a new member, and there were points when he joined in creating a tone of disrespect and dismissiveness to her input. Like Kathleen Kelly, he has submitted a last-minute, nearly identical substitute motion to one of Dexter’s, apparently for the sole reason that he didn’t want hers to succeed.

While he joined Nolan in devoting many, many hours to successfully negotiating several staff contracts, his other governance responsibilities have been less notable. His role as vice chairman makes him the person who decides who chairs subcommittees; it seemed like obvious favoritism that by this fall, he had appointed Kelly to five and Dexter to only one (it has since risen to two). His governance subcommittee announced publicly that it was offering the job of executive school committee secretary to the person in the assistant secretary job without a search, and the subsequent search for her replacement was announced to colleagues without the promised review of the job description. To take nothing away from the people ultimately hired, one might hope that the committee could model behavior on transparency and openness for finding its own staff.