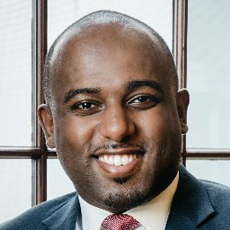 Gebru was born in Sudan to Ethiopian parents in 1991, but was moved to Cambridge when he turned 3. He attended the city’s public schools, and during his time at Cambridge Rindge and Latin School helped introduce an Eid holiday to the academic calendar, giving Muslim students’ celebrations recognition alongside Christian events such as Christmas and Jewish events such as Yom Kippur. He also worked on lowering Cambridge’s municipal voting age to 17 – the bid ultimately failed – and launched a monthly study group and think tank for those 18 to 40 called Young Cambridge Minds.

He is founder and managing director of Black Lion Strategies, a firm that works to strengthen relations between the United States and Ethiopia, and ran a nonprofit for 10 years also focused on Ethiopia. He has worked on city and state election campaigns and served on various board and commission, and is now on the board of directors of the Cambridge Community Center.

And, though only in his 20s, he has his own scholarship at CRLS that awards $1,000 to a graduating senior who has shown a passion for public service.

He was the first challenger candidate for City Council in this election cycle, having declared for the race nearly a year ahead of time.

Take the initiative and stand up for civil rights, civil liberties, and democracy. “I will demilitarize our police force, promote community-based policing and maintain civilian oversight to prevent racial profiling; uphold and protect the dignity, rights, and liberties of our LGBTQ+ residents; stand with state legislators and nonprofit organizations to protect reproductive rights and maintain access to contraceptives; tear down barriers to participation in local government to ensure and ensure all of our residents’ voices are heard; and maintain and protect our status as a sanctuary city.”

Mental health and substance abuse: “I will direct tax revenues from recreational and medicinal marijuana to support existing outreach and prevention efforts; expand access to naloxone for the public and first responders; increase funding to treatment and outreach programs that have proven to be effective partners in addressing the opioid epidemic; and partner with the wider Massachusetts medical and public health communities to explore innovative solutions to prevent further deaths from opioid overdose.”

Housing and development: “ I support the construction of more higher-density and transit-oriented housing and will work with the city’s partners to develop more housing on city-owned and vacant land, as well as support greater investments in Cambridge’s ‘Housing First’ program so that we can provide more housing for our most vulnerable residents, including the homeless, disabled, seniors and veterans.”

Economic justice: “Recognizing residents’ very real concerns about the influence of private funding on city policies surrounding housing and economic development, I will vote for a referendum to explore public campaign financing for citywide elections. I will vote to create vacancy and underutilization fees to prevent real estate speculation and encourage long-term development and efficient land use. I will enact financial measures to link institutional and corporate profits with funding for crucial economic justice programs, including municipal broadband. I will work to create the Small Business Resource Center, a one-stop shop, to ensure that Cambridge is a city where small businesses can start, thrive and sustain and will support legislation like New York City’s Small Business Jobs Survival Act to protect local independent businesses in the face of increasing rents, taxes and other costs.”

Education and 21st century skills: “My priorities are to provide funding for universal prekindergarten; create a unified Computer Science for All program; and address systemic racism, classism, and sexism as reflected in public school curricula and staffing and to create a culturally sensitive learning environment.”

A Better Cambridge: “Samuel Gebru is an Ethiopian native and 2009 graduate of Cambridge Rindge and Latin School. Despite being among the youngest candidates running for City Council, he has an extensive record of leadership in community organizing, policy work, and advocacy. He is committed to preserving and expanding housing opportunities for residents of all incomes and creating ownership units for low-income residents to build pathways to wealth and equity.”

Gebru has prepared and run a flawless campaign, planning comprehensively, starting early and executing with energy and well-practiced skill, but that’s less a surprise than a pleasant affirmation for someone who’s been engaging with municipal politics since he was in high school. Between his biography and campaign pledges, a vote for Gebru checks a lot of boxes in terms of representation on the council, which must keep immigrant and minority populations in mind especially in a moment of political upheaval nationwide.

If anything, Gebru is such a good candidate that it raises fears of whether a youthful mastery of politics – leaving no stone unturned, his campaign even experimented with Snapchat, which wasn’t even a factor in the campaigns of younger candidates such as Nadya Okamoto and Will MacArthur – translates into great and substantial policymaking. If a first term fulfills the promise of this detail-oriented, professional-level run for office, Cambridge can be exceptionally proud of its homegrown talent (and reassured in the quality of student Cambridge Public Schools is able to produce).