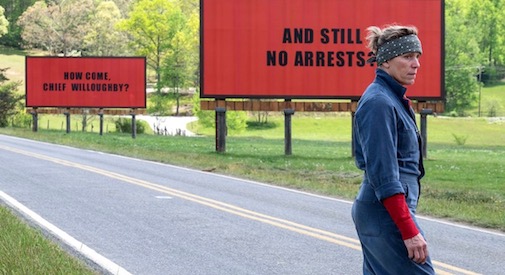 Director Martin McDonagh, a playwright best known for such dark comedies as “The Pillowman” and “The Cripple of Inishmaan,” put film audiences on pleasurable, if uneasy, heel with his cinematic crossovers “In Bruges” (2008) and “Seven Psychopaths” (2012). Humor amid violent doings – the graphicness of which you couldn’t make happen in the center of a stage – was the takeaway from those first two films; Tarantino meets the Coen brothers is in the ballpark, and what a glorious one it is. But McDonagh’s vision and style is something of its own, and it operates on its own bloody terms. “Three Billboards Outside Ebbing, Missouri” is more of the same, and a bit of a feminist anthem that arrives coincidentally, and poetically, as entertainment heavies including Harvey Weinstein and Louis C.K. are eviscerated for lewd and criminal sexual behavior. 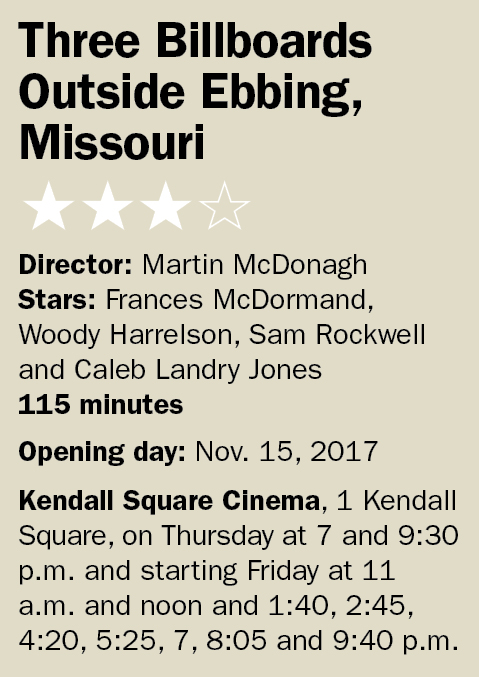 As if a Coen influence was not enough, the film stars Frances McDormand, who ruled the roost in the brothers’ masterworks “Blood Simple” (1984) and “Fargo” (1996), for which she won an Oscar. (She’s also married to Joel Coen). Here McDormand plays Mildred Hayes, a steely eyed woman who’s responsible for the three billboards of the film’s overly long title – and something of a bother to the town. Against blood-red backdrops the billboards say “Still No Arrests?”; “How Come, Chief Willoughby?”; and “Raped While Dying.” They concern the death of Mildred’s daughter, which has gone unsolved for months. Mildred blames the town’s beloved sheriff, Willoughby (Woody Harrelson, able to keep pace admirably with McDormand).

We meet Mildred’s daughter briefly in a flashback, as she and Mildred argue over the use of a car. The girl says something along the lines, “I’ll probably get raped,” to which Mildred says “I hope you do.” Yup, it’s that kind of a movie. Willoughby’s dying of cancer, Mildred’s lethal snake of an ex (John Hawkins) has a rep for using his fists on women and there’s a dimwitted deputy (Sam Rockwell, so good for McDonagh in “Psychopaths” and nutty solid here) who likes to brutalize people of color and would as soon pistol-whip a suspect for a parking ticket and throw them out a third-story window than file the paperwork. It doesn’t help that he drinks 24/7 and lives with a controlling mother (Sandy Martin) who may be the most evil serpent in the grass of Ebbing.

Rife with tension, the film feels like a bomb about to go off, and at one point it does. Throughout it all, Mildred maintains her stoic contempt and demand for justice, and you begin to wonder why she can’t afford Willoughby one ounce of compassion – he’s no slacker, and has done just about everything within his power regarding the case. Mildred’s relentless pursuit is almost to a fault, but the flashback scene and how the town begins to act out against her sets her right in her quest for justice.

To get to the end, several characters endure extreme emotional and physical pain. In the ugly, bloody denouement there are moments of atonement and redemption. But what of justice? McDonagh, well studied in the matters of suffering and the harsh truths of reality, offers no easy answers or outs, and as a result, the dust from the turmoil lingers, suffocatingly so. The whole experience, like McDonagh’s earlier films, unfurls with a stage-like texture. It’s a funky surreality that adds and detracts teasingly from the overall effort, aided by a Southern setting from McDonagh, who has Irish and British citizenships. Then there’s McDormand’s Mildred, who runs a gift shop but dresses in overalls and a bandanna like a mechanic. I half expected her at some point to swap out a spark plug or perform an oil change – just more lyrical WTFs that serve to deepen an odyssey into the realm of the tortured seeking but never finding.