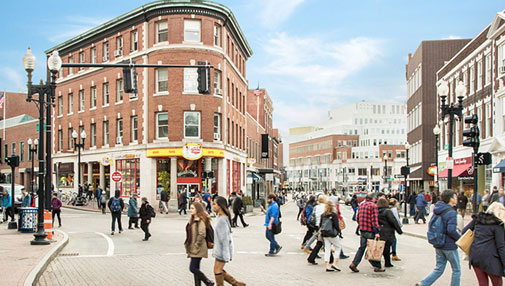 Regency Center plans for The Abbot Buildings keeps The World’s Only Curious George Store, though probably not at its its location at the corner of JFK and Brattle streets.

The World’s Only Curious George Store has reached an updated lease agreement with Regency Centers that will allow it to remain in Harvard Square – first staying in its location at the corner of JFK and Brattle streets until developer Regency gets city approvals to begin renovations, then moving to a temporary location in another part of the building during construction.

In constructing a retail and office project (formerly called The Collection at Harvard Square, now called The Abbot Buildings), Regency Centers was to remake the Abbot building (at 1-7 JFK St.) and the neighboring buildings at 18-24 Brattle St. and 9-11 JFK St., ousting the iconic Curious George book and toy store for construction and likely, based on experts’ analysis of developer costs, with far higher rents.

But having bought the project from previous developer Equity One, Regency is proposing a phased approach to construction that will create a space for the relocation of Curious George during renovations, then find one near the current storefront where Curious George will stay under a long-lasting lease with terms “favorable” to all, according to a Regency representative.

“Curious George is a product of Cambridge, and our home in Harvard Square is critical to both our identity and the success of the store,” shop owner Adam Hirsch said. “We are pleased that Regency Centers was willing to work with us to find a creative solution.”

Hirsch stressed that Curious George was open for business for the holiday shopping season, along with other retail in Harvard Square.

“Given that one of our priorities for this project is maintaining a dynamic and interesting retail mix in Harvard Square, we knew it was imperative to find a way to maintain Curious George as a tenant in our building,” Stiebel said.

McGovern said he applauded the Regency Centers team for listening to the community and finding a way to move forward with the project that includes Curious George. “Harvard Square has long been known for the strength of its independent retail,” McGovern said. “I’ve been clear since day one that keeping Curious George in the Abbot building would set the tone for the kind of project this would be.”

Updated proposals for the updated Abbot buildings require review by the Cambridge Planning Board, which is underway. A timeline for renovation and construction is contingent on final project approval.

Steibel said that in developing the four-story Abbot Buildings project he was aware Regency was dealing with “very special historic buildings, and we expect to be a positive long-term steward of both the physical assets and the important retail spaces they contain.”