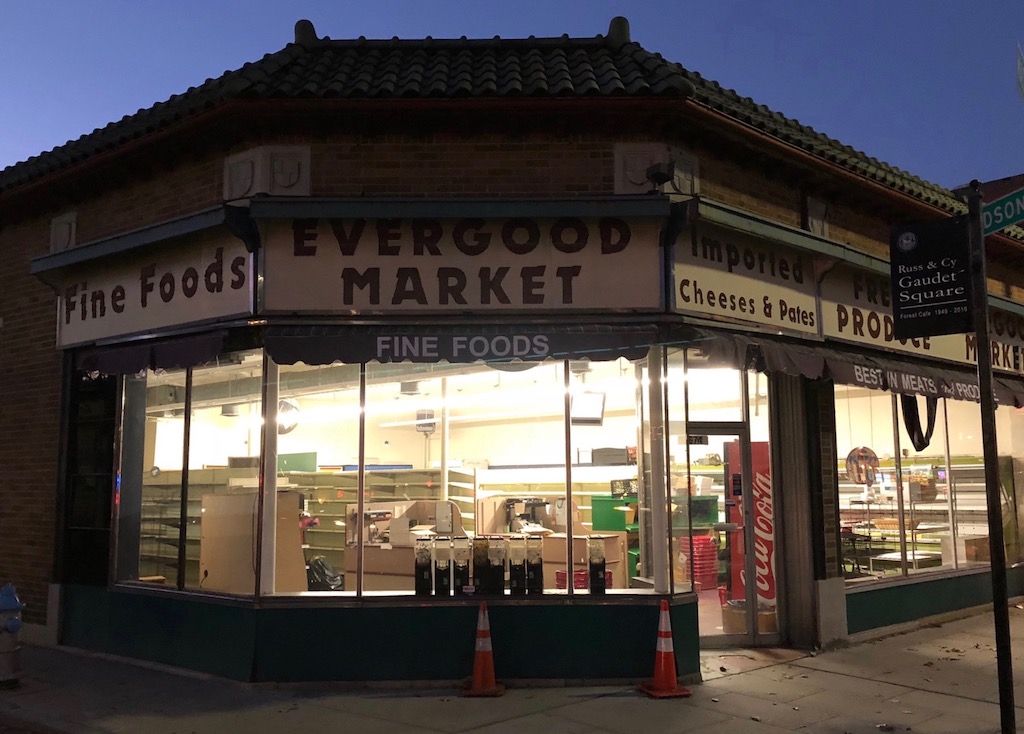 The storefront and fixtures at Evergood Market remain intact at 1676 Massachusetts Ave. nearly a year and a half after the store closed. (Photo: Tom Meek)

The Evergood Market space, empty for almost a year and a half on Massachusetts Avenue between Harvard and Porter squares, is being held so it can become another neighborhood grocery store, an owner said.

The 1676 Massachusetts Ave. property was not being actively marketed because Stone Investment Holdings is in negotiations with a butcher and grocer to occupy the space, but specifics couldn’t be given because terms and bank loans were all in flux, said Nancy Stone, one of the principals of Stone Holdings.

When asked about the fate of the property if the deal feel through, Stone said she was committed to bringing a similar business to the space – around 8,600 square feet between the ground floor and a basement.

Evergood shuttered in July 2016 after 67 years of operation, and residents of the Agassiz, North Commons, Radcliffe and Avon Hill neighborhoods have been wondering what will become of the space.

Residents have been frustrated by months of non-responses from the property owners and managers. Some who knew grocers interested in the space shortly after the store closed told identical stories of being stymied when attempting to make contact.

“The whole thing is indeed a mystery,” said Pattie Heyman, a Neighborhood 9 resident. “Why this store would be left almost a year and a half in the same condition with no cleaning up and a total eyesore is beyond my comprehension.”

Stone Holdings also owns nearby properties housing a Starbucks and the swank eatery Shepard. Marc Levin, part of the management team at Chestnut Hill Realty, acts as the leasing agent, but repeated inquiries as to the status of the property and its availability were ignored by Levin. His assistant said the property was not Chestnut Hill business and that Levin would need to respond to the query directly. (Initially the property’s availability was advertised in the window listed by UBA Realty, but eventually it came down. A call to UBA pointed Cambridge Day to Levin.)

The store’s founding family, the Scholnicks, sold the store 16 years ago to manager William R. Carr. Two years later, Carr died. His wife, Diana Carr, took over the store and its financial challenges, but aging equipment and deepening financial pressures took their toll, leading her to close the store.

The unchanged storefront and lingering fixtures inside serve as a reminder of the loss to the community. “As a regular customer I miss a grocery where I can pick up food to make dinner,” resident Sarah Block said.

The nearest grocery stores are Star Markets on Beacon Street in Somerville and in Porter Square.