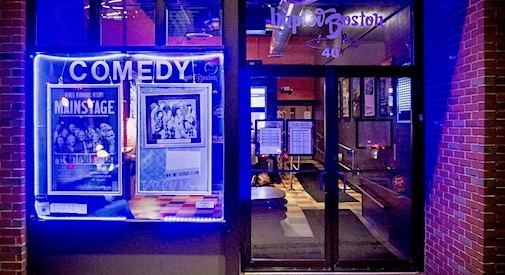 Sure, New Year’s Day is expected to hit a low of -1 degrees – but by then Cambridge and Somerville will already be acclimated to a seemingly relentless cold snap, and staying in would mean missing the sixth year of “100 First Jokes.” The tradition, held at the ImprovBoston comedy club in Central Square, brings at least 100 New England comics to the stage with less than 120 seconds each for their first new, never-before-told jokes of the year and has always sold out both New Year’s Day shows … weather be damned.

We talked with Dana Jay Bein, who’s produced the show every year until now, about how the event has evolved since its rollout in 2012. The conversation has been edited and condensed for publication.

We were inspired by a “50 First Jokes” based out of New York City in 2011 and thought we could do something similar for the Boston scene. We pulled the first event together in a couple of months. We didn’t set it out to be an annual thing, but the first was so fun and successful that we knew we had to keep doing it.

The comedians also a blast in the green room/holding area, so it became more than just shows – it’s also a party of sorts for 100-plus comedians.

How did the first event go? What lessons were learned?

We had two hosts onstage with a tech attempting to give a wrap-up light after 60 seconds. Those ideas proved to be clunky in the first run. In 2013, we began hosting from offstage and using a basketball scoreboard off to stage right so comics could keep their own time and the audiences could also hold them accountable. A loud, basketball-style buzzer goes off at 90 seconds now.

How do you pull together so many comics for a single event? How do you get them on and off the stage?

It’s actually fairly easy to get 100-plus comedians to do these shows; setting lineups and wrangling comedians on show night is where the headaches come in. Typically, the running order is randomized and posted around the theater and we queue up the comedians to the backstage door of the main theater in clusters of 10 or so to keep the flow to the stage accurate.

In the first few years, we’d have comedians not be in the right place in line or leave early or show up late, resulting in them being announced by the host and not appearing onstage. We’ve since added some volunteers who run between the hosts and the queues and the holding areas to make sure that any changes in the queue make it to the hosts.

Many comedians show up the night of hoping to get a spot, and we end up turning a lot of away. These shows are not open mics.

Why the handoff in organizers? What does this mean for the show this year and in the future?

I stepped down as producer because I’m trying to focus more on performing. It’s an exhausting but extremely rewarding show to produce and I have lots of great memories producing and hosting – but I will not miss booking it. Booking a show with 10 comedians can be tough; booking a show with more than 100 is psychotic. The show’s in good hands with David Thomas and Danielle Andruskiwec, seasoned stand-up producers with ties inside and outside of IB. I’m sure the show will carry on as a New Year’s Day tradition.

Audiences are told 100 or more brand-new, totally untested jokes. How do they tend to go over?

Some of the jokes hit and some don’t, but it doesn’t seem to matter to the audience, because they’re in on the gimmick. Some comedians tell a quick one-liner and leave; others use their entire 90 seconds. It’s really fascinating.

The “100 First Jokes” shows, hosted by Andruskiwec and Thomas, are at 7:30 and 9:30 p.m. Monday at ImprovBoston, 40 Prospect St., Central Square. Tickets are $10, and a complete (if tentative) list of performers is here.