In calling for a boycott of Hewlett-Packard, campaign evokes legacy of Polaroid victory 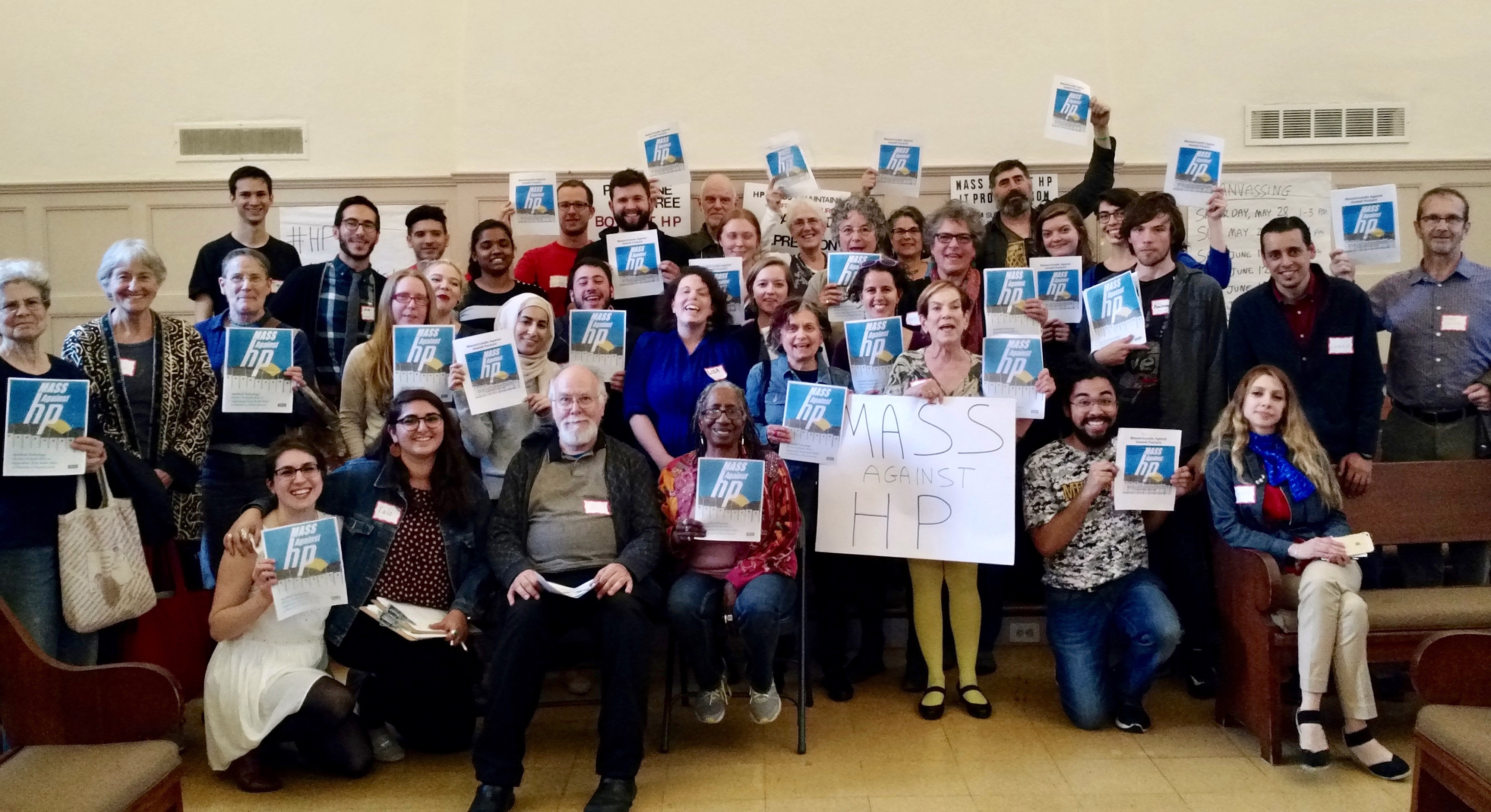 In calling for a boycott of Hewlett-Packard, campaign evokes legacy of Polaroid victory

Attendees of the May 18, 2016, launch of the group Massachusetts Against Hewlett Packard hold up copies of the group’s report on “Apartheid Technology.” (Photos: Eli Gerzon)

Over the past two years, the Cambridge-based human rights campaign Massachusetts Against Hewlett Packard has participated in what has become an international movement calling for a boycott of the technology company Hewlett-Packard.

Since 2008, HP has provided technology such as servers and computers to the Israeli government and military, which has used it to create a population registry for the Israeli occupation of Palestinian territories,” according to a report hosted on the MAHP website. The registry uses a biometric system and identification cards to monitor and restrict the movements and privileges of residents based on nationality, and acts as a “key partner in the continuation of the apartheid regime.”

“It allows them to really limit some people’s basic rights under the law,” said William Ruhm, a participant in the grassroots organization, which has no formal leadership positions or executive board.

“We’re the local component of an international push,” Ruhm said. “There’s probably a hundred of these campaigns going on around the world.” 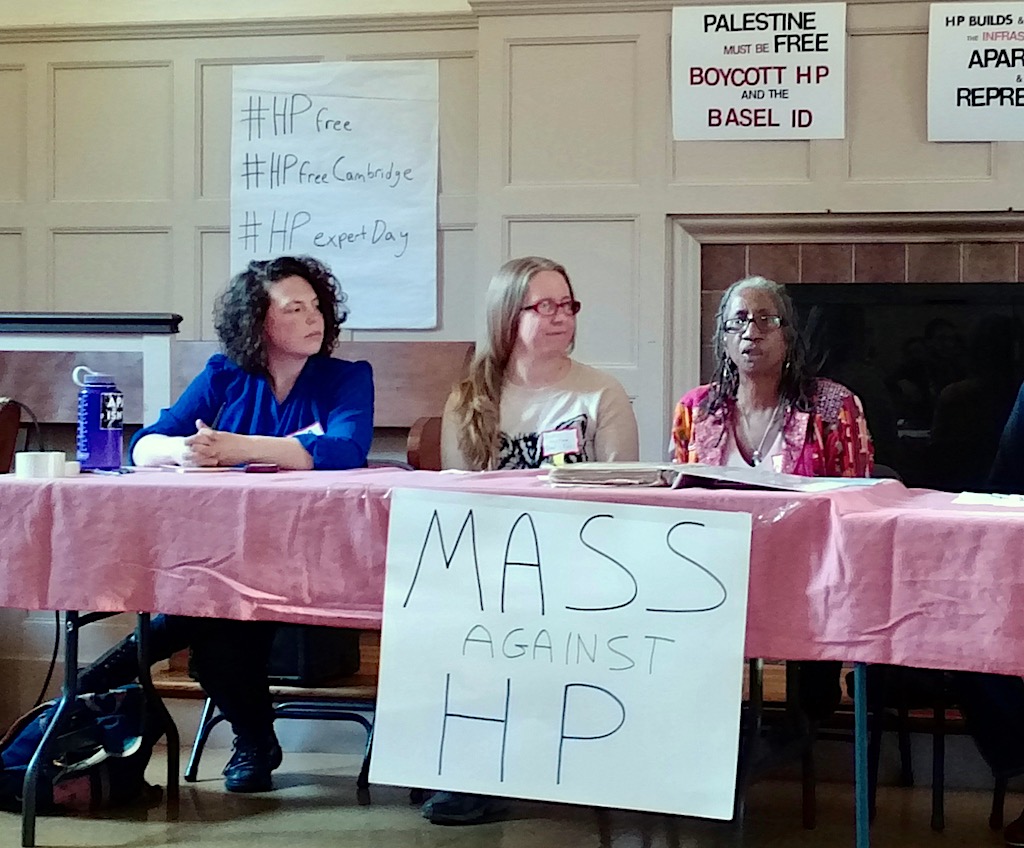 Liza Behrendt, Elizabeth Rucker and Caroline Hunter take part in the launch of Massachusetts Against Hewlett Packard, held at the Friends Meeting House in Cambridge.

The group is made up mostly of Cambridge locals and others from Greater Boston, and its presence in Cambridge is no accident. The boycott effort has added resonance here because it was the home of Polaroid – and of the activists who fought Polaroid’s technological collaboration with South Africa’s racist Apartheid regime in the 1970s. “Today, we have a chance to resist a modern Polaroid,” the group’s literature says.

When the group launched in May 2016, there was space at the table for Cambridge civil rights activist Caroline Hunter – who in 1970, as a new employee at Polaroid, spotted the company’s involvement in creating the Apartheid government’s notorious passbooks and alerted her co-workers. She and future husband Ken Williams lost their jobs but ultimately succeeded in shaming the company into abandoning its business with South Africa.

“If we could take down a billion-dollar corporation then, what do you think we can do today?” said Hunter, who became a teacher and administrator at Cambridge Rindge and Latin School, to an audience at the group’s first public event. “The people of Cambridge have spoken up before. We can and we will speak up again.”

Shape of the campaign

The main goal of the campaign is to get the City of Cambridge to remove HP from its vendor list, starting with the City Council passing a resolution in support.

“It’s a pretty simple ask … From now on when you need to replace any sort of technology, buy from anyone except HP,” Ruhm said. “We try to make enough of a dent in that company’s profit margin, their public image, so that they’ll stop providing the goods [to Israel’s government].”

MAHP receives $1,000 per year from Jewish Voice for Peace, and uses this funding to pay for campaign costs and carry out awareness-raising demonstrations and community outreach programs, such as the Feb. 3 screening of the 2012 film “Roadmap to Apartheid,” set to take place at the Cambridge Friends Meeting House.

The severing of ties between HP and the Israeli government is overdue, the group says.

In addition to the efforts of MAHP, student governments at academic institutions such as Tufts University and the University of Michigan have called on their administrators to stop doing business with the technology company. Other institutions have also taken notice. The Presbyterian Church divested from HP in 2015.

The group thinks the backlash has had an effect. The company – which in 2015 split to serve consumers separately from corporations and governments – has scaled back involvement with the Israeli government, discontinuing the distribution and management of information technology infrastructure and servers for the military and ceasing work on the population registry, according to MAHP materials.

But it continues to supply computers and hardware, and has made no promises about the future, the group says. As a result, MAHP and others continue the boycott.

In a response Tuesday, the company cited its high ranking for corporate citizenship among the 500 S&P index companies.

“HP has been strongly committed to socially responsible business practices throughout its 75-year history. We abide by a strong human rights policy and adhere to the highest standards of human rights requirements in every market in which we operate,” said Dana Lengkeek, a communications executive for the company. “It is not our policy to take sides in political disputes between countries or regions. We focus on making the best products we can to help improve the lives of people around the world.”