Students seek more action on diverse hiring, and a chance to school their teachers on race 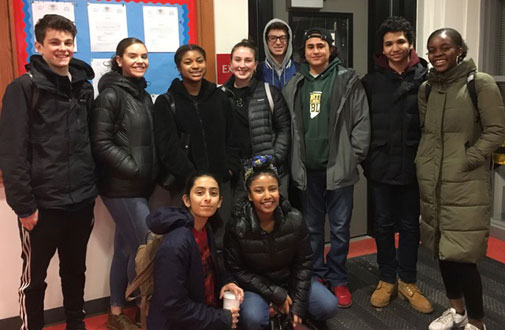 Students seek more action on diverse hiring, and a chance to school their teachers on race

Ten high school students from the Cambridge Youth Council demanded more action on hiring and support of black teachers before the School Committee on Tuesday.

A specific request is that the district’s new diversity director, Ramon De Jesus, go to recruitment fairs and “actively” try to hire black educators. In School Committee discussions in past years about hiring of teachers of color, there have been varied reports on the amount of outreach Cambridge makes, including at job fairs focused on candidates of color.

The students also had requests related to a school-based subcommittee addressing race issues that they said was developed at Cambridge Rindge and Latin School in response to the Black Student Union videos on microaggressions. Aubourg asked that they be involved: “To be transparent, CYC is willing to work with subcommittee members and the diversity director to maintain the student voice throughout the process.”

This subcommittee, Woldeyonas said, should develop a plan “to ensure a robust change to create a welcoming environment for black students and black teachers.”

The students’ requests were supported by the high school’s assistant principal, Robert Tynes, and its four deans, Marseille said. The students would also like to implement “as a policy” bimonthly teacher workshops led by students on anti-racist education. These sessions, Marseille said, “would be beneficial for all teachers” – white and of color – to attend.

“This would require money,” Aubourg said. Calling it “an investment for all black students,” she suggested that quick action is needed to meet this year’s spring budgeting deadline.

As food for thought, Aubourg said that studies have shown “that black students are 45 percent more likely to attend college if they have are taught by black teachers.” Although the source of those data hasn’t been identified, a recent study from the Institute of Labor Economics, while not showing a 45 percent impact, does cite significant statistics showing black students are more likely to perform well, stay in school and go to college with even a single black teacher. For black students in the study, having at least one black teacher in third through fifth grades reduced their likelihood of dropping out of school by 29 percent; for very low-income black boys, it went to 39 percent.

In the last school year, 61 percent of Cambridge’s public-school student body were nonwhite, while 22 percent of the teachers were nonwhite. Thirty percent of the high school’s 2,000 students were African-American. The district has had a goal of 30 percent nonwhite teachers for several years without much progress: the rate hovers between 18 and 22 percent. Even at 22 percent, though, Cambridge has the second-most diverse teacher body in the state, behind Boston at 41 percent. The state average for public schools is 8 percent. (These do not include charter schools, many of which have levels above Cambridge’s.) Last year several key teachers of color left CRLS, with some saying the district had failed to provide adequate support to them or to their students of color.

Superintendent Kenneth Salim has renewed a district commitment to improving the hiring and retention of teachers of color. Getting to 30 percent nonwhite teacher levels is one of seven goals in his three-year plan to implement a new District Framework. Salim has created a “Dynamic Diversity program” to recruit, hire and retain a diverse workforce, including creating the diversity director position.

The council is a youth civic organization working as part of the Cambridge Family Policy Council. They are a diverse group of teenagers selected through application. A student-led organization with an adult adviser, they do a variety of work across the city and schools to addressing opportunity gaps in middle and high school. The students get a stipend or credit toward community service graduation requirements. In addition, the Youth Council annually sends a Youth Delegation to the National League of Cities Conference.