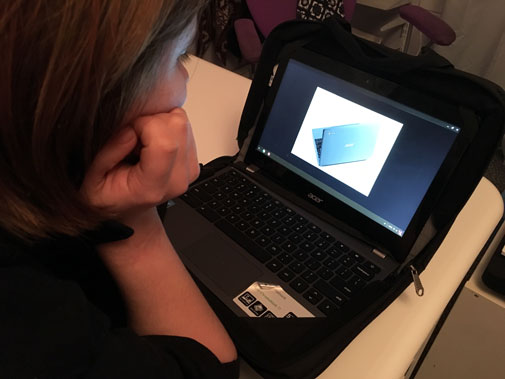 The 1:1 Chromebook initiative at Cambridge Rindge and Latin School plans to get one of the devices into the hands of every student. (Photo: Jean Cummings)

The free Chromebooks relied on by the city’s high school students may not be perfect, but fears that a lack of Internet access make the laptops useless to some students are overblown, Cambridge Rindge and Latin School officials say.

At the beginning of this school year, Cambridge Public Schools distributed 1,100 Chromebook laptops among 460 first-year students at Cambridge Rindge and Latin School and 21 classrooms. Using a Chromebook to its full capacity means using the Internet – getting homework assignments through the Web on Google Classroom, submitting them through Google Drive, getting comments back on Google Docs and talking with teachers on Gmail.

“All the apps that run on those laptops run within the context of an Internet browser,” councillor Quinton Zondervan said at the Feb. 12 meeting of the City Council. “If kids don’t have access to Internet at home, they can’t do their homework at home.”

Zondervan framed the issue in terms of recent Census data showing 95 percent of high-income households in Cambridge have access to broadband Internet, but only 50 to 60 percent of low-income homes.

“This is a major equity issue in our city,” Zondervan said.

The 1:1 Chromebook initiative – which is intended to provide laptops to every student – was designed with disparate access to Internet in mind, school officials said.

“We put in a contingency plan to address those issues – meeting with students, talking about solutions like Comcast Internet Essentials, and we’ve purchased a pool of mobile hot spots that we can assign,” said Gina Roughton, assistant director of educational technology at CRLS.

Comcast says its Internet Essentials program offers low-cost Internet and discounted computer equipment to families who have at least one child eligible for free school lunch.

Worrying that many homes in Cambridge lack good access to Internet, the school also surveyed students to hear concerns about the Chromebooks.

“The questions there were ‘Do you feel you have any concerns about using the Chromebook outside of school to support your learning? Internet access?’” Roughton said. “Only one student of all freshmen indicated that they had a concern about Internet access at home.”

The 1:1 program is in its first year. The school hopes to learn more about students’ experiences with it, including equity issues. Guidance counselors are a likely place where those conversations would take place, and teachers might already spot a problem if homework isn’t coming in, Roughton said. Student government is another place she said there could be more sharing of information.

“This is our pilot. We didn’t go all in with the entire high school so we could learn these lessons and learn how to change our practices to make sure it’s the best model for everyone involved,” she said.

Students expressed appreciation of the Chromebooks, but said the devices had limitations even when there’s good access to Wi-Fi at home.

“The only thing that’s annoying is that they don’t work without Wi-Fi. Sometimes I’ll be in a café and I’ll want to do homework and it’s difficult to use the computer,” Anais Stupka said.

“There are some times at home when the Wi-Fi stops working, so then I just do it on paper and hope that it works, or I do it at lunch,” said Victoria Heitzmann, another first-year student.

Lack of access at Cambridge Rindge and Latin School itself has been cited as a problem by students using the Fitzgerald Auditorium or basement arts, music and dance spaces. Internet can also cut in and out in the school’s four-story main building.

The Chromebooks were issued after one meeting at the beginning of the school year that left little awareness of the school’s contingency plans, Stupka said.

“I think they work really well. They’re really helpful,” she said. “I haven’t heard anything about mobile Wi-Fi hot spots.”

“That still requires students to identify that they have this problem, bring it to somebody’s attention, and say, ‘I don’t know if my access at home is good enough, could I get a hot spot?’” Zondervan said in an interview.

An additional concern: The Comcast Internet Essentials program operates at 15 Mbps, a speed right in the middle of the 5 to 25 Mbps the Federal Communications Commission believes students need – and it expired formally in 2014, Zondervan said. The company provides it on a volunteer basis, which leaves the program susceptible to cancellation at any time.