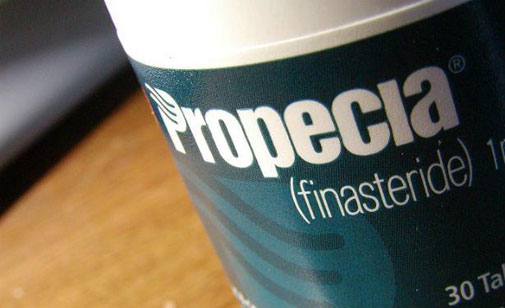 Finasteride, the generic version of the Merck prostate drug Proscar (and related to the hair-loss drug Propecia) is the subject of lawsuits over side effects.

In a case involving a Cambridge man, the Supreme Judicial Court opened the door Friday for Massachusetts patients to win damages for harm from generic drugs, something that until now was virtually impossible nationwide. The ruling allows patients to hold brand-name drugmakers responsible for injury from inadequate labeling on the generic version of the drug, under certain circumstances.

The court imposed a demanding standard for plaintiffs: They must prove that the brand-name manufacturer intentionally failed to warn patients of side effects that could cause death or “serious bodily injury.”

And technically, the plaintiff, Brian Rafferty of Cambridge, lost the case, but the SJC will allow him to amend his complaint to take advantage of the new opportunity. His attorney, Emily E. Smith-Lee, didn’t respond immediately to a message left at her office in Sharon.

The ruling makes Massachusetts one of the few states, if any, where patients can sue over labeling on a generic drug. That is because generic drugmakers satisfy federal labeling requirements as long as they copy the label on the brand-name drug; they don’t have to determine hazards independently and actually can’t change the generic label on their own. Patients who claim injury because the label warnings fall short can’t sue generic drug manufacturers under federal law, and the U.S. Supreme Court had ruled that federal law preempted state lawsuits.

Rafferty sued Merck & Co. in Middlesex Superior Court in 2013. Rafferty alleged that his urologist prescribed finasteride, the generic version of the Merck drug Proscar, in 2010 for an enlarged prostate. According to the suit, Rafferty soon developed “sexual dysfunction,” including erectile dysfunction and testosterone deficiency, side effects that were included on the drug label. But – contrary to the label – the symptoms persisted after he stopped taking the drug two months later, and he was still being treated for them when he filed the lawsuit.

The suit said that after reports that patients had continued to experience sexual dysfunction after getting off Proscar, Merck changed the drug label in Sweden, Britain and Italy to include that statement, all before Rafferty started taking the generic version in August 2010. Merck didn’t change the U.S. label unti1 2012; therefore finasteride did not include those warnings on its label when Rafferty was taking it. According to the suit, Merck should be held responsible for flaws in the finasteride label because it alone controlled what was on the label.

Merck responded that it bore no responsibility for injury from a drug made by another company. That answer has protected the company in similar suits, though there is also a class action against Merck because of the persistent side effects of Proscar and Propecia that does not include the generic.

Merck spokeswoman Claire Gillespie noted in an emailed statement that the court rejected Rafferty’s claim of negligence and a second claim that the company had violated the state consumer protection law. Gillespie said the company “is disappointed” that the SJC allowed “a limited course of action in which a plaintiff may pursue a common-law recklessness claim against the brand-name manufacturer [of a generic drug] if it intentionally failed to update the label on its drug, knowing or having reason to know of an unreasonable risk of death or grave bodily injury associated with its use. “

“Merck appreciates the court’s careful analysis,” Gillespie said. She added that Merck “stands behind Proscar” and said “nothing is more important to Merck than the safety of our medicines and the people who use them.”

Duty not to harm

The SJC cited “public policy” in ruling that brand-name drugmakers could be held responsible for flaws in the labeling on generic versions of their drugs, saying “there is a certain core duty – a certain irreducible minimum duty of care, owed to all persons – that as a matter of public policy cannot be abrogated: that is, the duty not to intentionally or recklessly cause harm to others.”

“The widespread use of generic drugs means that, if we decline to impose any liability on brand-name manufacturers, countless consumers would be left without a remedy,” the ruling said.

Still, the court limited the ability to sue because of worries that the additional liability might delay or prevent companies from developing new drugs, it said. So patients must do more than accuse brand-name drug manufacturers of “general negligence”; they must show that a company recklessly failed to warn patients adequately, the ruling said.

The court acknowledged that “we find ourselves in the minority of courts that have decided this issue. We also are the only court to limit the scope of liability arising under this duty to reckless disregard of the risk of death or grave bodily injury.”

“Implicit in both our common and statutory law … is a longstanding public policy that, although we may be willing in certain circumstances to excuse ordinary negligence, we will not tolerate the reckless disregard of the safety of others,” the court said.

Recklessness includes “cases where, for instance, a brand-name manufacturer learns that its drug is repeatedly causing death or serious injury, or causes birth defects when used by pregnant mothers, and still fails to warn consumers of this danger,”  the ruling said.

Rafferty originally included the urologist who prescribed finasteride in his suit, but later dropped the doctor from his complaint.

This post was updated March 18, 2018, with excerpts from an emailed statement by Merck spokeswoman Claire Gillespie.