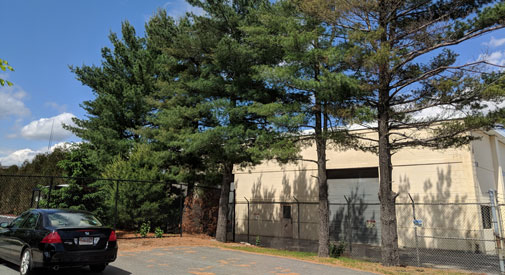 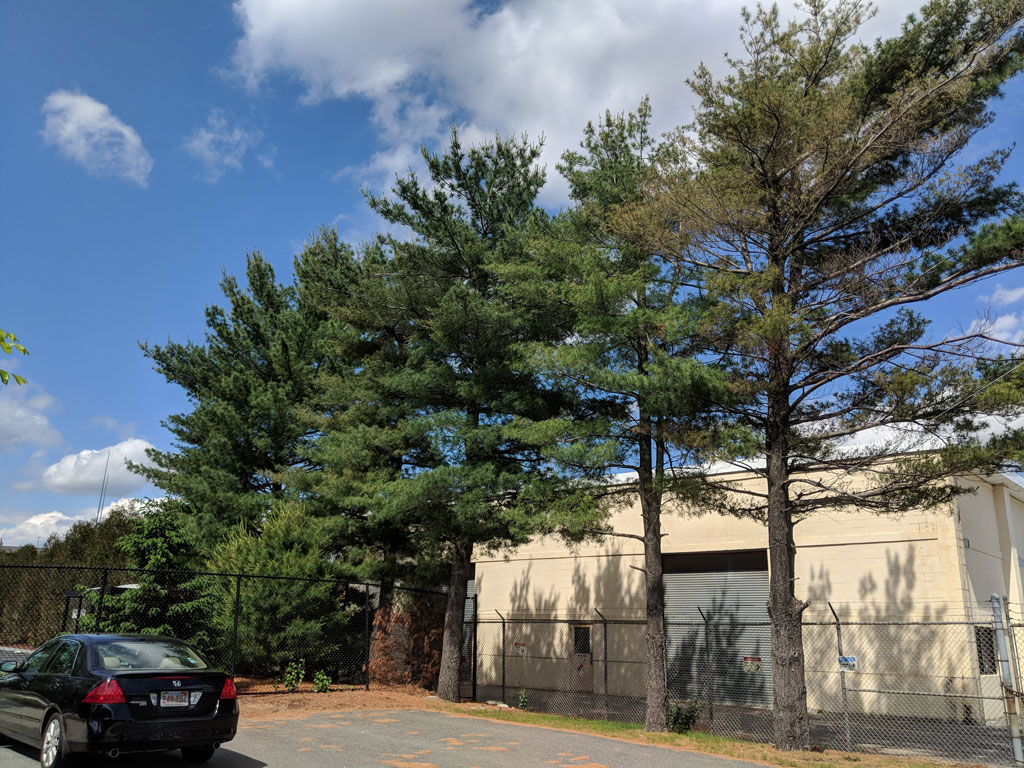 Some of the 200 mature trees slated to be cut down for the redevelopment of the former Abt Associates building behind Trader Joe’s in Fresh Pond. (Photo: Charles Teague)

The relentless war on trees rages on in Cambridge. In addition to the hundreds of trees already cut down this year, another 200 mature trees will be cut down for the redevelopment of the former Abt Associates building behind Trader Joe’s in Fresh Pond. Corporations, not homeowners, cut down 50 trees in 10 days this April. Hundreds more were cut down in February by the railroad, with 60 stumps visible outbound from Porter Square.

Currently our Tree Ordinance requires only an “inch-for-inch diameter” replacement, only for trees bigger than 8 inches in diameter and only for new construction larger than a 20-unit apartment building. Specifically, a 10-inch diameter tree is “replaced” by five 2-inch saplings. Anyone looking at a mature tree knows this is ridiculous. Everyone knows young saplings aren’t replacing any sizable tree for many years to come – that is, if the saplings survive.

The Boston Globe describes how Boston’s failed sapling planting program was enacted instead of “maintaining its stock of older trees, which absorb more carbon dioxide, provide more shade and do more to reduce flooding” – even though Boston’s environmental chief says, “We know that mature trees contribute far more to our canopy than new trees.”

What can you do? Tell your city councillors to fix our ridiculous Tree Ordinance right now by requiring 10-inches of saplings for every 1 inch of trees cut down; and require the use of tree cutting permits to make it harder for corporations to cut down trees.

In any case, go to some of this week’s tree meetings:

Tuesday, 6 p.m., in the  media library of Cambridge Rindge and Latin School, 459 Broadway: the first meeting of the “tree task force.”

Wednesday, 7 p.m., in Room 2-150 of Lesley University’s Hall, 1815 Massachusetts Ave., Porter Square: Trees will be an integral part of the presentation of “The Great Swap Legacy” covering the area surrounding the Abt redevelopment where another 200 trees will be cut down.

Thursday, 5 p.m. on the steps of City Hall: “Rally to Preserve our Tree Canopy” to convince our councillors to vote for interim tree protections on Monday while the “tree task force” deliberates for the next year.

Charles Teague is a North Cambridge resident who caught W.R. Grace cutting down a tree in the public Linear Park, with the company having to fund three replacement trees. He also doubled the number of replacement Linear Park trees as part of the Dick’s Auto Body redevelopment permitting process and had the Cambridge Lumber redevelopment redesign its Linear Park boundary. Send email to [email protected].