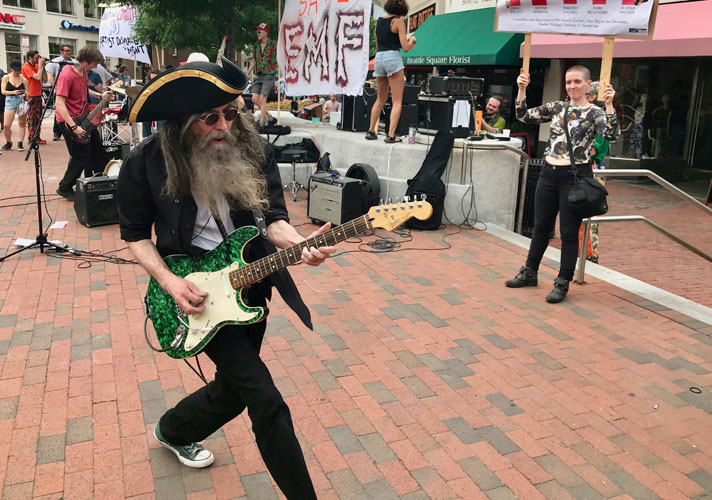 Ben Simon and Sophia Belle prepare to post artists’ demands of developer John DiGiovanni at the door to his Church Street offices during a protest held Saturday in Harvard Square. (Photo: marc Levy)

The biggest crowds Saturday at Make Music Harvard Square/Fete de la Musique in Harvard Square were gathered around a spectacle that wasn’t part of the event: a two-hour protest of the developer who shut down the EMF Building near Central Square, throwing 200-plus artists and musicians out of their affordable studios and rehearsal spaces.

The developer, John DiGiovanni, was nowhere in sight, and nor were officials of the Harvard Square Business Association that sponsors the annual Make Music Harvard Square/Fete de la Musique and retains DiGiovanni as its board president. But along with a half-dozen bands, speeches and colorful signs were other prominent Cantabrigians: state Rep. Mike Connolly, city councillor Quinton Zondervan and Suzanne Preston Blier of the Harvard Square Neighborhood Association, as well as a number of artists who have stood up to lead the fight against development that serves to crush the city’s creativity and affordability.

“John DiGiovanni has essentially destroyed a large chunk of the artistic community,” protest co-organizer Sophia Belle told the gathered crowd of several dozen people in the brick plaza of Brattle Square, describing steps taken to try to stop and reverse the closing of the building. “We have gathered here today to reiterate the massive loss we feel from the destruction of EMF. This is the heart of the issue: The fabric and the landscape of this city is being … decided by a small group of wealthy individuals.”

Among the speakers was state Rep. Mike Connolly, who spoke against “real estate speculation” harmful to the community.

The Sound Down Cellar performs Saturday at the protest.

Jobe Freeman uses his set to lead the audience in a sing-along of the 1931 protest anthem “Which Side Are You On?”

EMF Building protesters gathered signatures on a petition during the rally.

Jarva Town sings a solo song as the two-hour protest nears its end in Brattle Square, a plaza in Harvard Square.

Among the signs displayed during the EMF protest was one with a simple message made during the protest itself.

BABAM, or the Boston Area Brigade of Activist Musicians, brings the Brattle Square protest to a close.

“It has been made exceedingly clear to us that DiGiovanni, like most developers, is not interested in listening to the voices of the community,” Belle said. “The Harvard Square Business Association and DiGiovanni say they support democracy, but this is not democracy.”

Event co-organizer Ben Simon sang a song written for the protest called “This City Is Not a Dormitory,” during which he lamented that “I can’t afford to live in the town I was born” and made an observation that drew applause from the crowd: “The markets are free / the people are not.”

In the run-up to the EMF protest, business association executive director Denise Jillson issued a statement saying that, though she felt DiGiovanni’s private business as a developer in Central Square was being unfairly conflated with the association’s work, the square welcomed the action because it is “is known as a place of celebrations and protest, where public discourse is encouraged and welcomed.”

But there’s another reason the business association was smart to welcome the protesters: Without them, its Make Music Harvard Square/Fete de la Musique would have been even more lackluster. The roster of performers was down by about half from last year – to some three dozen acts from 75 – on six stages instead of 11. The association was slow in posting official schedules and promoting the event, which may have added to an audience drain.

After the protest and performances on Brattle Square, artists invited the crowd to follow them to DiGiovanni’s offices on Church Street, from where he runs Trinity Property Management, so they tape could tape up copies of their demands: That he sell the EMF Building to the city, which considered a long-term lease of the building as arts space but backed away when seeing the extent of repairs that would be needed; refund 12 months’ of rent collected from tenants when DiGiovanni called the building “unsafe” and “inappropriate for any use”; and step down from leadership of the Harvard Square Business Association.

After the demands were posted, the protest and performers headed on to Cambridge Common for a dance party.

Zondervan said his connection with the now-closed EMF Building was an immediate one – while his daughter was taking singing lessons, he went to an EMF musician for his own drumming lessons – and Connolly shared a story about riding the train in from public housing in Norwood as a boy to enjoy Central and Harvard squares. “Here we had culture, we had diversity, we had vibrant community. And that community is because of the people … and we’re losing that,” he said. “The reason we’re losing it is real estate speculation like Mr. John P. DiGiovanni is doing right now with the EMF Building.”

Connolly – who also had an EMF Building connection in that he went several times as a guest when the WEMF radio station had studios inside – asked what good Central Square’s Cultural District designation would be if “the 99 percent of us who want to enjoy it can’t afford to live or play in our community?”

This post was updated June 18, 2018, with added or corrected band names and the removal of out-of-date information about a tenant demanding to go through the eviction process at the EMF Building.