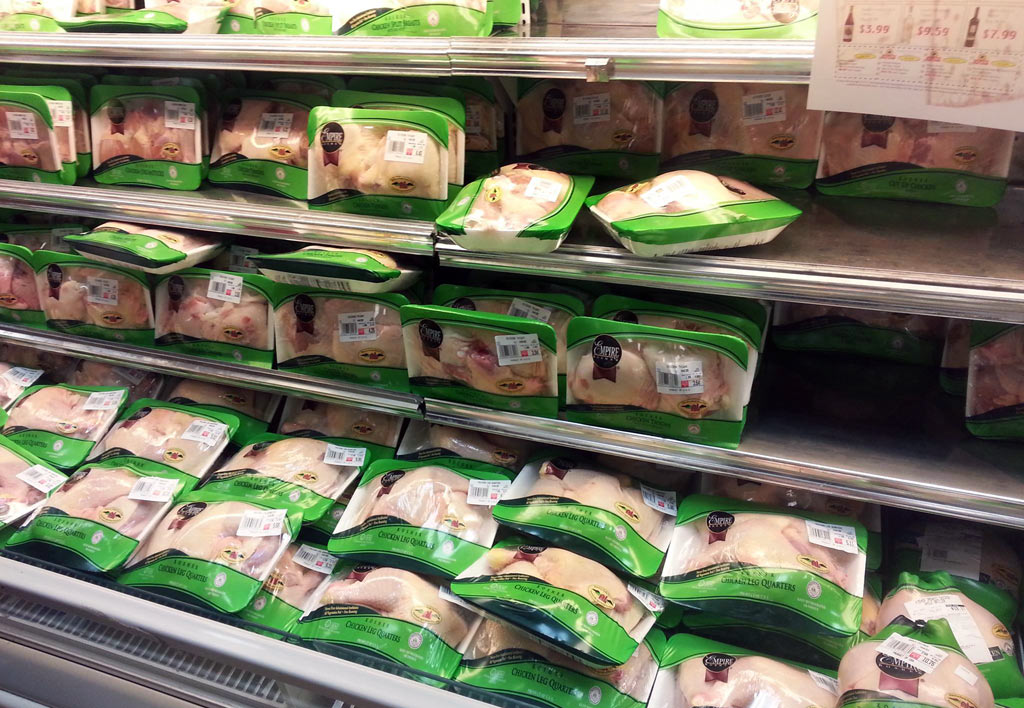 Some consumer groups are questioning why two federal agencies that oversee food safety alerted the public last week and this week about kosher chicken linked to a salmonella outbreak that has caused one death and 17 illnesses so far, but did not advise buyers to throw out Empire kosher chicken implicated in the outbreak.

Whole Foods Market carries Empire Kosher Poultry’s Kosher Valley brand, and the product was in the refrigerated poultry case at the River Street store on Wednesday, several days after the first alert Aug. 24. A manager said Wednesday that the store subscribes to a service that notifies food retailers about recalls. Without a recall, the manager said, store employees wouldn’t remove any products. There was no Empire chicken in the case on Thursday and Friday.

The Whole Foods press office didn’t respond to a message left Friday asking whether the company still carried Empire chicken and what the company’s policy was in response to public health alerts. There are three Whole Foods stores in Cambridge.

The alerts from the U.S. Centers for Disease Control and Prevention and the Agriculture Department’s Food Safety and Inspection Service concerned raw Empire kosher chicken sold between September 2017 and June 2018; there were no allegations that Empire chicken currently being sold was contaminated with salmonella and had caused illness. But the agencies said they are still investigating, and CDC says on its website that salmonella illnesses can take considerable time to be reported.

The people who became ill live in New York, Maryland, Pennsylvania and Virginia.

It’s likely that most or all of the suspect chicken was cooked and eaten well before the alert was issued this month, but FSIS said it was notifying consumers because it was “concerned” that some people still had potentially contaminated chicken in their freezers.

Statements by Consumer Reports and the Consumer Federation of America’s Food Safety Institute said the strain of salmonella identified in the outbreak was especially virulent, noting that eight of the 17 victims reported so far were sick enough to need hospitalization, and that one person died. The federal agencies should have recommended that consumers throw away chicken bought between last September and this June that was still in home freezers, the organizations said; Consumer Reports did recommend that.

Instead, the agencies said they were not advising people to avoid eating the chicken. The FSIS press release about the alert included a phone number for Empire, where a recorded message said the product was “perfectly safe” as long as it was cooked thoroughly and handled properly.

“This chicken is not perfectly safe,” said Thomas Gremillion, director of the Food Policy Institute. “Unfortunately, federal food safety protections for consumers have not kept up with the times.” Gremillion noted that FSIS cannot order a recall but can ask a company to initiate one. If the company refuses, the agency can declare a product “adulterated” and seize it, but only with overwhelming evidence.

In this case, the agencies said the strain of salmonella that caused the outbreak was found at two chicken processors, one an Empire plant, and that many people who became ill had recalled eating Empire kosher chicken – but the agencies did not report connecting individual victims to specific samples of Empire chicken, presumably uneaten. Gremillion called that “an impossible standard.”

A spokeswoman for Empire, the largest U.S. kosher poultry processor, said the company was “shocked and saddened to have just learned that there may have been a death potentially related to a salmonella outbreak, and we extend our sympathies to anyone affected.”

Empire has “no data that connects this tragic event to our products” and is cooperating with government investigators, she said. “We take food safety and the health of our customers very seriously.”

Asked why there had not been a recall, an FSIS spokesman said there were “many steps” to identifying and investigating an outbreak and “these steps all take time.” Because of the potential danger from frozen Empire chicken potentially linked to the outbreak, FSIS issued the alert “out of an abundance of caution,” she said.

CDC spokeswoman Brittany Behm said the agency didn’t advise consumers to throw away potentially contaminated chicken because “there are steps that can be taken to make the product safe to eat.” She added that “people can certainly make individual decisions” about whether to eat the chicken.

Salmonella bacteria are common in poultry products. Symptoms usually develop in 12 to 72 hours and include diarrhea, fever, vomiting and abdominal pain. Food safety experts advise people to cook chicken to an internal temperature of 165 degrees Fahrenheit; wash their hands after handling raw chicken; wash thoroughly the counters, utensils and cutting boards used to prepare chicken; avoid using the same boards for cooked products and vegetables; and refrain from washing chicken in the sink, where contaminated water can splash onto other surfaces.