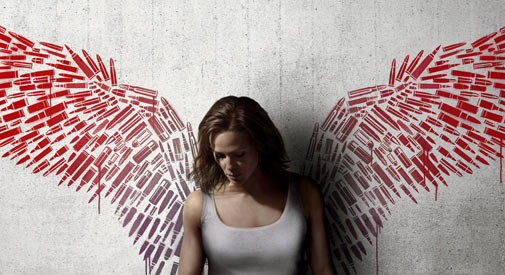 There’s nothing minty or fresh to “Peppermint,” the hard-boiled throwback from Pierre Morel who covered similar terrain with “Taken” back in 2008. That psychological actioner starring Liam Neeson as a relentless pa out to reclaim his daughter from kidnappers proved a surprisingly effective B-grade thriller. Here, unfortunately, the amiable Jennifer Garner spreading her wings as an avenging angel has a lot less to work with in terms of nuance and character, though the film far exceeds “Taken” in brutality and head count. Comparisons to “Old Boy” or “John Wick” would be fair. 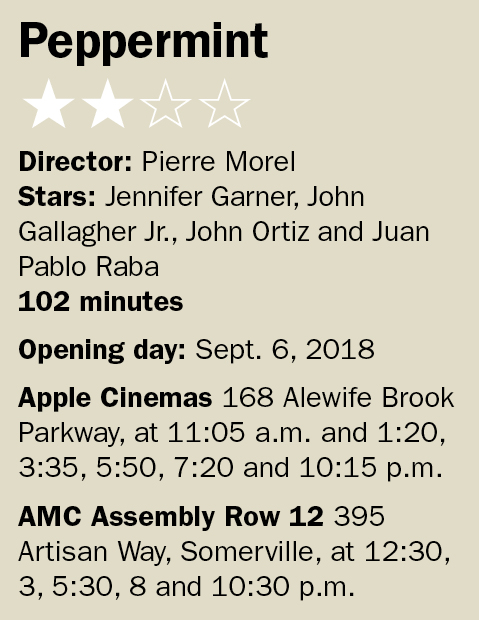 The film begins accordingly with a bloody struggle inside a boxy sedan in predawn Los Angeles. In those tight confines, Garner’s Riley North eventually gains the upper hand and lets a bullet fly into the cranium of a highly tatted gangbanger. The thing you admire most about the whole affair and its aftermath is Riley’s steely resolve and professional efficiency. You know she’s done this before. The how and why of that get answered quickly as we flash back five years, with Riley now a Girl Scout-leading soccer mom. Things are pretty tight for the Norths: Riley works part time in a bank while her loving yet flawed husband Chris (Jeffery Hephner) labors in a garage while figuring out his next big move. Unwisely, he listens (just listens) to an offer to be part of a crew to rob a drug lord by the fantastically generic name of Diego Garcia (Juan Pablo Raba), who, as the film says over and over, is the Mr. Big of the L.A. crime scene. The offer gets turned down, but Garcia’s already caught wind of the job and takes out Chris and Riley’s 9-year-old daughter (Cailey Fleming) in a drive-by. Riley sees the whole ordeal – in repeat slow-mo – and even though she IDs the shooters to the police, once in court, the defense attorney smugly flips the case. The judge won’t listen to Riley’s plea and the prosecutors don’t seem to care. The shooter goes free. An enraged Riley is cuffed, dragged out of court and prepped for a mental institution.

No, Riley doesn’t end up the caged tigress in an institution like Linda Hamilton in “T2.” With a smart repurposing of a fire extinguisher she breaks out of the ambulance en route and hies it overseas, where in slim imagery we learn she’s become something of a formidable pit fighter à la Jason Bourne and picked up plenty of other lethal skills that allot Garner the opportunity to reprise her Sydney Bristow ferocity on the big screen. It’s the film’s best move, but not enough to stem the kludgey, pat banality of the artless script.

For folks who enjoy long, slow beatdowns (think “John Wick” or “Kill Bill”), the revenge agenda’s a fairly long one. Garcia’s got an endless supply of heavily tattooed henchmen, and myriad hideouts for Riley to burn down. There’s a lot to do in a short time. It’s such a grueling affair you begging to feel exhausted as you watch Riley, smeared in blood, sweat and grime, gimp back to her Skid Row hideout with just enough time to stitch up and reload before moving onto the next bloody incursion. Like Charles Bronson’s vigilante in “Death Wish,” Riley becomes something of a (social) media sensation. The crime rate in L.A. dips too, but the director and writer don’t really do anything with that revelation the way smarter movies such as “Death Wish,” “Dirty Harry” and “Robocop” uncorked it for social commentary.

Probably the most political aspect of the film is the kindling it ignites for Trump’s border wall. The Latinos depicted here are stock brutes, mean torturous killers without a soul. You can imagine our fair president catching a matinee over the weekend and tweeting, “Very good movie. It tells the truth. More need now to build the wall. Screening to be held on White House lawn for Congress. Free covfefe for all!”