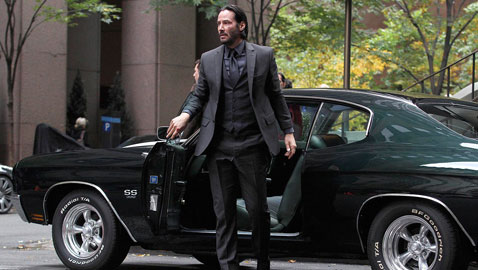 “John Wick,” the movie made by two stuntmen newly taking up the director’s chair (David Leitch, who’s been Brad Pitt’s stunt double throughout the years, and Chad Stahelski), plays it straight up, chin out and no punches pulled. You could call it a character study of sorts, though the character in question is pretty thin – which is not to say he’s not interesting in a kick-ass kind of way. Keanu Reeves stars as the hitman of the title, one with an impeccable reputation for getting a dirty job done who exited the game when he met the right woman. 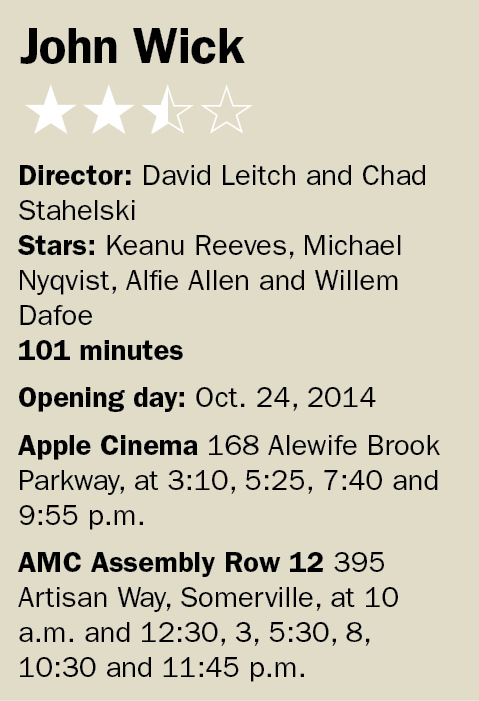 When we catch up with Mr. Wick, he’s just lost his wife and gotten a beagle puppy to fill the emotional void.  He lives in some pretty impressive digs in Northern New Jersey and has a thing for vintage muscle cars. It’s one of Wick’s purring icons of American automotive might from the emission-control-free era that draws the attention of Iosef, a Russian mafioso punk (Alfie Allen, from “Game of Thrones”) who, in the process of home invading and carjacking Wick, offs the yipping pup. Of course Iosef and his lot make the mistake of leaving Wick alive and, unbeknownst to them, it was Wick’s gun that put Iosef’s pa, Viggo Tarasov (Michael Nyqvist, from the Swedish version of “The Girl with the Dragon Tattoo”) on top. There’s some attempt to make amends, but Wick has none of it, so between employer and former employee the gloves come off. It’s a grudge match Viggo does not relish, explaining to his sniveling son while knocking back a stiff vodka that “Wick is the guy you call to kill the bogeyman.”

Wick proves more than worthy of his reputation, taking out a commando hit squad in short order and stealthily relieving lower-level henchmen of their posts and their lives with barely a bead of sweat. But through it all Reeves doesn’t quite feel tenacious or mean enough to fill such big, blood-soaked shoes. Kinetically charged gunplay and bone-rattling fight choreography nears the John Woo level, but it’s not in his sphere. In fact, the film feels a lot like “Bullet to the Head,” the recent Walter Hill flick starring a revenge-thirsty Sylvester Stallone – which should never be confused with Woo’s blunt and brutal 1990 Chinese version of “The Deer Hunter,” “Bullet in the Head.”

Likable stars including Willem Dafoe and John Leguizamo pop up in toss-away roles, and the film even boasts the Allstate “mayhem” man, Dean Winters (also in a tepid stand-around-and-mug-the-camera-for-a-few-minutes appearance). The cinematography by Jonathan Sela, who’s done the recent “Die Hard” flick and “Omen” remake, is rendered with tight, dark slickness and goes a long way. So does the novel convention of a hit-free hotel, The Continental, where hitmen come for a pampered safe haven when on the clock.

Overall, “Wick” is a whimsical, but satisfying  shoot-’em-up. Not all of the bullets hit the mark, but that’s not really the  point.