Comedy Studio relaunches in Union Square, home at last after 21 years as guests in an attic 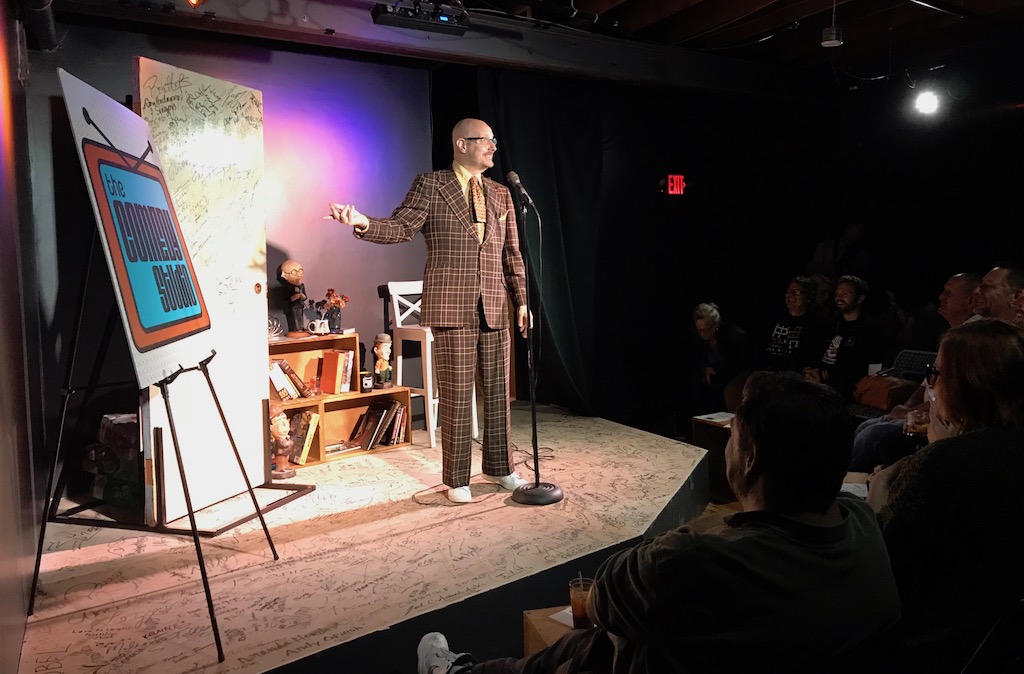 Comedy Studio relaunches in Union Square, home at last after 21 years as guests in an attic

Though Mayor Joe Curtatone did a ribbon-cutting for the Comedy Studio’s reopening Thursday in Somerville’s Union Square, the real start for the club’s 22nd year took place about an hour later, when owner Rick Jenkins took the stage (with a tie cut in half by Curtatone) to host a special show for friends and supporters who helped make the club a reality.

“It’s unbelievable,” Jenkins told the invite-only crowd, identifying one thank-you he needed to make because otherwise “none of this would have happened.”

“I have to say thank you to the Hong Kong,” Jenkins said. “We used to be in the third-floor attic of a Chinese restaurant in Harvard Square. And now, after 21 years of really working on myself and with some really great people, we’re now in the back room of an abandoned warehouse” in Somerville. 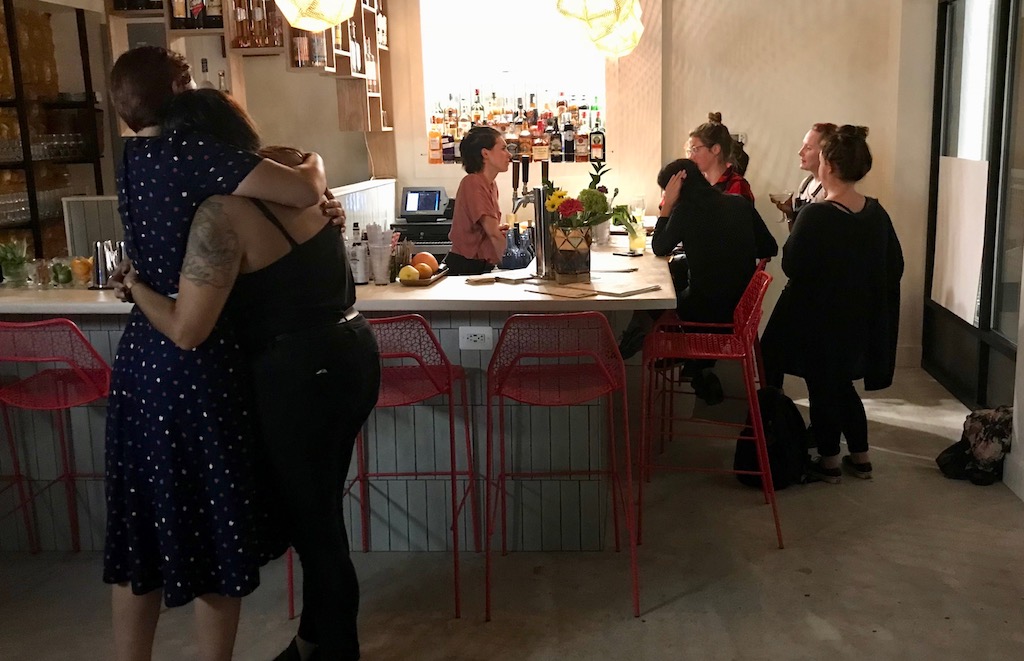 Jenkins announced a year ago that the Comedy Studio was in tough rent negotiations with managers at his former rented home atop the Harvard Square restaurant, where for more than 5,000 shows he and a crew of volunteer comedians had to hustle to set up a comedy club, put on a show in an awkward space lacking a green room for performers, then break it down each night so the Hong Kong could use it as a bar and dance space. Despite it all, the club has launched the careers of stars such as Gary Gulman, Eugene Mirman, Sam Jay, Emma Willmann and Jen Kirkman, and been visited by everyone from Ali Wong and Mike Birbiglia to Anthony Jeselnik and Sarah Silverman.

During negotiations, Jenkins was approached by Zachary Baum and Matthew Boyes-Watson, who had gone from sneaking into Comedy Studio shows to building and managing the Bow Market retail complex in Union Square. They offered him a home, and Jenkins fundraised enough to build from scratch a 100-seat club with a cocktail bar called Variety and upgraded sound, lighting and high-definition video recording capabilities. Instead of having to race to unpack and repack nightly, the space can be a home for comedians and their projects throughout the day, every day, Jenkins has said. 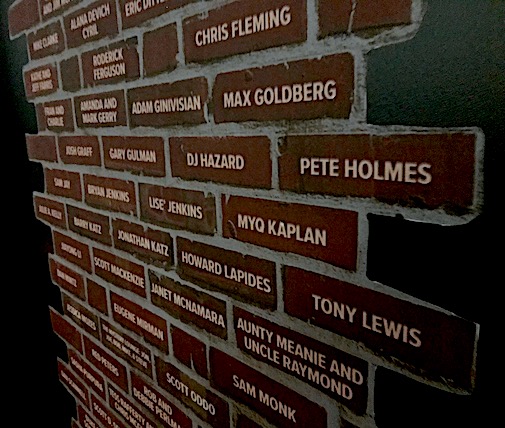 The “Wall of Names” of big financial backers at the relaunched Comedy Studio.

“When we were having negotiations with the Hong Kong, [Baum and Boyes-Watson] came up and said, ‘We’ve got something better,’” Jenkins recalled. “This is better.”

On stage with Jenkins – ahead of sets by comic-in-residence for the month Liam McGuirk, Kathe Farris, Mirman (the “Bob’s Burgers” star solicited audience life advice questions before the show) and Tony V – was a door from the famed Chateau de Ville, once on Route 9 in Framingham, donated for the night by the owner’s family. “All the stars have played there – Liza Minelli and Sammy Davis Jr., Johnny Carson and Johnny Cash – and they had a tradition that when they played the place and they were leaving, they would sign the dressing room door,” Jenkins said. “I thought that would be a good tradition for us to have here, to [have the comics] sign a door as they were leaving.”

So far, signatures have been collected on the stage itself, but that will soon be covered over with proper flooring, Jenkins said. The idea is to be in business long enough to collect another murderer’s row of names like the ones seen on the “Wall of Names” of big Comedy Studio financial backers by the main hall’s entrance – which makes for impressive reading. 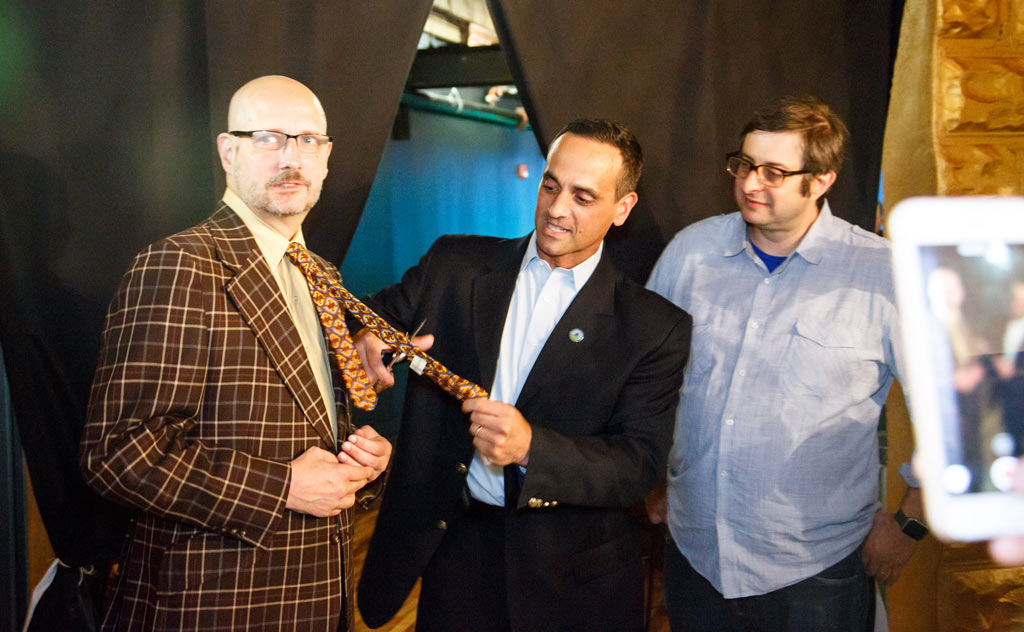